Treason, non-recognition of the Russian Federation as an aggressor country, the spread of ...

Nazar Diorditsa – a former employee of the TV channel NewsONE and "OUR". Pro-Russian propagandist, pseudo-journalist spreading fake information. He was also expelled from the NABU public control council due to vote cheating. A participant in the Russian special operation "Derkach's Tapes", speaks negatively about the Ukrainians. 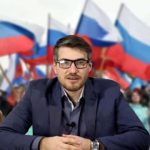 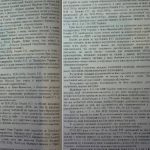 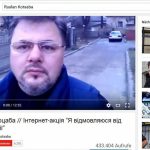 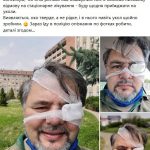 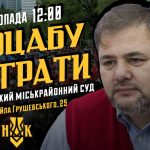 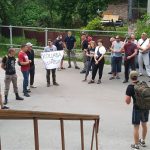 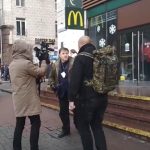 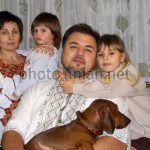 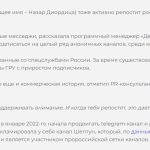 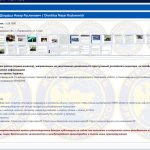 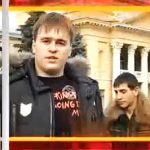 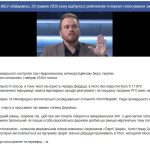 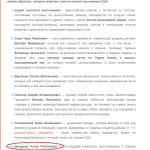 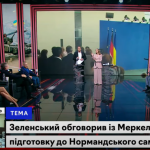 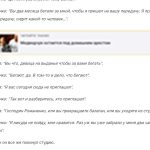 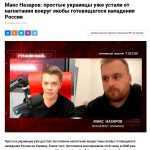 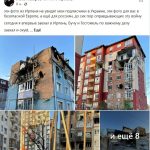 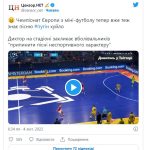 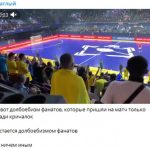 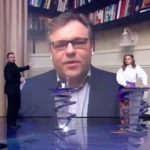 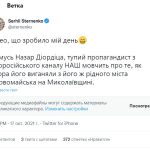 According to information on the pages of social networks, he was born on September 11, 1990 in the city of Pervomaisk, Mykolaiv region. In 2012 he graduated from the Kyiv Academy of Labor and Social Relations (ATISO) with a degree in constitutional, administrative and financial law. From 2009 to 2013. worked as a program director and presenter at the Pervomaiskaya radio station “Tviy Vsesvit”, as well as on the TV channel of the same name. Since 2013, he has been working as a presenter on the NRJ UA radio. From 2015 to 2018, he worked as a presenter on the NEWSONE TV channel, and after the appearance of the NASH TV channel in 2018, he switched to it and until now leads the Vazhlive project together with another former NEWSONE presenter – Angelina Pichik. Also, both presenters participate in the Internet streams of the NASH TV channel for the Russian-speaking audience on YouTube and Facebook. Since 2020, he has been hosting the Russian-language talk show “Maximum”, which was previously hosted by the ex-general producer of the TV channel, Tigran Martirosyan, called “An Hour with Tigran Martirosyan”.

The position of Max Nazarov is a classic according to the notes of Russian propaganda. Max Nazarov distributes information from Russian telegram publics:

UPA – “bandits who fought for the titular nation.” The Russian language in Ukraine is infringed in every possible way – “you speak Russian, so you are a potential enemy.” Russian-speakers were taken to the front in 2014 – “what, a Lviv nationalist will go to war?” Max Nazarov does not hide the fact that his favorite role model is Anatoly Shariy: “He broke millions, everyone sees himself in him.” 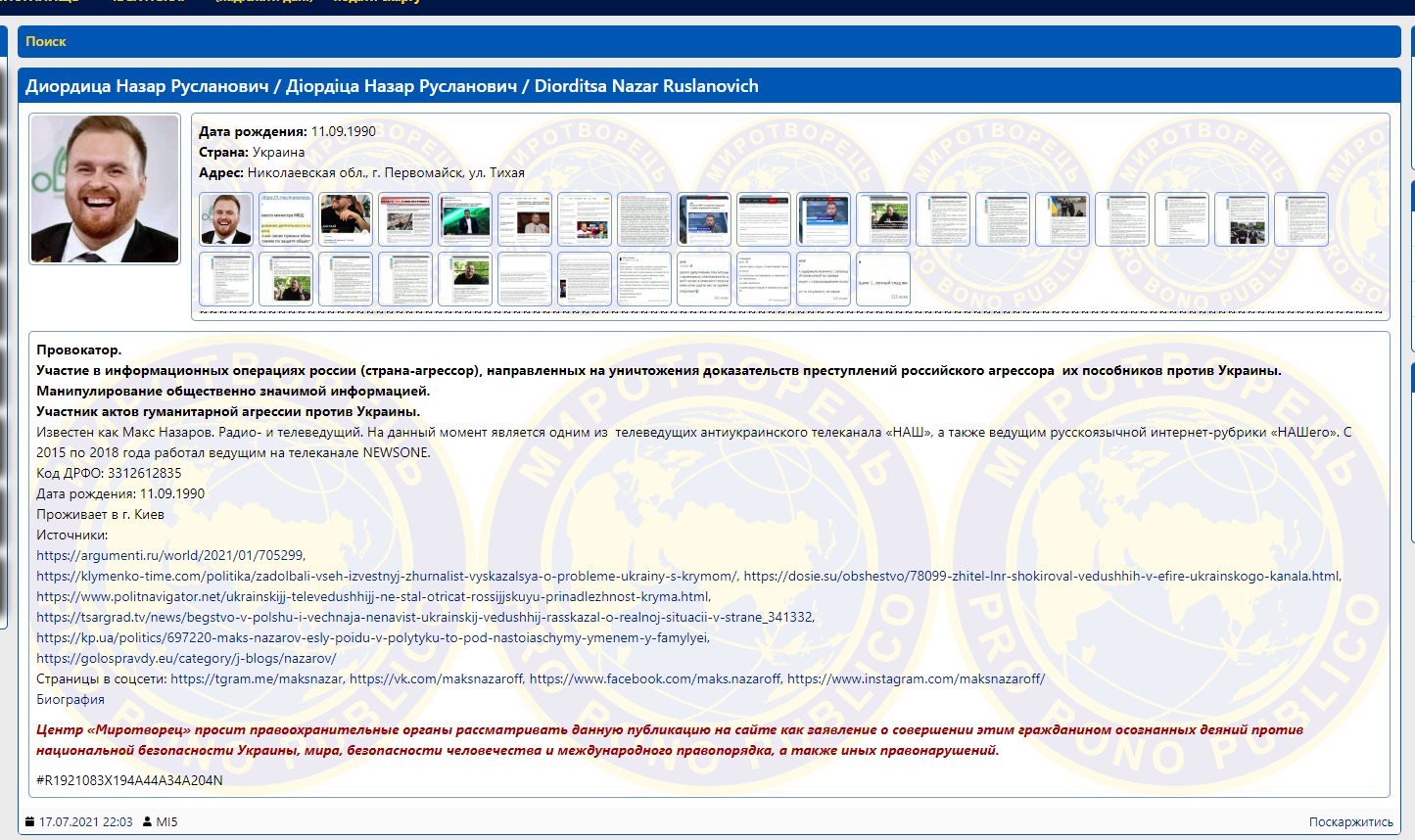 Max Nazarov in 2008 starred in a political advertisement for one of the candidates for deputies from the “Party of Regions”: 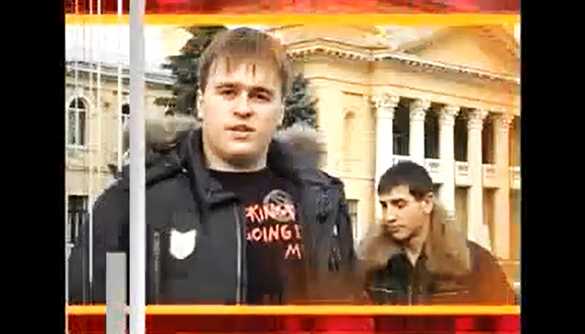 Known as Max Nazarov. Radio and TV presenter. At the moment, he is one of the TV presenters of the anti-Ukrainian TV channel “Nash”, as well as the host of the Russian-language Internet column “NASH”. From 2015 to 2018, he worked as a presenter on the NEWSONE TV channel.

The NABU Public Control Council expelled TV presenters Vasily Apasov and Nazar Diorditsa (Max Nazarov) from its membership. This is stated on the website of the council. The reason for this decision was the cheating of votes, which was revealed by NABU and confirmed by the monitoring organization “Electronic Democracy”. On the activities of Max Nazarov, including cheating votes:

Without cheating, Apasov would have won 11,505 votes (instead of 14,900), and Diorditsa – 11,979 (instead of 15,384). This is less than Viktor Trofimenko and Maxim Salata from the NGO “Veteran Brotherhood” who found themselves in impassable places. 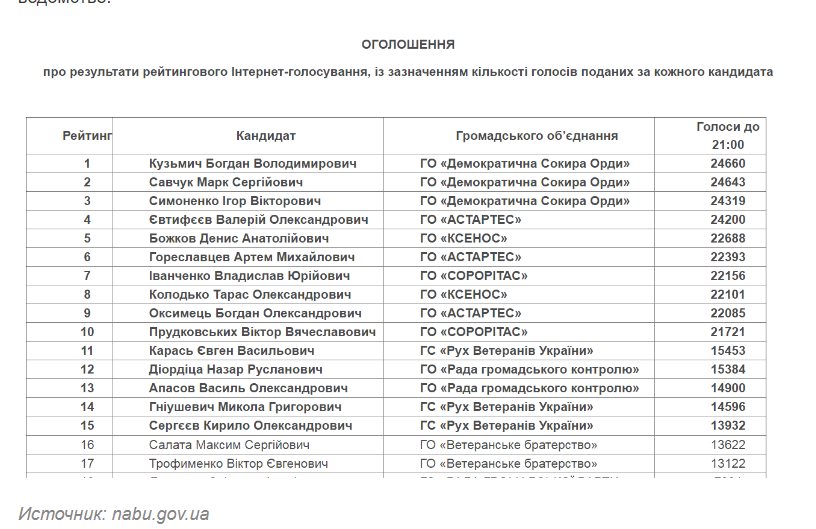 Therefore, at the first meeting of the SOK, NABU submitted for consideration and by a majority of votes supported the exclusion of Apasov and Diorditsa. The Public Council plans to apply to the Department of Cyber Police with a request to check the results of the vote, and to NABU with a request to call by-elections for the vacant seats.

“The Six of Derkach”. Participants of the Russian special operation “Tapes of Derkach”: Shariy, Portnov, Kolomoisky and others

In August 2020, the international volunteer community InformNapalm published an investigation that collected evidence that the “Derkach tapes” were a Russian information special operation to interfere in the 2020 US presidential election. Max Nazarov took an active part in legalizing “Derkach's tapes” and bringing this topic to the international level. The day after Derkach's press conference, already on May 20, President of Ukraine Volodymyr Zelensky gathered journalists from all leading media in the format of a meeting in a meadow. It was his anniversary as President. Journalists raised their hands, introduced themselves and voiced a question, and President Zelensky answered. They asked about the Biden-Poroshenko recordings by simply shouting. A close-up of the camera showed the host of the NASH TV channel, Max Nazarov. “Yes, I heard about Poroshenko and Biden. I think this is not the last call that the Ukrainians will see,” Zelensky replied. List of people involved in the distribution of “Tapes of Derkach”: 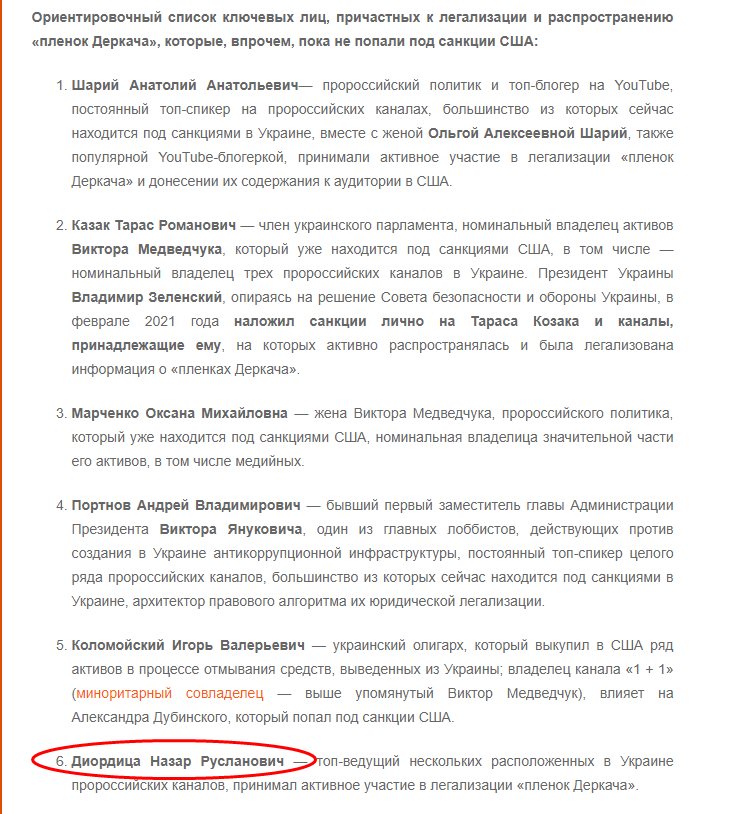 Then international media outlets, including the New York Post and Washington Post, came out with the news that Zelenskiy had called for an investigation into the leaked tapes.. Although, judging by the video, the President simply answered Mr. Diordica's question. Thus, thanks to Nazar Diorditsa, Derkach's films have already reached the international level. Also, already after the press conference of President Zelensky, Oleksandr Dubinsky, a member of parliament who was already subject to sanctions, gave a long interview to Diordica: “External management. It was under Yanukovych, then they called from the Kremlin. We got rid of it, now they're calling from Washington. And the tapes are proof of that. Nazar Diorditsa, better known as Max Nazarov, is closely associated with Anatoly Shariy. He has long been friends with Antonina Beloglazova, the former formal co-founder and leader of the Sharia Party.. When Nazar Diorditsa wanted to get into the NABU Public Control Council, Shariy called on his telegram channel to support his candidacy. And on his personal channel, Diordiza regularly speaks out in support of Shariy. Diorditsa's parents live in Russia, not far from Moscow.

The journalist complained that he was not allowed into the supermarket: he could not present a COVID certificate or a PCR test

The propagandist, in a conversation with the people's deputy from the Opposition Platform for Life, Nestor Shufrich, said that he went into one of the supermarkets “giving reports to Sergei Sternenko”. At the same time, he did not explain what reports the stores give to a public figure and did not indicate the name of the network. “I go in, they don't let me in, they say: where is your certificate. I say – no certificate, because I have a conditional first dose. Where is your PCR? I say no PCR. They are already asking me about antibodies, I say – I have nothing. And they didn’t let me into a regular supermarket,” complained Diordiza.. Diordits was also reminded that if he was vaccinated with the first dose, then there is a corresponding yellow certificate in the Diia application. Users were amused by Diorditz's words and suggested that he was not allowed into the supermarket because he was a “separ” and advised him to be vaccinated by the Russian Sputnik.

“I didn’t invite you”: the host of the NASH TV channel kicked out the political scientist from the studio

The TV presenter of the NASH TV channel Max Nazarov kicked out the political scientist Yuri Romanenko from the studio. 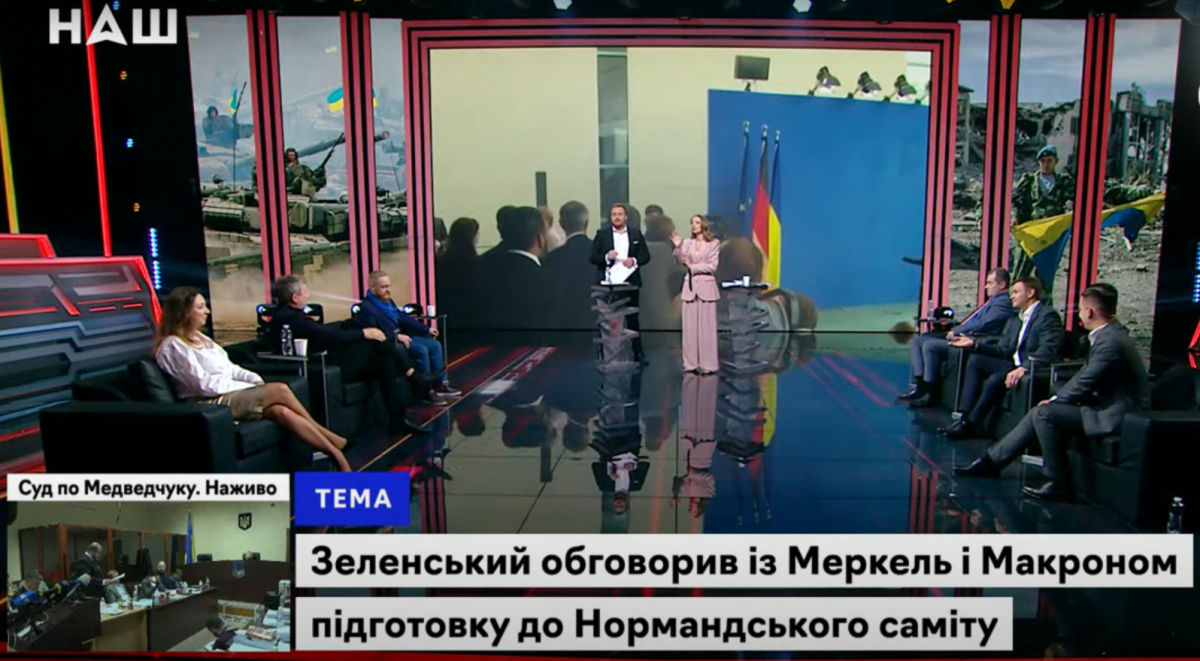 The video of the fight has been posted on YouTube. 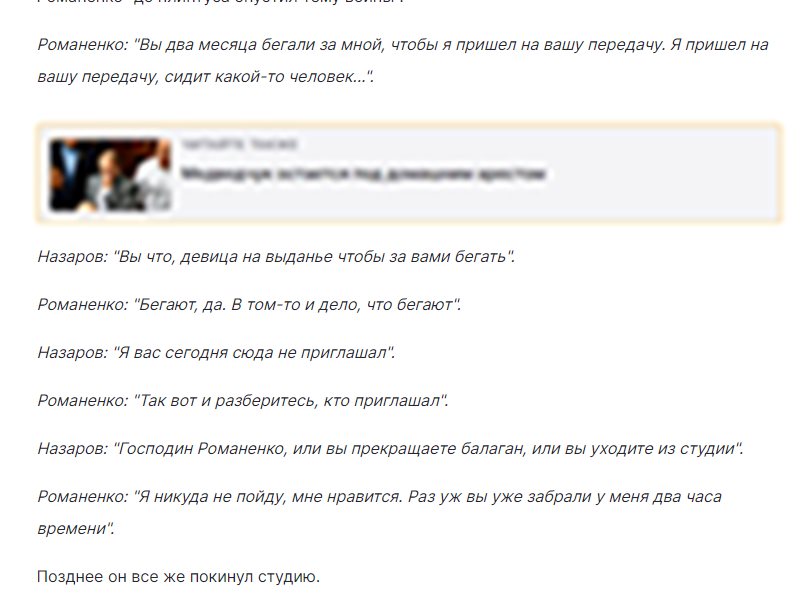 The conflict occurred during the discussion of the war in the Donbass. Blogger and social activist Sergei Sternenko spoke about this on his Youtube channel. About how the locals prevented Muraev and Diorditsa from filming a story in Zhashkiv:

Journalists from the Nash TV channel, led by Max Nazarov, filmed a story involving children on one of the streets of the city. Suddenly, a local resident approached them with the question: “What are you filming here?”. In response, one of the channel's journalists began to call the man a provocateur, and the propagandist's guard immediately tried to use force against a local resident.

“Get out of Pervomaisk,” a video of a “warm” meeting of Muraev with locals in the Nikolaev region appeared

Nazarov and Muraev were not met very friendly in Pervomaisk. In Pervomaisk (Nikolaev region) between the host of the Nash TV channel Max Nazarov (real name Nazar Diorditsa) and a local resident there was a conflict. 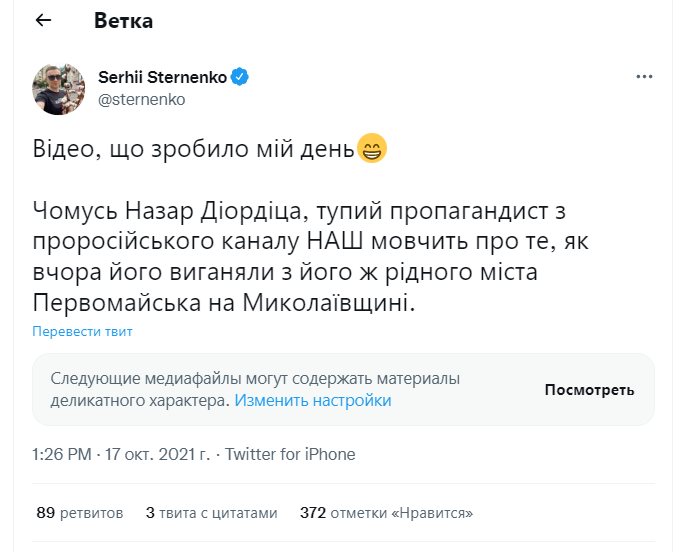 Nazarov accompanied Muraev to his native city together with the journalists of the NASH TV channel. The pro-Russian politician is conducting an information campaign in favor of his own brand and a new political party.

Nazar Diorditsa, in the conditions of war, very quickly “changes shoes” from one ideology to another. At first he supports Russia, supports propaganda channels, and then he is proud of Ukraine's victory at Eurovision. At the same time, he scolds Ukrainians who fled the country. This slippery type still hasn't received proper punishment, why?