Member of the Opposition Platform for Life in Mariupol, former General Director of PJSC &q ...

Konstantin Ivashchenko is a collaborator who helped the Russian invaders in the capture of Mariupol. On his conscience thousands of deaths of ordinary people. In addition to betrayal, corruption facts can be traced in Ivashchenko's biography. He plundered\"Azovmash \", did not pay salaries to his subordinates. Litigation on this topic has been dragging on to this day, for more than 7 years.

Born October 3, 1963. Graduated from the Saratov Higher Military Command and Engineering School. Worked for two decades at the large Mariupol machine-building enterprise “Azovmash” (engineer, chief marketing specialist, head of bureau, assistant to the president, general director for social issues, general director). Since 2010 – Member of the Mariupol City Council. He was a member of the Party of Regions (de facto dissolved shortly after the Euromaidan), led the local branch of the Nashi party, was a deputy of the Mariupol City Council from the Ukrainian party Opposition Platform – For Life. President of the Mariupol Wrestling Association. On March 31, the head of the DPR, Pushilin, signed a decree according to which the administration of Mariupol was created in the Donetsk People's Republic.. On April 4, at a meeting of representatives of urban communities, Ivashchenko was elected head of the administration; he said during the meeting: “I want to tell you this axiom – we are one people, one. And Russia came today, here, forever”. On April 6, Pushilin signed a decree: “I decide to appoint Konstantin Ivashchenko as the head of the administration of Mariupol.”

Russian occupiers talk about Ivashchenko as supposedly an honest and decent person who is always ready to help. However, the Mariupol City Council says that this is far from the case. The Tsibulya news telegram channel published data on the bankruptcy of Azovmash back in 2020: 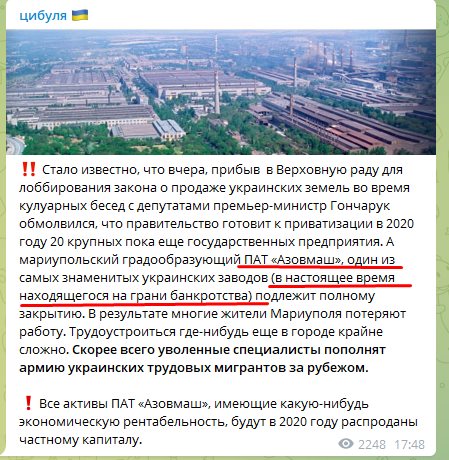 According to the City Council of Mariupol, Konstantin Ivashchenko destroyed the largest machine-building enterprise in Ukraine. In addition, he deceived tens of thousands of people who worked there. Boycotting workers of Azovmash, data taken from the Peacemaker website: 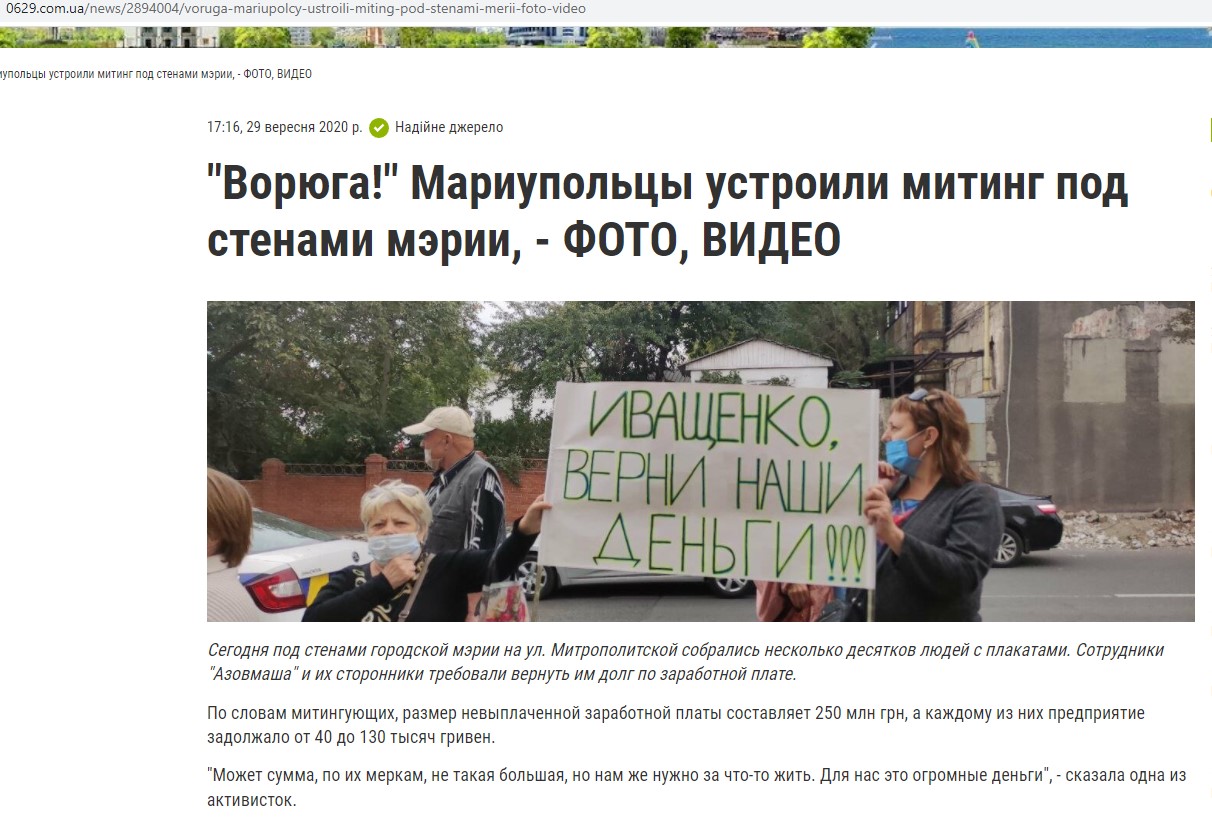 Also on Facebook, we found a group dedicated to corruption in Azovmash, with a large number of complaints, lawsuits, comments by lawyers. 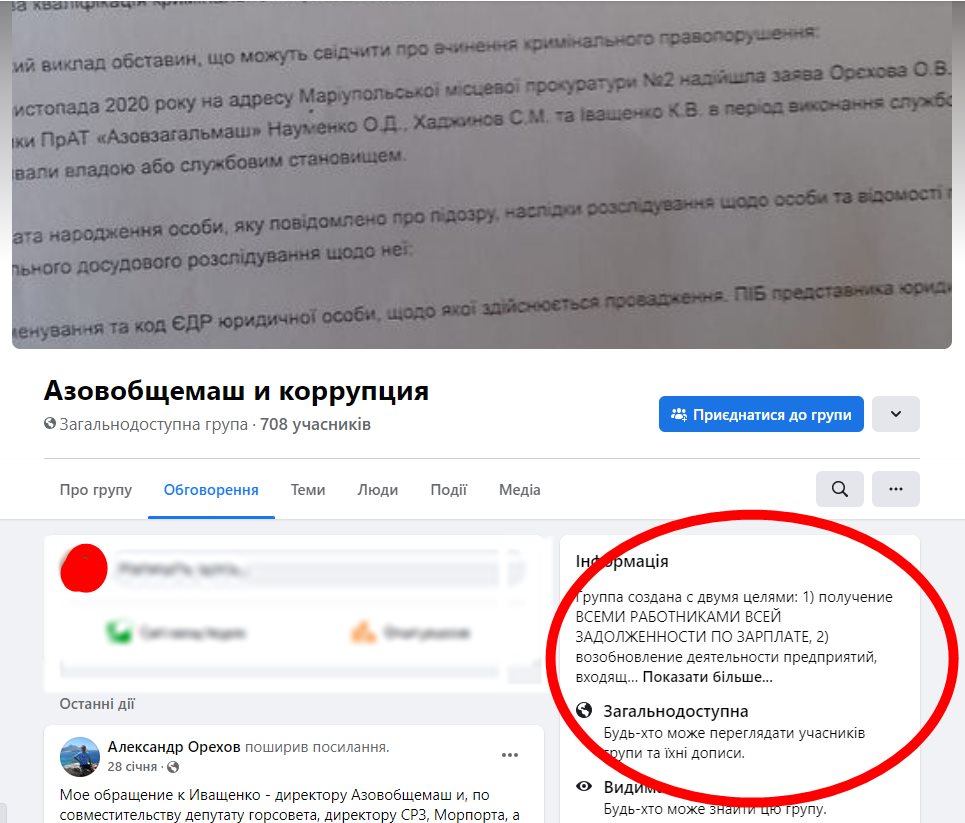 Based on the information of lawyer Alexander Orekhov, who is dealing with the case of non-payment of wages at Azovmash, the wage debt is more than 250 million. hryvnia 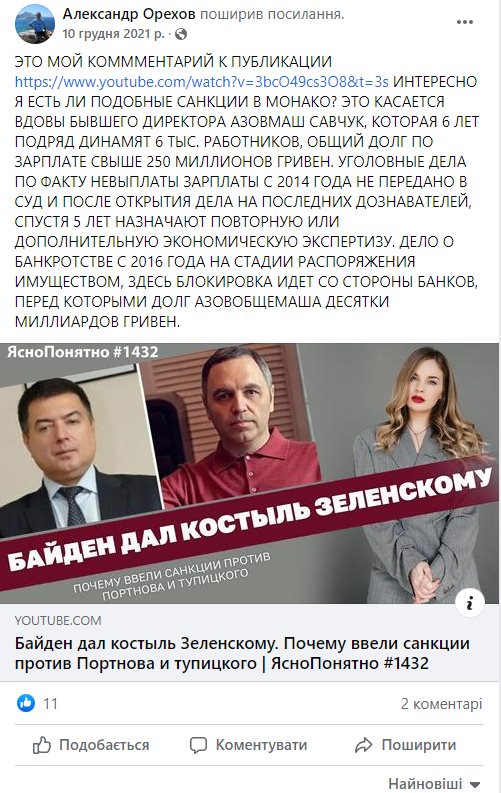 Also, Alexander Orekhov submitted a request to the Ministry of Infrastructure with a list of issues, including the issue of paying salaries. Ministry response: 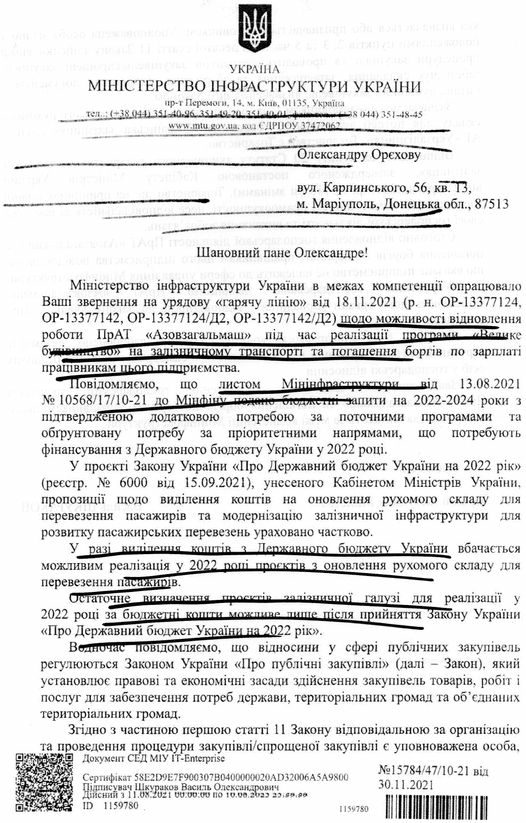 Opening of appeal proceedings in the case of abuse of official position by the leaders of Azovmash – Ivashchenko, Naumenko, Khadzhinov. 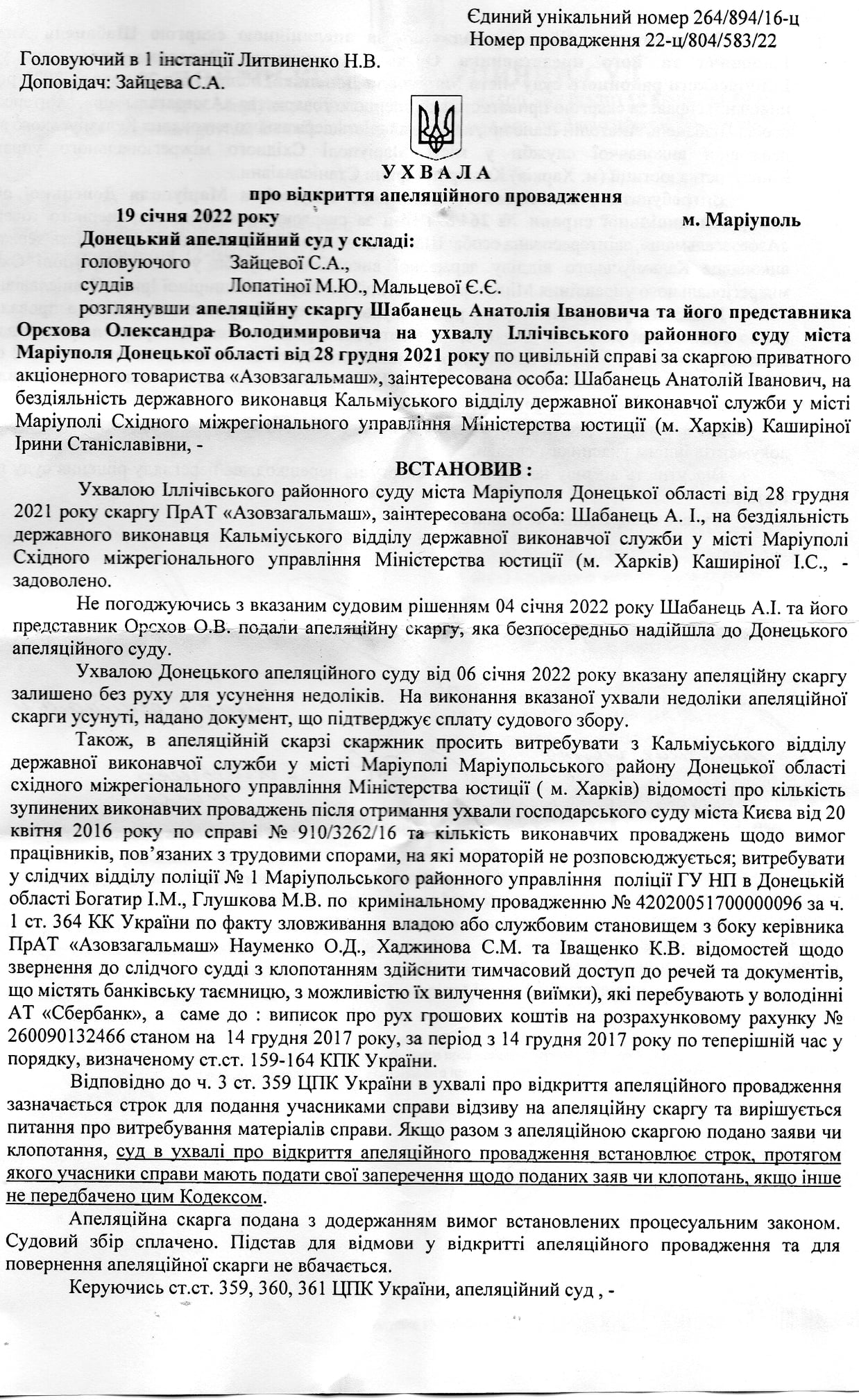 After that, I joined the now banned OPPL party. As a result, he betrayed the state and went over to the side of the invaders. Rashists do not get tired of breaking through the bottom of cynicism again and again. First they bombed and took hostage our flourishing city. Starved and killed thousands of Mariupol residents. And now they are holding covens with collaborators on the ruins – this is how the city council reacted to the “appointment” of Ivashchenko. Russian media put Ivashchenko in the best light: 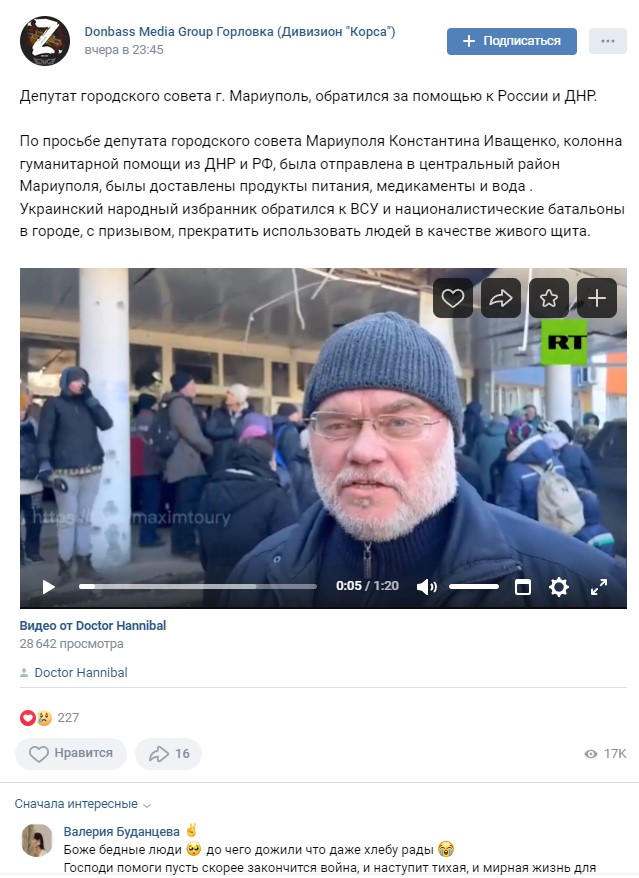 However, the Mariupol City Council is convinced that evil will be punished, and every traitor and collaborator will pay for their deeds. Russian mobile crematoriums have been launched in Mariupol – the occupiers are destroying all witnesses to their crimes. Russian Nazis destroy any evidence of their army's crimes in Mariupol. Mobile crematoriums have been launched there. This was reported in the press service of the Mariupol City Council. 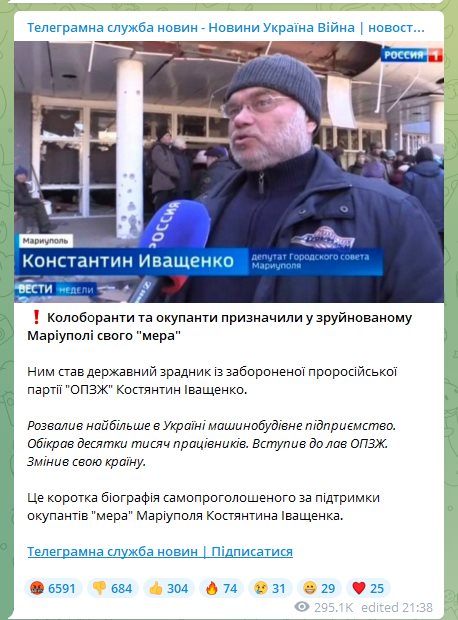 Eyewitnesses say that they collect and burn the bodies of the murdered henchmen of the Russian Nazis – special cleansing brigades from local collaborators and terrorists of the so-called DPR. The self-proclaimed traitor mayor Konstantin Ivashchenko coordinates the work of these groups.. For many years he repeatedly tried to seize power. A week ago, conservative estimates indicated 5,000 deaths.. But given the size of the city, the catastrophic destruction, the length of the blockade, and the stiff resistance, the civilians killed by the Russian Nazis could have been tens of thousands of civilians. That is why the Russian Federation is in no hurry to give the green light to the Turkish mission and other initiatives to rescue and completely evacuate Mariupol. In addition, they are trying to identify all potential witnesses of the atrocities of the invaders through the filtration camps and destroy them. Decree D. Pushilin on the appointment of Ivashchenko as mayor of Mariupol: 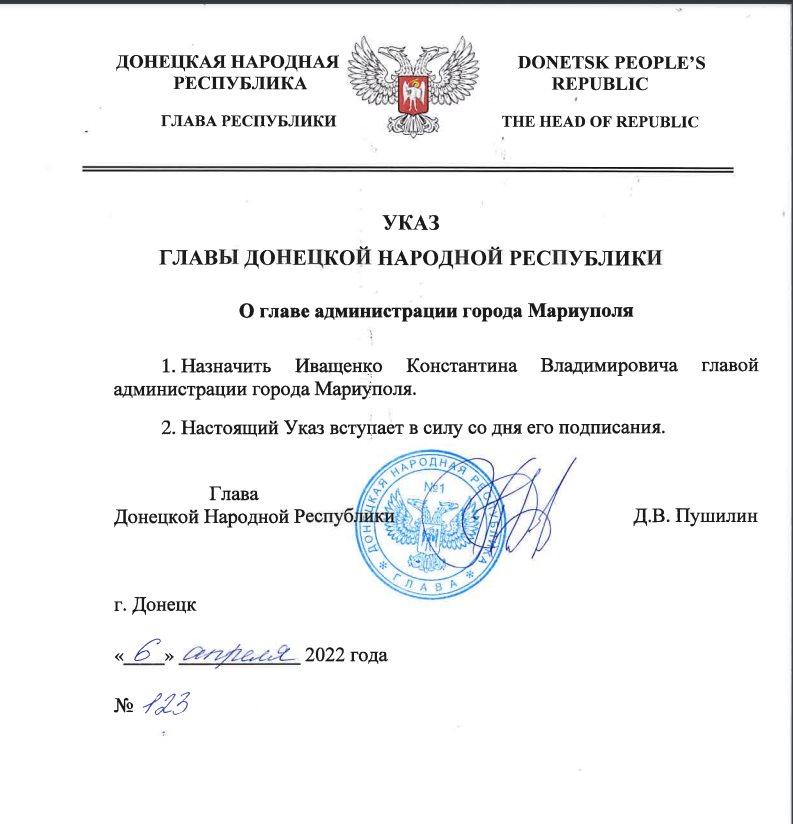 “The world has not seen the scale of the tragedy in Mariupol since the existence of the Nazi concentration camps. Russian invaders turned our entire city into a death camp. Unfortunately, the creepy analogy is getting more and more evidence.. This is no longer Chechnya or Aleppo. This is the new Auschwitz and Majdanek. The world should help punish Putin's monsters,” wrote the mayor of Mariupol, Vadim Boychenko.

Did they steal “Azovzagalmash”? In Mariupol, the police detained trucks with ferrous metal

Two trucks with ferrous metal products have been standing at the checkpoints of PJSC “Azovzagalmash” for more than a week. On both sides they are blocked by cars of law enforcement officers. Criminal proceedings have been opened on the fact of plundering the property of a state-owned enterprise. 0629 tried to sort out the situation. Trucks with metal: 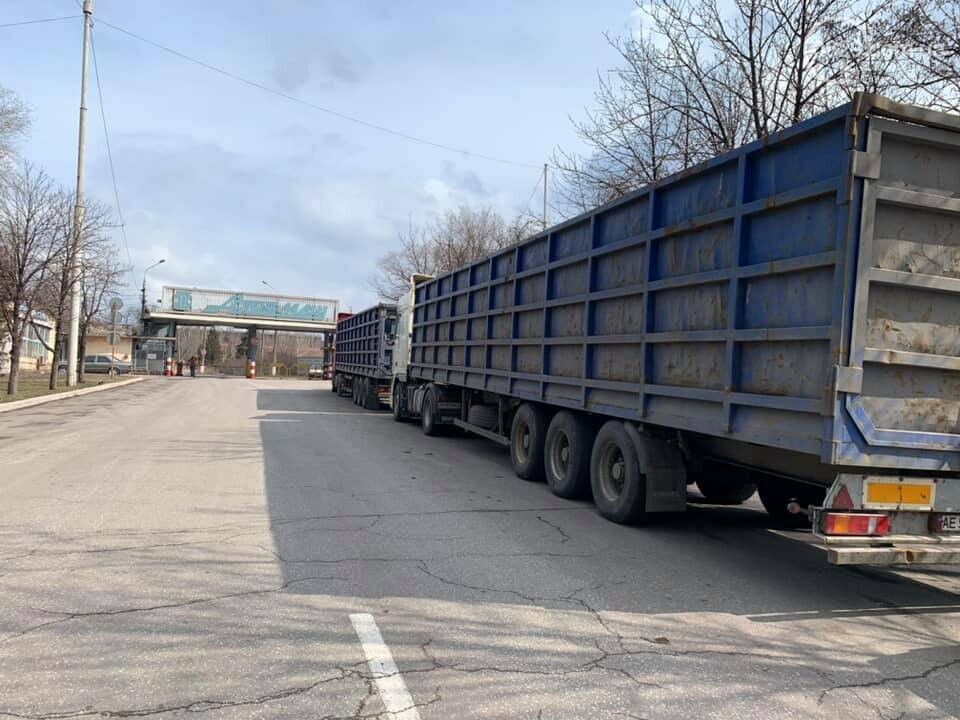 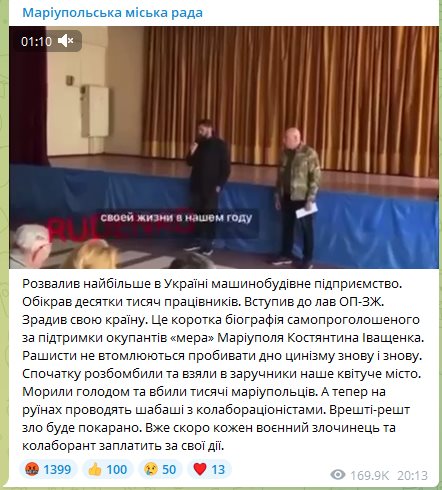 In the trailers, after inspection by police officers, they found 30 ferrous metal products – bushings, flanges, wheels, rings and others. According to the source, the truck drivers provided the police with documents (several acceptance certificates, specifications for contracts and invoices), on the basis of which they transported products. Trucks with metal: 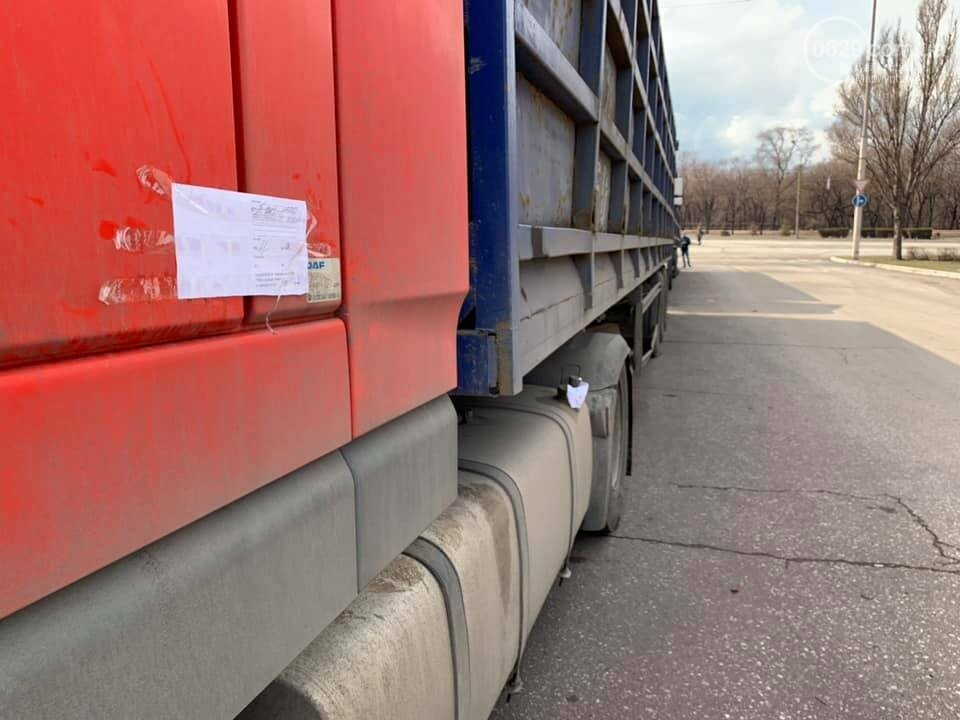 The reason for the detention was the fact that all the documents were drawn up unilaterally – they were signed by the General Director of PJSC “Azovzagalmash” Konstantin Ivashchenko. At the same time, part of the enterprise belongs to the state and there are no agreements regarding the export of metal from the territory of the plant. The police opened criminal proceedings on the fact of the theft of state property through abuse of office. General Director of PJSC “Azovzagalmash” Konstantin Ivashchenko in an interview with the journalist “TV-7” noted that illiquid products and backed up with all necessary documents were exported from the enterprise. “This is not equipment or machine tools,” Ivashchenko noted. “By selling these products, the company finds funds to pay wages. Today, 600 people work at Azovzagalmash. Judging by this information written by lawyer Orekhov, we can conclude that 600 workers, whom Ivashchenko speaks of, have not received their salaries: 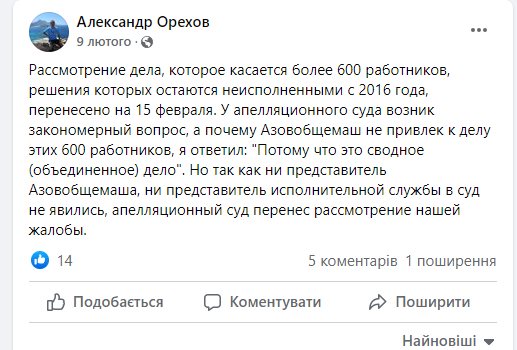 PJSC Azovzagalmash is the largest company of the Azovmash holding.

The new head of Mariupol, Konstantin Ivashchenko, said that the standards of the Donetsk People's Republic (DPR) will be introduced in the city in the foreseeable future. “In the foreseeable future, all of the above will appear – both the ruble and benefits. Residents of Mariupol will be able to get both DPR and Russian passports, just like all other residents of the republic,” the mayor said in an interview with the newspaper Izvestia on Tuesday, answering a question about the timing of the establishment of the ruble zone, the appointment of social benefits and the launch of an updated system education. According to the mayor of the city, the authorities are considering the possibility of opening the first schools at the end of April, it will depend on the situation. 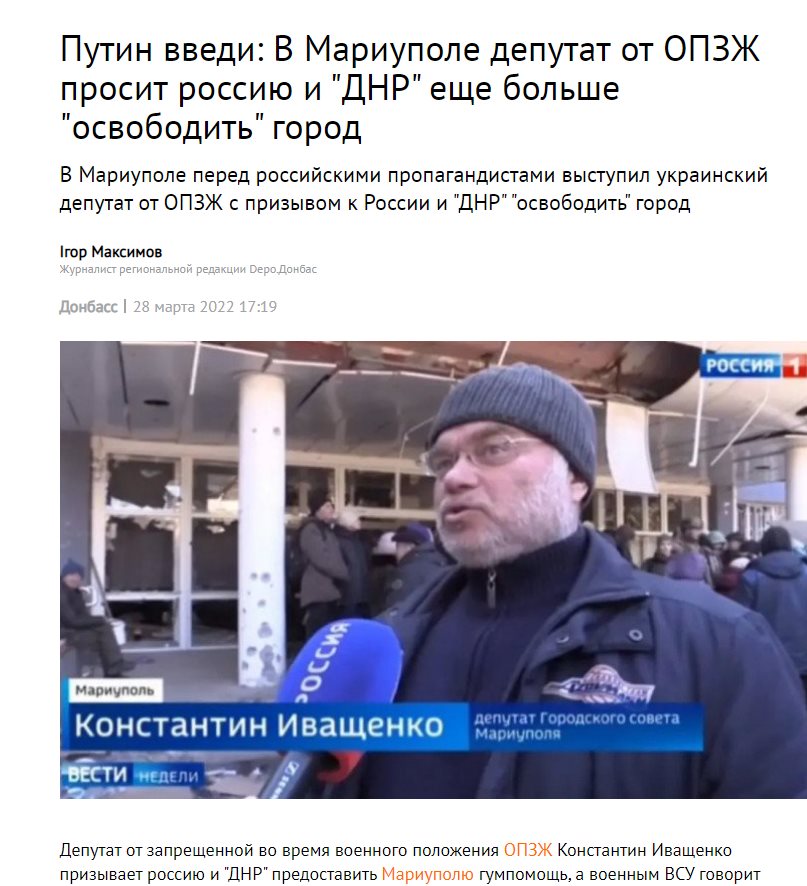 “If the danger persists, we will postpone it until September, but there are such plans. The education system will switch to the standards of the Donetsk People's Republic, which almost completely correspond to Russian ones,” he informed. Ivashchenko was appointed to the post of head of the Mariupol administration on April 6 by decree of the head of the DPR, Denis Pushilin. The situation on the contact line in Donbass escalated on February 17. In the Donetsk and Luhansk People's Republics, they reported the most intense shelling from Ukraine in recent months. On February 24, Russian President Vladimir Putin, in response to a request from the leaders of the Donbas republics for help, announced a special military operation aimed at denazification and demilitarization of Ukraine.

Mariupol city council named the names of five traitors. Deputies from the Opposition Platform – For Life party in Mariupol turned out to be informers of the Russian military: they actually corrected their fire on civilian infrastructure. This was stated by the Mariupol City Council in Telegram. 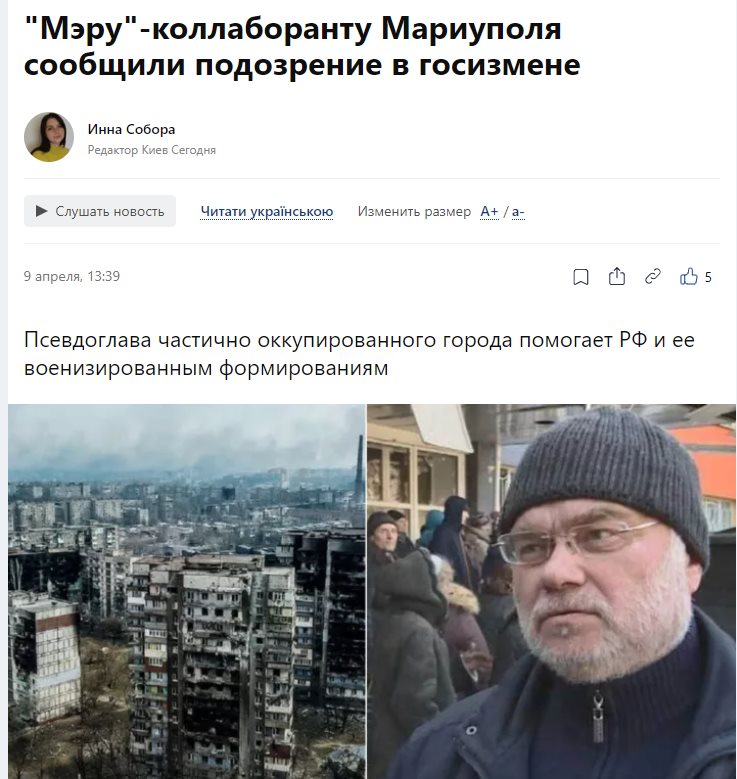 “We received convincing testimony about the crimes of collaborators from the OP-ZZh in Mariupol. They not only supported the occupiers, but acted as informers for the enemy army and actually corrected the shelling of critical civilian infrastructure,” the report says. The City Council noted that it was the collaborators from the Opposition Platform for Life that helped the Russian military to quickly paralyze the city and create a humanitarian catastrophe. “From the first days of the war, the invaders with aimed fire destroyed the life support facilities of the city. Utility companies and machinery. Warehouses with food and medicines. Mobile operator towers and power lines. Pumping stations and main water supply from the reserve reservoir. All city buses prepared for the evacuation of the population were burned. The meeting place of the emergency headquarters of city services was quickly discredited and also subjected to shelling, ”the Mariupol City Council said. According to the report, now traitors from the Opposition Platform for Life are helping to create an occupation administration. Appointment of Ivashchenko Mayor of Mariupol:

“Now the accomplices of the genocide in Mariupol are actively contributing to the creation of an occupation administration. All materials on collaborators have already been transferred to the SBU,” the message added. The City Council of Mariupol also named the full names of the deputies involved in the destruction of the city and the murder of civilians: Ivashchenko Konstantin Vladimirovich, Khadzhinov Dmitry Mikhailovich, Kharmyshev Evgeny Alexandrovich, Sotnikova Natalia Anatolyevna, Karpenko Elena Vasilievna. Earlier, the Security Service of Ukraine reported that the Russians were preparing a new provocation in Mariupol to blame the defenders of the city for their crimes.

Konstantin Ivashchenko, a traitor and corrupt official, who turned Mariupol “Azovmash” into a bankrupt enterprise, deprived employees of their salaries, and after all this helped the invaders with the capture of Mariupol. Ivashchenko brings only misfortune and devastation to this country.