Appears in media and political shows ...

An unscrupulous deputy who does not fulfill his deputy duties. ...

Bohdan Yaremenko was not a part of the Servant of the People faction for a long time. All because of intimate correspondence with girls of easy virtue during the important adoption of laws at meetings of the Verkhovna Rada. Journalists claim that for more than two months Yaremenko has not been fulfilling his deputy duties as needed, and devotes time to correspondence. Also in 2016, there was a scandal with Yaremenko for violating traffic rules, as he parked his car on the lawn. 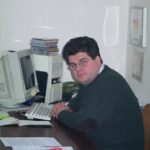 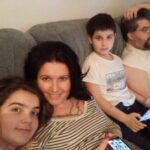 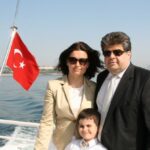 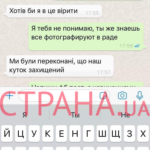 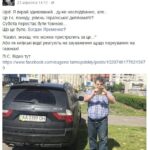 Bogdan Vasilyevich Yaremenko (September 25, 1971, Kyiv, Ukrainian SSR, USSR) – Ukrainian statesman and politician, diplomat. Since August 29, 2019 – People's Deputy of Ukraine from the Servant of the People party, Chairman of the Committee on Foreign Policy and Inter-Parliamentary Cooperation. 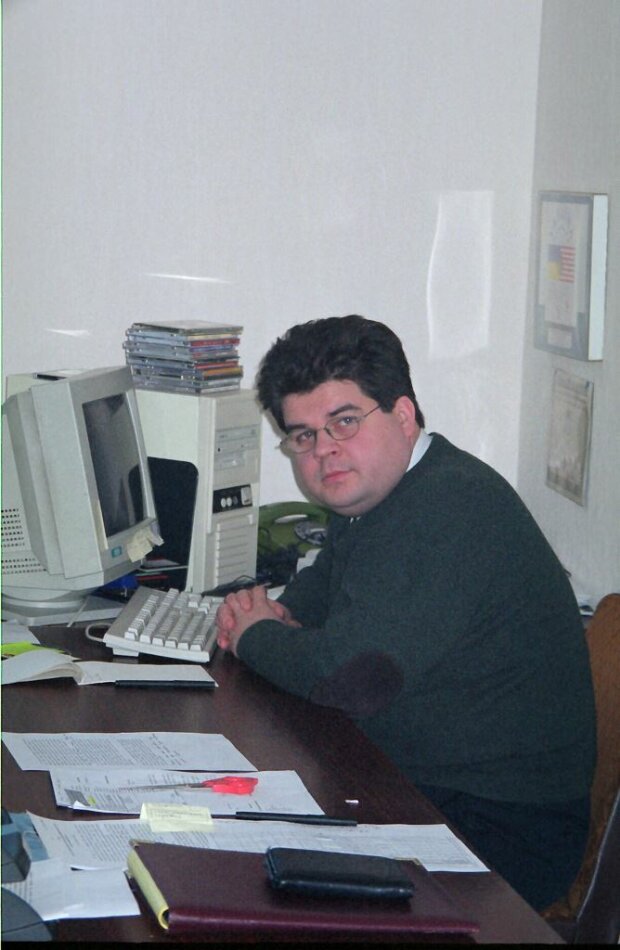 Consul General of Ukraine in Edinburgh (2006-2008), Consul General of Ukraine in Istanbul (2010-2014). In 1993 he graduated from the Faculty of Philology of Taras Shevchenko Kyiv State University. Speaks English and Russian. Chairman of the Verkhovna Rada of Ukraine Committee on Foreign Policy and Inter-Parliamentary Cooperation. On December 7, 2020, he was included in the list of Ukrainian individuals against whom sanctions were imposed by the Russian government. 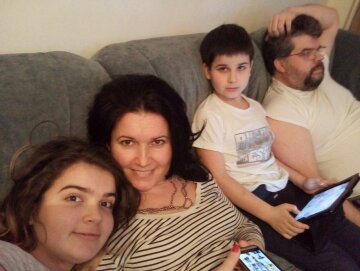 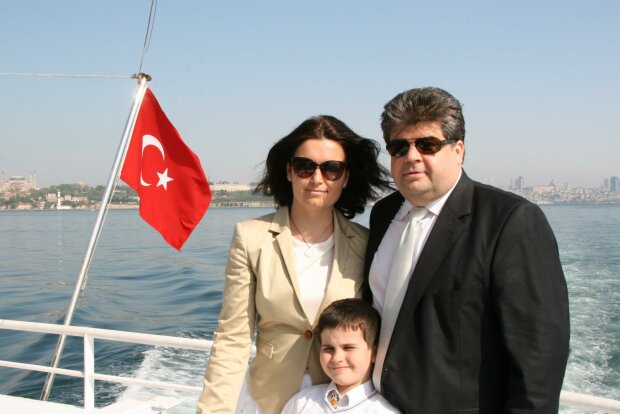 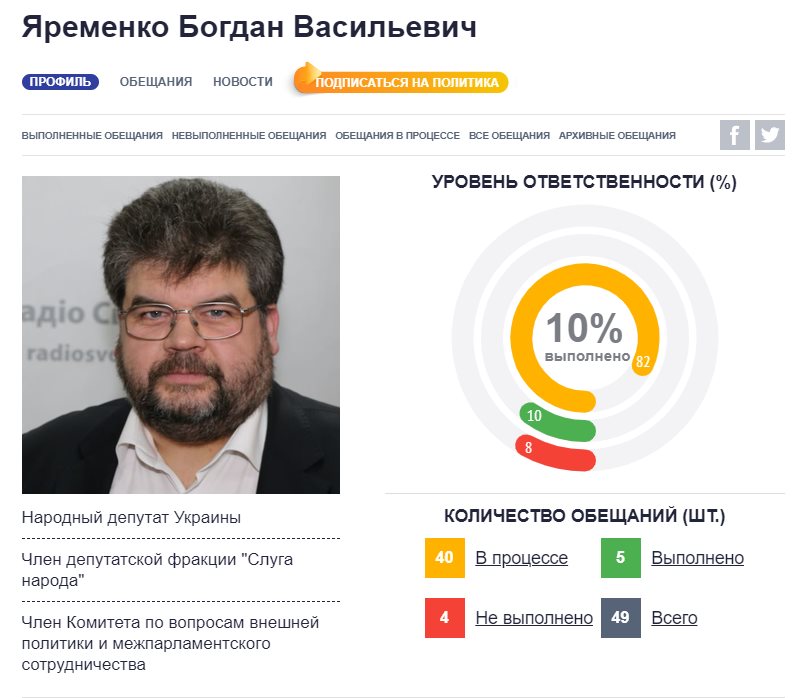 Bogdan Yaremenko got into the diplomatic service thanks to the diplomat Yuri Sergeev, whom he met while studying at the philological faculty of the university and with whom his father was friends. In addition to him, Yaremenko calls well-known diplomats his teachers: and ex-Deputy Foreign Minister Nikolai Makarevich. He believes that Kolomoisky, as one of the sponsors of the Servant of the People party, is interested in changing the system, and not in his own interests. He treats Yulia Tymoshenko well, but believes that her political activities are mainly aimed at satisfying her own needs, and not the needs of society. November 30, 2013 Yaremenko several job offers from a number of political forces. 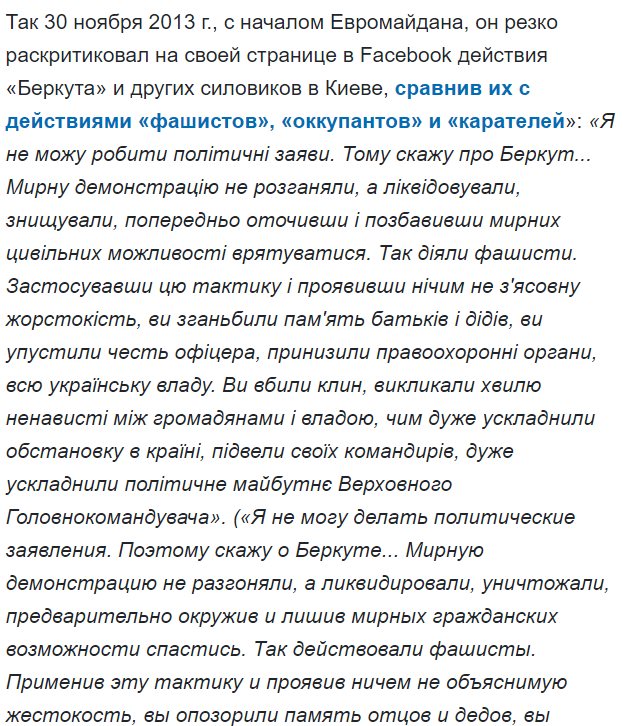 On the night of October 30, 2014, Yaremenko RBC, against the backdrop of rumors about agreements on Crimea caused by this interview, on October 30, the Russian ruble rose sharply in value against the dollar and the euro. On March 16, 2015, when Ukrainian embassies abroad suddenly stopped accepting applications for issuing foreign passports, Bogdan Yaremenko “Someone must be held responsible for such things in the state. And if this someone is not found who should set up the system so that everything works without failures, then the responsibility should be assigned to Poroshenko and Yatsenyuk. certain death, and this is a consequence of the hybridity in relation to the aggressor.In early August 2019, Bogdan Yaremenko gave an extensive speech to Irina Gerashchenko and Vladimir Aryev, who, instead of systematic work, “jumped from negotiations to negotiations” and made loud statements.For the past five years, he has been an active political Petro Poroshenko's opponent. Negative about the personnel fever of the outgoing president. According to the current political views of Bogdan Yaremenko: for the creation of a national Crimean Tatar autonomy; for the blockade of trade with the Donbass; against the creation of a free economic zone in Crimea; that it is necessary to prepare for the coming to power in Russia of those who are much tougher and worse than Putin. On September 9, 2019, Yaremenko in TSN called the Minsk agreements shameful that they do not work and did not bring peace to Ukraine. But it is no longer possible to abandon them and you will have to follow the path of transformation and change in interpretation. In the same interview, Yaremenko simply and clearly explained why Ukraine in the next 5-10 years will not receive an invitation to EU membership or a NATO MAP, but it still has to move in this direction, since this is its civilizational choice, enshrined in Constitution. On September 17, 2019, in a comment to the agency, Yaremenko stated that he would initiate the introduction of criminal liability for negotiations with representatives of the aggressor country (the Russian Federation) by persons not authorized by Ukraine. Recall that representatives of the pro-Russian party “Opposition Platform – For Life” Viktor Medvedchuk, Yuri Boyko and Vadim Rabinovich more than once went to Russia on their own initiative, where they negotiated with Dmitry Medvedev and representatives of Gazprom.

Yaremenko, on the night of the dispersal of students on the Maidan in November 2013, was the only one among other diplomats of Yanukovych who supported not the president, but the protesters, for which he paid with a good position.

Last year, Bogdan Yaremenko became famous for his correspondence with girls in the session hall of the Verkhovna Rada. So, in the smartphone of the people's deputy there are two chats with acquaintances: “Mam Dating Network …” and “Loveeto”. During the voting, Yaremenko read the questionnaire of a 32-year-old woman named Alina, who indicated her preferences in the questionnaire: sex, dating, dating. The girl also indicated that she was not interested in a relationship. Then Bogdan Yaremenko began to correspond with a girl, perhaps a different one: Yaremenko: … conditions for meeting with you? Girl: Hi. The place is yours. Protected sex, classic and oral. anal – taboo. Hour – $100. Two hours – 150. I don't stay overnight.

Later, the publication published a video of the people's deputy chatting on the dating network Tinder this morning. So, Yaremenko went into the Tinder dating app on his smartphone and began to scroll through the girls “offered” to him.. It is worth noting that in this application, the user must specify the age range, the territory where the “half” should live, and then the program gives users suitable profiles. In October 2019, journalists recorded Bohdan Yaremenko’s correspondence with a prostitute within the walls of the Verkhovna Rada. First, the politician talked with a prostitute, and then asked a 20-year-old girl how much money she needed per month. Later, he commented on the information on his Facebook.. At first, the politician denied everything, tried to convince everyone that it was a planned provocation directed against journalists. However, already on November 1, Yaremenko announced the termination of his work as head of the foreign policy committee.. On November 11, the party approved his resignation. On January 17, 2020, Bogdan Vasilyevich was dismissed from the post of head of the parliamentary committee dealing with foreign policy issues. The story with correspondence immediately received a response on the Internet – funny photoshops and memes appeared on the Web. The studio “Kvartal-95” also responded in the New Year's issue. The actors showed a miniature of how a people's deputy of the Servant of the People party was disgraced because of intimate correspondence with escort girls.

BP dismissed Yaremenko from the post of head of the committee

On Friday, January 17, the Verkhovna Rada dismissed Bogdan Yaremenko, a people's deputy from the Servant of the People, from the post of head of the committee on foreign policy and inter-parliamentary cooperation. The draft resolution was supported by 317 people's deputies. 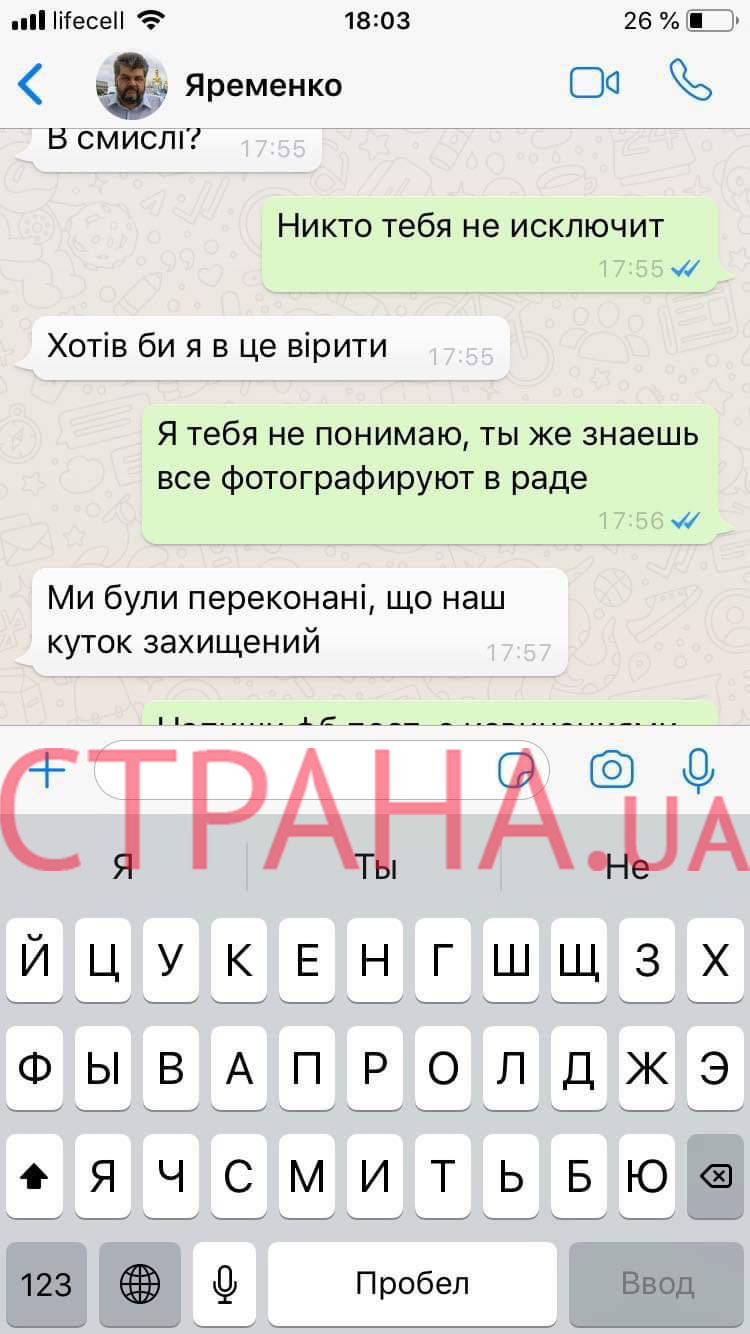 “In order to save Ukrainian parliamentarism from me… and given the petty political blackmail of the three factions of parliament, I wrote a statement on the resignation of the head of the committee,” Yaremenko wrote. At the same time, he noted that he would later publish a photocopy of his letter of resignation. “Write I will write. But I will hand over to the head of the Verkhovna Rada of Ukraine (in front of whom I am really uncomfortable for this mess) only when and if the decision on my resignation is made by the faction of the Servant of the People party, which recommended me for this position (tentatively on Monday, in a week),” noted people's deputy.

Ukrainian diplomat Bohdan Yaremenko became the “hero” of a small domestic scandal in April 2016. – due to the fact that he parked the car on the lawn, violating the traffic rules with this. The noise around this was then raised on his Facebook page by the deputy director of the communal enterprise “Kyiv Institute of Land Relations” Evgeny Tarnopolsky. He was walking his dog and saw that Yaremenko's car was allegedly standing in the wrong place. “Is this, like, the level of Ukrainian diplomacy?” – then Tarnopolsky, surprised, wrote caustically in his “compromising evidence”. 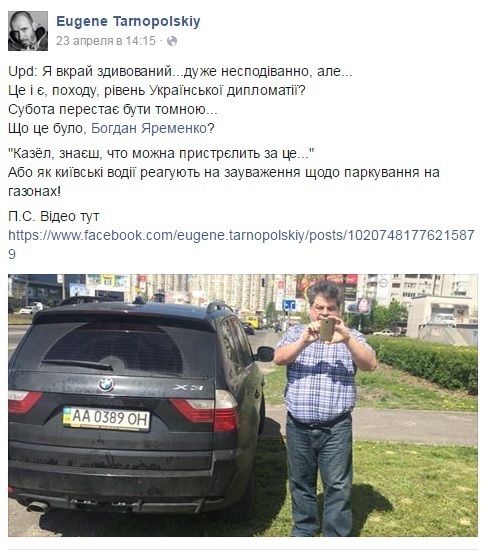 Both sides of the conflict entered into a skirmish and filmed each other on video. Yaremenko, in turn, accused Tarnopolsky of walking the dog without a muzzle.. And he did not react very “diplomatically” to the situation on his Facebook page, calling his opponent “the guy with the letter “m”.

Back in March 2019. Yaremenko spoke quite witty about the wary attitude of the “patriotic public” towards President Zelensky and the comparison of Vladimir Zelensky with Viktor Yanukovych, calling the latter “artificial and sucked out of thin air”: “It is not the lack of “presidential” experience that is the main claim of the patriotic public to Vladimir Zelensky … Zelensky is not a carrier of the Ukrainian ethnic mentality. It is obvious. It's just a consequence of his biography. That is why he is not sensitive to topics that irritate the Ukrainian environment.. That is why he allows himself jokes that excite the Ukrainian-speaking patriotic public (which can afford to talk about “nenka” and not like that, but only Ukrainian-speaking Ukrainians have the right to criticize Ukraine).” In one of the lengthy interviews, the people’s deputy is not sure of the absolute infallibility of his new party members: “For Zelensky, the biggest threat is so that the party does not start stealing,” he said.

Declaration of Bogdan Yaremenko on property, income, expenses and financial obligations to be found in the public domain. Note that, in accordance with the requirements of paragraph 4 p. 2 hours 1 st. 3 “On the Prevention of Corruption”, the subjects of electronic declaration are candidates for people's deputies registered in the prescribed manner. In accordance, the candidate for deputies Bohdan Yaremenko “on spending the funds of the election fund”, he filled it himself in the amount of 211 thousand hryvnias and individuals in the amount of 1 million 70 thousand 555 hryvnias. In total, the size of the fund reached 1 million 281 thousand 555 hryvnias. Some individuals replenished the fund with exactly the same amounts: five for 49 thousand hryvnia, three for 47.5 thousand hryvnia, two for 45 thousand. UAH and two for 40 thousand UAH.

Yaremenko is a lover of young girls. And what else to do in the Verkhovna Rada, except to flip through profiles and get acquainted with young prostitutes? By his act, Bogdan Yaremenko greatly undermined the reputation of the “Servants of the People”, for which he was expelled from the faction.