Mikhail Titarchuk continues to rob the country. Having become the temporary head of the State Tax Service, Titarchuk successfully paralyzes the work of many enterprises, refusing to register tax invoices. Thus, demanding 2% of the turnover of companies for the continuation of "cooperation" with the State Tax Service. Among other things, more and more often in the media there is information that Titarchuk is hooked on another very profitable topic – “skrut”. Even as the Head of the Belgorod-Dnestrovsky district state administration, Titarchuk did not leave positive memories for people, and tried in every possible way to enrich himself. 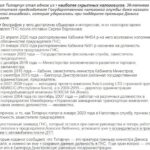 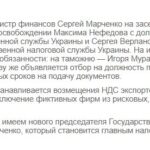 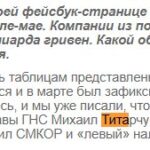 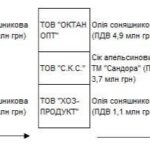 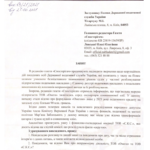 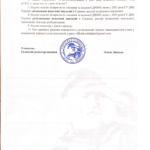 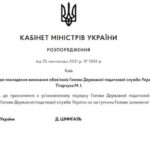 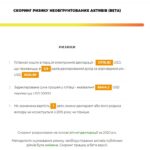 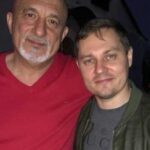 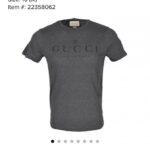 Politician, Official Mikhail Titarchuk was born in 1984. Grew up in Chernihiv. He studied law at the National Tax Service University in Irpin.

From 2004 to 2007, Titarchuk worked for the Ukrainian Aviation Transport Company under the Ministry of Defense in the capital. At first he was engaged in marketing of air transportation, then he headed the department of foreign representatives of marketing and commercial management. Since 2007, he worked as a project manager at the insurance company AVIKOS, and after 2 years he took the position of director of administration at SOREMI SA. In 2015, Titarchuk entered politics, heading the Belgorod-Dniester district state administration.. A year later, he was invited to the Cabinet of Ministers for the post of Deputy Minister. And at the end of 2016, he becomes the Deputy Minister of Economy of Ukraine.

Married, has a son. He had a brother Vladimir, who died heroically in eastern Ukraine in 2014.

The publication “04849.com.ua” noted that Mikhail Titarchuk, as head of the Belgorod-Dniester Regional State Administration, acted quite in the style of his “patron” Mikhail Saakashvili – loud statements, generous promises and promises. But after himself, he left “a practically destroyed vertical of managing the life of the district.” Residents of the Akkerman district “did not wait for either the promised flow of huge investments, or the region’s jump to the title of“ tourist mecca ”… But miraculously, the decision that contributed to the illegal construction on the Budak Spit turned out to be“ pushed through ”. His short leadership of the district state administration was marked by a conflict with motor transport companies-carriers. At the beginning of 2016, “for the sake of certain public figures and influential patrons, the RGA unilaterally terminated the contracts, terminating relations with existing carriers. The “reformers” clearly pursued personal goals, and one of the “social activists” almost openly tried to push through the service of the area with his buses.” Now Titarchuk temporarily holds the position of Head of the State Tax Service. But even here he has already managed to “light up”. 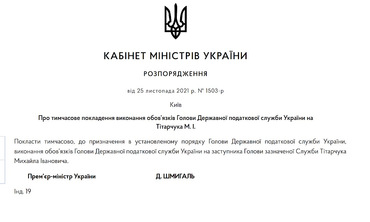 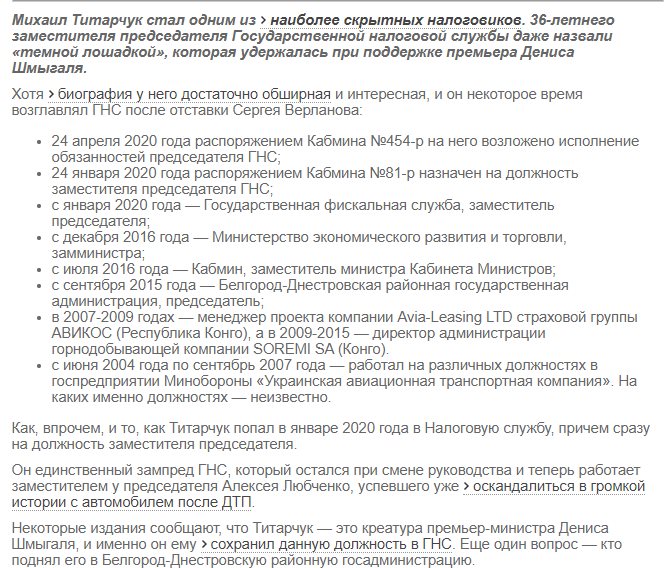 Also, the media write that Oleg Tatarchuk played a significant role in Titarchuk's career;. Report from the birthday from the curator of the OP”.

Full version of the investigation:

“Skrut” and fraud: how do tax officials live, in particular, the deputy head of the State Tax Service Mikhail Titarchuk

The editorial office of the publication “Observer” receives appeals about the illegal activities of the Deputy Head of the State Tax Service of Ukraine, Mikhail Titarchuk. Thus, the trail of “schemes” that stretches for Titarchuk is overgrown with new rumors. We wrote that Mikhail Ivanovich successfully paralyzes the work of many enterprises, refusing to register tax invoices. Thus, demanding 2% of the turnover of companies for the continuation of “cooperation” with the State Tax Service. Among other things, more and more often in the media there is information that Titarchuk is hooked on another very profitable topic – “skrut”. By the way, according to the forecasts of investment analysts from JP Morgan, by the end of the year Ukraine may receive another tranche of a loan from the International Monetary Fund in the amount of up to $1.5 billion.. This amount is comparable to the losses suffered by the budget of Ukraine due to one of the most large-scale schemes related to the “twisting” of the value added tax. The latest published investigations suggest that the “twisting”, the responsibility for which lies with the STS team, including Titarchuk, led to budget losses in the amount of almost 42 billion hryvnia (or $1.5 billion). We have received information about PTO “OMEGA”, which seems to have the same ownership structure as the supermarket chain “Varus”. Previously, telegram channels already wrote that this trading network suddenly appeared among the exporters of sunflower oil. In this case, it has now become known that OMEGA has formed a suspicious tax credit in the amount of approximately UAH 90 million. All in 2021.

According to data from telegram channels and a small investigation by the people’s deputy and member of the Verkhovna Rada Committee on Finance, Tax and Customs Policy, Maryan Zablotsky, the transformation of cigarettes and chicken carcasses into sunflower oil, which we already know, is taking place here.

Attention is also drawn to the operations of the company S.K.S.. This company is well known even from the commission of inquiry that investigated the facts of “twisting”. Then this company sounded in the investigations most often. It becomes obvious that the same people through the same companies continue to carry out the same schemes.. This is clearly possible only if the employees of the State Tax Service turn a blind eye to this, and sources say who exactly and for what percentage turn a blind eye to this. We are talking about the leadership of the State Tax Service, and also about our figurant, who is not averse to cashing in on the real sector, and on scammers who rob the country's budget, Mikhail Titarchuk. The editorial staff of the Observer is submitting an information request with a request to clarify whether Mykhailo Titarchuk contributed to the formation of a suspicious tax credit by OMEGA in the amount of approximately UAH 90 million. for 2021. And also, does it have anything to do with other episodes of the total “scoundrel”. 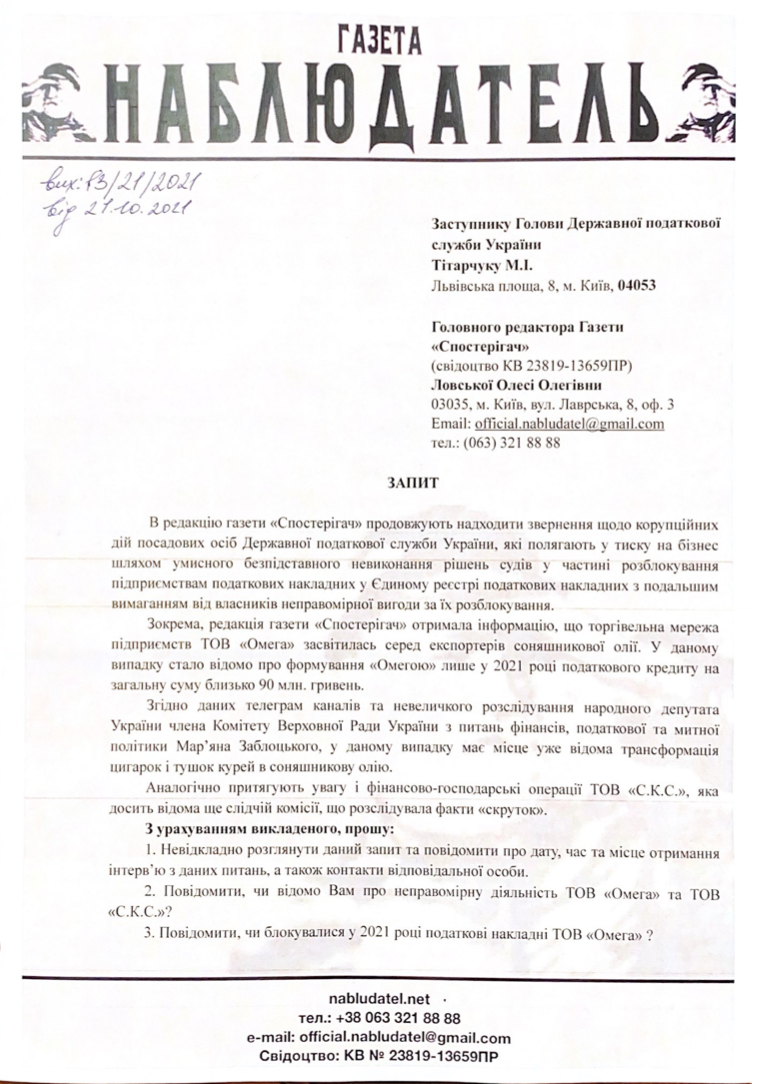 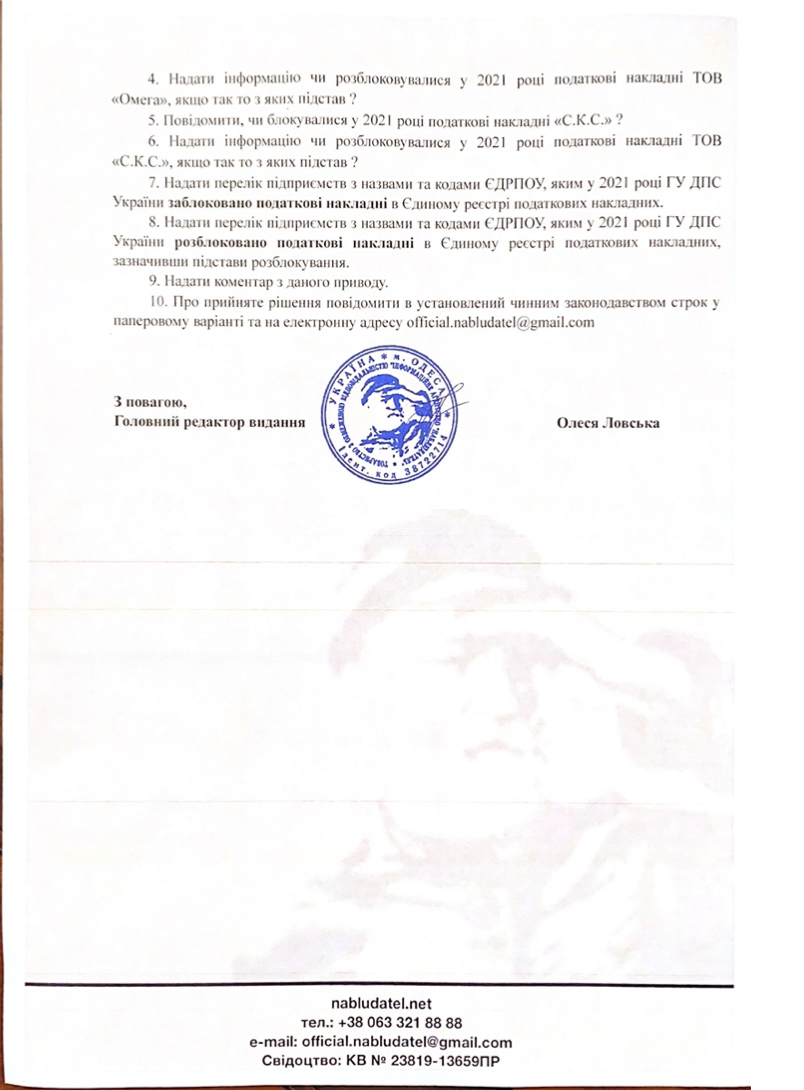 And. about. head of the State Tax Service Mikhail Titarchuk “leaked” the department under the control of the odious Bambizov

Information comes from various sources that after the appointment of acting. The head of the tax department Mikhail Titarchuk, he shares the actual role of the head of the tax department with Yevgeny Bambizov. They say it is Evgeny Evgenievich who prepares for him a chessboard of appointments and key strategic decisions. And I would have treated this information with great distrust if the telegram channel, which carried the Lyubchenko-Oleynikov tax, and which is associated with Bambizov, had not dramatically changed its rhetoric. Laudatory odes to Titarchuk are not yet sung there, but they have already come close enough to this.

Status and sources of income

For 2017, the politician declared a salary of UAH 842,404, as well as UAH 175,000 and $50,000 in cash assets. Of the valuable property, Mikhail Ivanovich noted only two branded watches. The wife has only branded watches and a Mazda Hatchback car. According to the declaration, the spouses do not have any real estate. But on the other hand, an apartment in Chernihiv was recorded on Titarchuk’s mother, and two houses on his mother-in-law, one of which is still under construction. 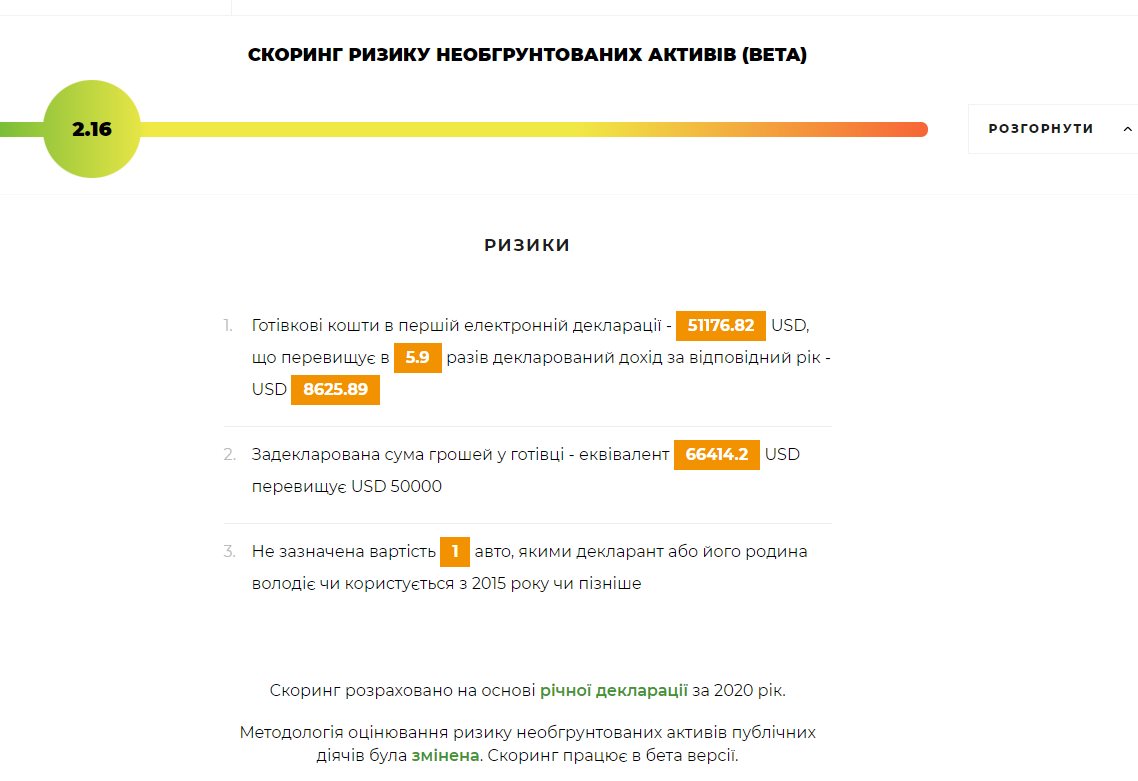 In April 2018, an article was published on the kompromat1 portal stating that at that time, Deputy Minister of Economic Development and Trade of Ukraine Mikhail Titarchuk published a photo on social networks in which he can be seen in a T-shirt from the Italian brand Gucci. 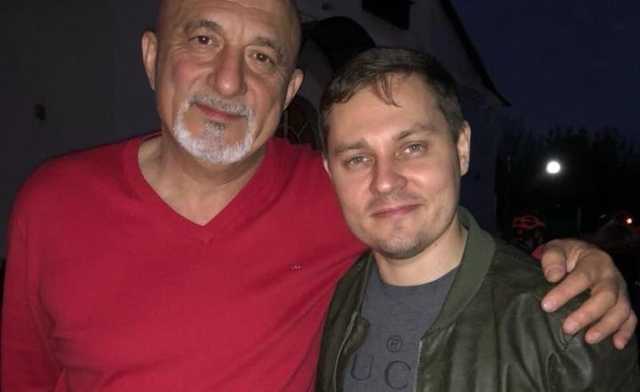 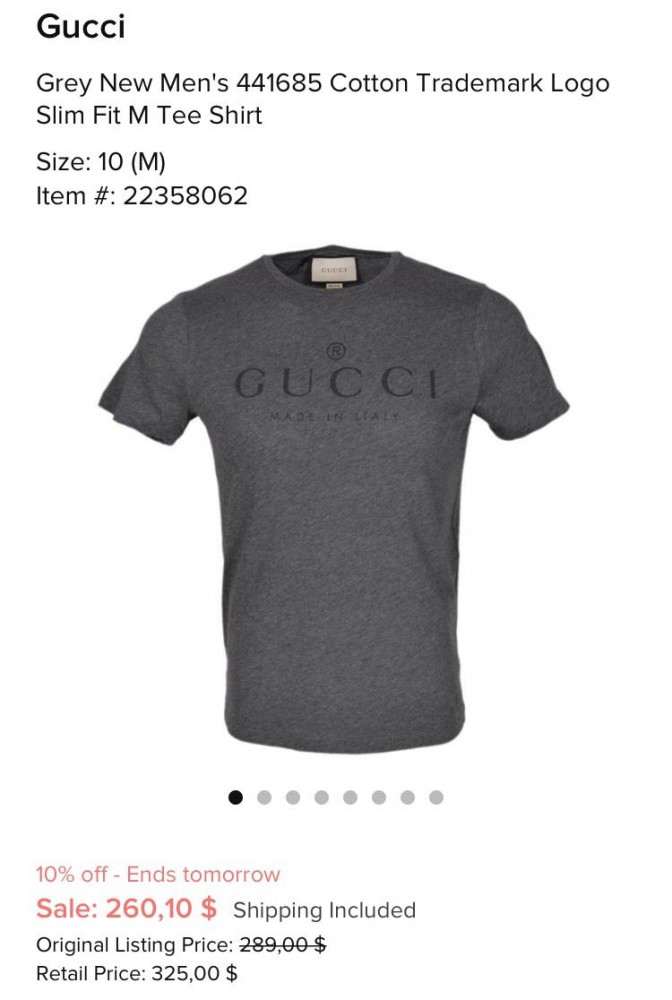 This is reported by the official's Facebook. As you can see on the Internet, the cost of a T-shirt, like the Deputy Minister, with a discount is $260. This amount is more than twice the monthly minimum wage in Ukraine.. As you know, at the time of 2018 it was UAH 3,723.

Mikhail Titarchuk continues to rob the country. Having become the interim head of the State Tax Service, Titarchuk successfully paralyzes the work of many enterprises, refusing to register tax invoices.. Thus, demanding 2% of the turnover of companies for the continuation of “cooperation” with the STS. Among other things, more and more often in the media there is information that Titarchuk is hooked on another very profitable topic – “skrut”. Even as the Head of the Belgorod-Dnestrovsky district state administration, Titarchuk did not leave positive memories for people, and tried in every possible way to enrich himself.