Daughter of the second President of Ukraine Leonid Kuchma, head of the ANTIAIDS Foundation ...

Often appears in the media, speaks in public ...

Wives of an odious oligarch, daughters of a corrupt ex-president. ...

Elena Leonidovna Pinchuk is the daughter of Leonid Kuchma, and the wife of the notorious oligarch Viktor Pinchuk. For a long time there were no complaints about Elena, so the media spoke of her very positively. But Kuchma resigned as president, and everything secret became clear. Many conclusions can be drawn from the investigations of journalists. After all, the affairs of Viktor Pinchuk in politics and business after marrying Elena went uphill. She is a link in his corruption schemes with Kuchma. Also, Elena's mansion in London, which is the most expensive house in the world, became a scandal. 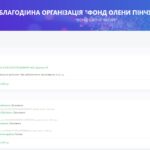 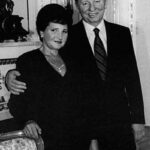 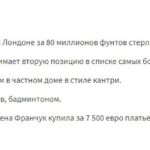 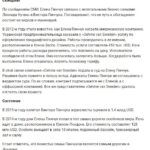 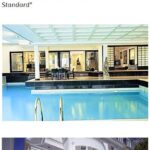 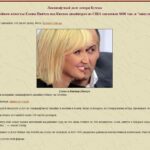 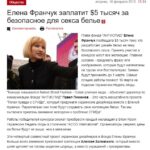 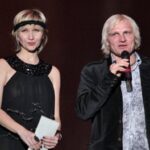 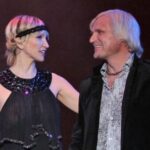 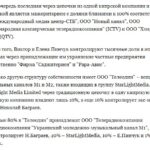 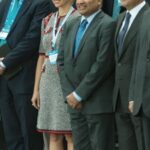 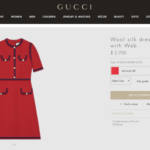 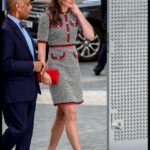 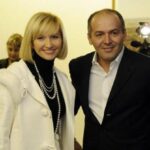 Date of birth: 03.12.1970 Place of birth. Education. Born in Dnepropetrovsk. Graduated from the Faculty of Economics of Dnepropetrovsk State University. Career. In 1995-1996. worked in the economic department of PrivatBank. In 1997-2004. – Marketing Deputy Director of Kyivstar, one of the leading Ukrainian mobile operators. Since 2003, he has been the head of the charitable organization AntiAIDS Foundation.. Today it is the first and only private AIDS foundation in Ukraine. 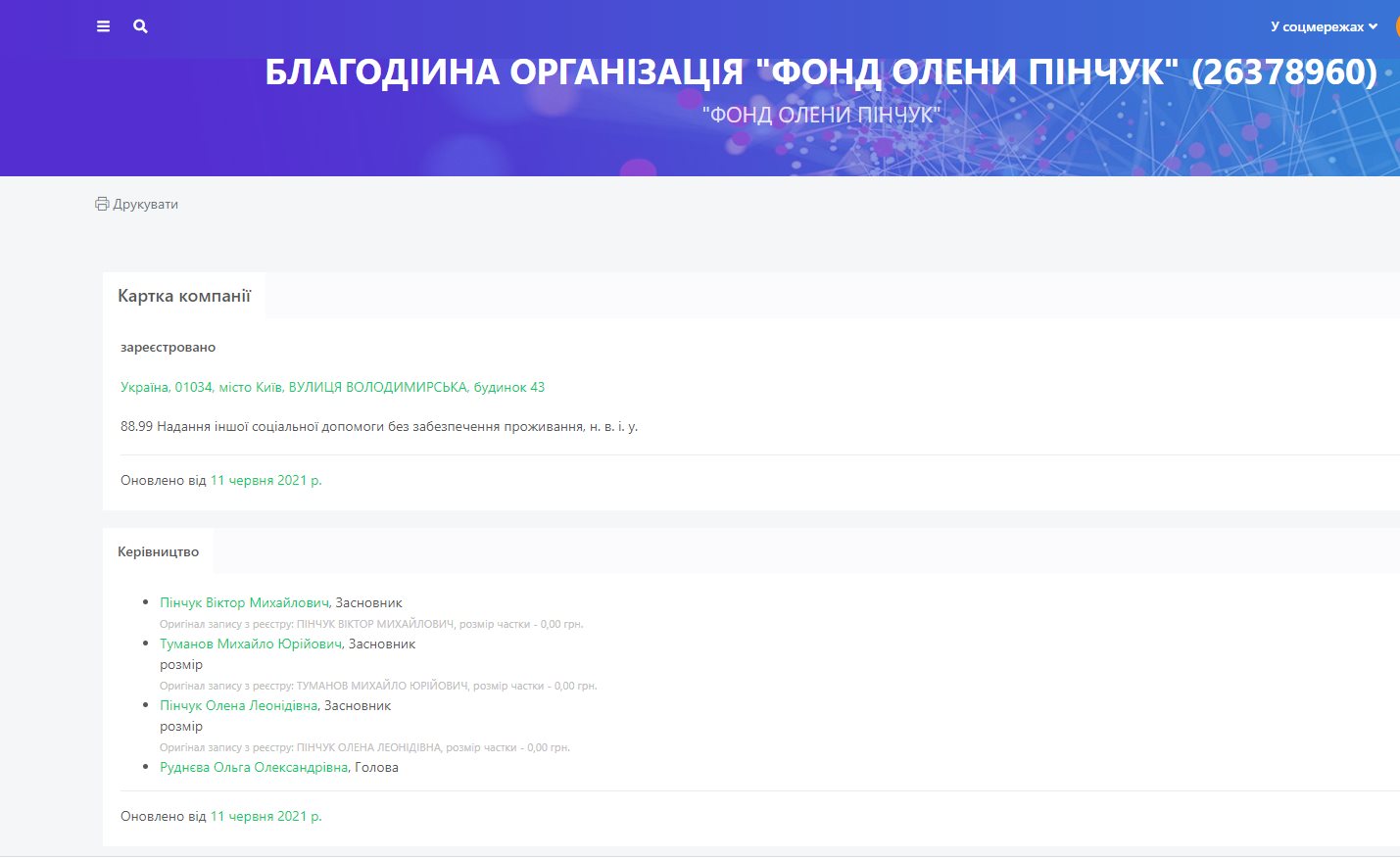 About the AntiAIDS Foundation. Among the stated goals: counteracting the HIV/AIDS epidemic in Ukraine, reducing the rate of infection spread, improving the quality of life of people diagnosed with HIV/AIDS. The Foundation helps orphanages where HIV-positive children live, conducts charitable and educational events, purchases and distributes medicines to the target audience with its funds. AntiAIDS became known to the widest public thanks to active advertising on TV and several large-scale promotions – in particular, free concerts by Elton John in Kyiv (2007) and Queen and Paul Rogers in Kharkov (2008). According to the fund, charitable contributions in the amount of UAH 1.5 million were collected from VIP guests at the first concert, and almost UAH 800,000 at the second.. hryvnia In 2010, Elena Pinchuk joined the UN commission created for the “preventive revolution” – a breakthrough in preventing new cases of HIV / AIDS in the world. Family bonds. Elena Pinchuk is the daughter of the second president of Ukraine, Leonid Kuchma. 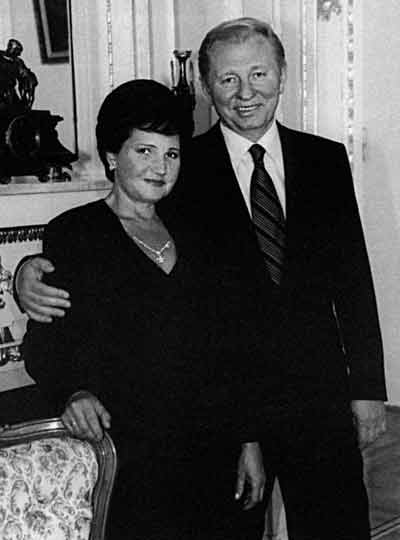 Married. Spouse – Victor Pinchuk, a well-known businessman and philanthropist, billionaire, co-owner of the Interpipe corporation, founder of the Victor Pinchuk Foundation and co-founder of the AntiAIDS Foundation. Married to Viktor Pinchuk, two daughters were born (born in 2003 and 2011). From the first marriage there is a son, Roman (born in 1991). Elena's first husband was Igor Franchuk, the ex-head of Chernomorneftegaz and the son of Anatoly Franchuk, former Chairman of the Council of Ministers of the Autonomous Republic of Crimea.

The daughter of the second president of Ukraine, Leonid Kuchma, is a fairly well-known person in her country and, at first glance, has a relatively unsullied reputation (unlike the children of the same Yushchenko or Poroshenko). However, here, rather, the merit of her father, who until a certain point managed to hide his daughter's participation in the family business. But this could not go on forever, because everything secret sooner or later becomes clear.

In 1997, after breaking off relations with Pinchuk's first husband, Elena Leonidovna, with the help of her father, met Viktor Pinchuk. After a while, the couple began to live together. A year later, he became head of the parliamentary subcommittee on business affairs, which is very suspicious for a person completely new to politics. In 2002, Elena became Victor's legal wife. From this moment on, politics is the main lever for the effective management of the family business. 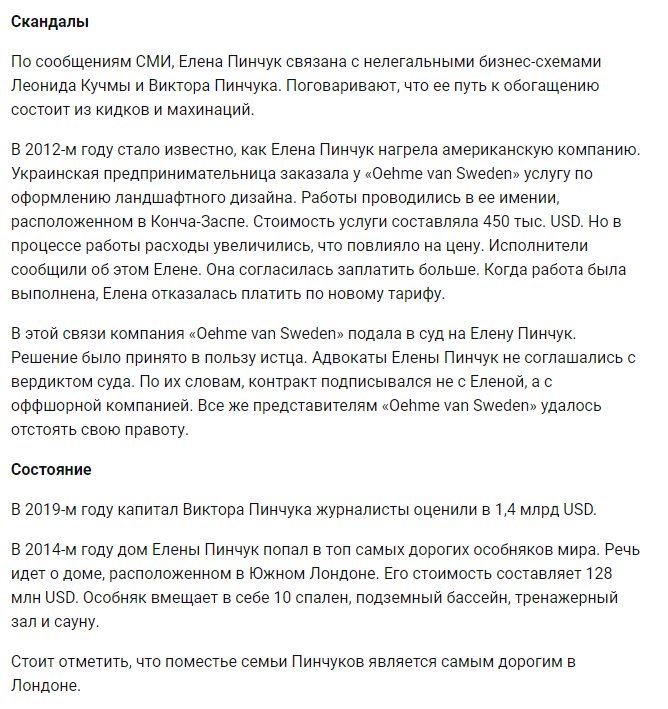 The president's son-in-law is doing well. With the help of fraud, the illegal privatization of the largest metallurgical enterprise in Ukraine, Kryvorizhstal, is being carried out. After the re-election of the president, when Viktor Yushchenko came to the post of head of state, the property was returned to the state, and Viktor Pinchuk lost about 800 million dollars.

In 2008, Elena purchased the most expensive house in the world – a five-story Victorian-style mansion with a total area of 2,000. sq.m in one of the most prestigious areas of London, worth about 159 million dollars.

Failure to pay for landscaping services

In 2012, Elena Pinchuk was caught in scams with non-payment for landscape design services at the Pinchuk estate in Koncha Zaspa. The amount of the fine, according to the decision of the American court of the District of Columbia, which Elena must pay to Oehme van Sweden, is really not that big – only about 500 thousand dollars. Naturally, by the standards of the richest family in Ukraine.

How Elena Pinchuk denied her commitments to Villa Elena

Court documents state that representatives of Oehme van Sweden were introduced to Viktor and Elena Pinchuk back in 2004.. The site, where Oehme van Sweden, under the leadership of Pinchuk and his representatives, developed landscape design, in 2004 was received by the Svіt Shlyakhіv Freight Forwarding Company LLC, the publication indicates. “The World of Shlyakhiv owes this to the government of Viktor Yanukovych. After all, it was his government that in April 2004 leased, and already in July the ownership of Svit Shlyakhiv ”114 hectares of land in the elite area near Kyiv Koncha-Zaspa. In October of the same year, the then governor of the Kyiv region Anatoly Zasukha signed an act, the right to land for a company on a land plot of 135 hectares, ”the Kyiv Post writes.

Elena Franchuk promises $5,000 for an inscription on her underwear

The Elena Franchuk ANTIAIDS Foundation announces the Naked Street Fashion graphic design competition dedicated to the topic of safe sex, the Foundation's press service reports.. The task of the competition is to develop the text and design of inscriptions/images printed on underwear calling for safe sex. 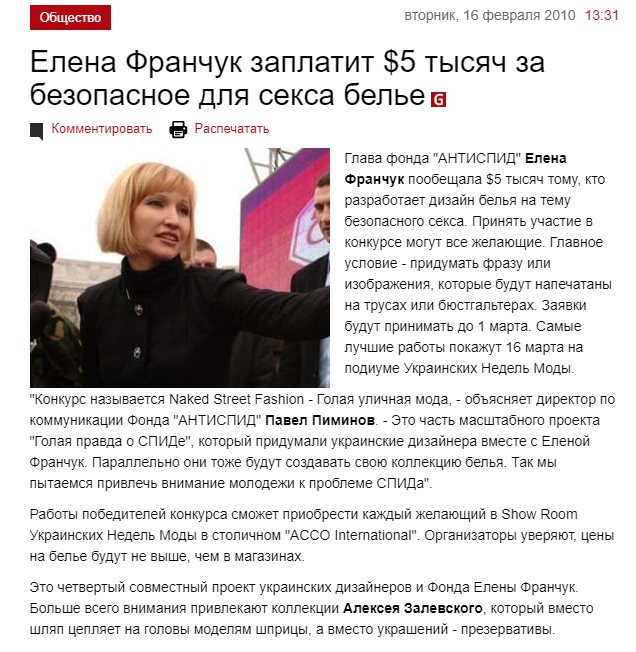 “Our goal is to fill the everyday life of Ukrainian youth with the theme “good sex is safe sex,” the organizers of the contest say and promise the winner a prize of $5,000. The contest should become part of the Naked Truth about AIDS project, which will be presented on March 16, 2010 on the runway of the Ukrainian Fashion Week, Ostrov reports.

The daughter of the ex-president of Ukraine Leonid Kuchma, Elena Franchuk, bared her breasts

Elena Franchuk impressed the guests with her bare breasts. The head of the AntiAIDS Foundation and the daughter of the ex-president of Ukraine Leonid Kuchma, Elena Franchuk, bared her breasts at the Best Fashion Awards ceremony. 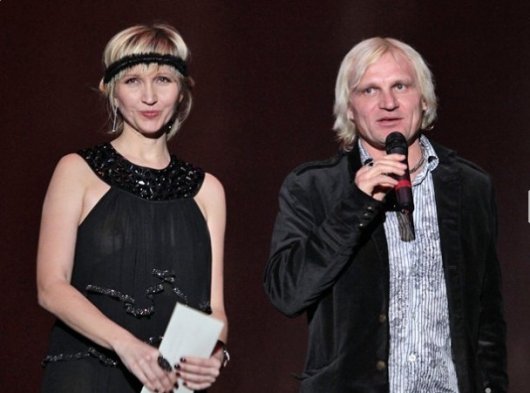 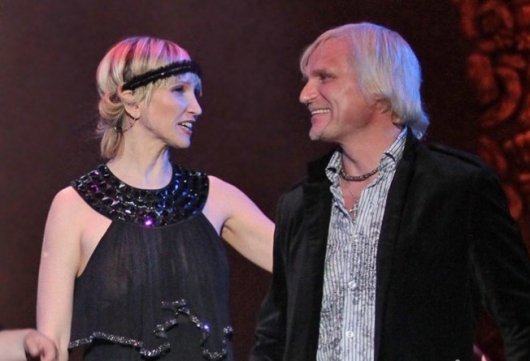 The wife of the oligarch Viktor Pinchuk did not hesitate to go out without a bra that could somehow cover her breasts. Elena's transparent dress spoke for itself. Many guests of the ceremony looked askance towards the bare chest of Kuchma's daughter. In such a dress, she visited the Victoria and Albert Museum. 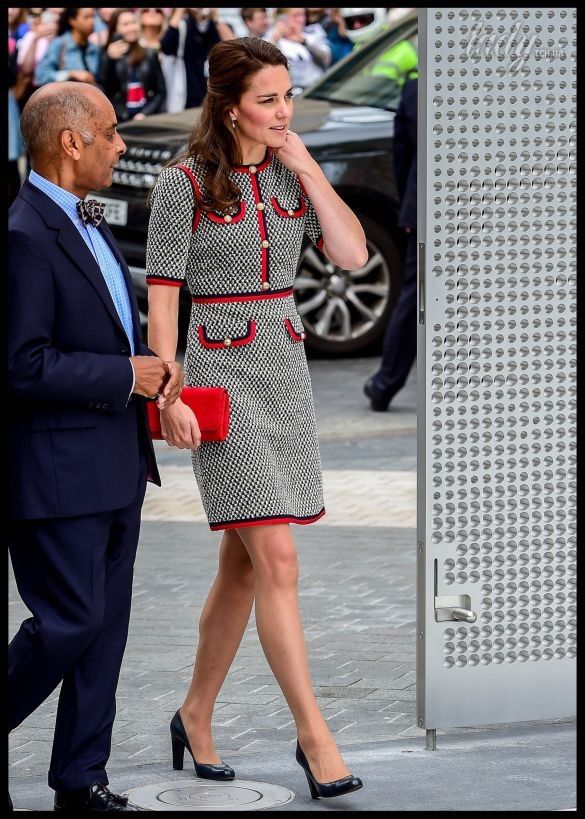 In November 2007, she took 17th place in the TOP-100 most influential women in Ukraine, compiled by Focus magazine.. According to the compilers, influence is due to “social activities, marital status, ownership of part of the shares of Victor Pinchuk's media holding (Facts and Comments, Novy Kanal, ICTV, STB, M1, several radio stations)”. Since November 2009, Elena Pinchuk has been the head of the Supervisory Board of the StarLightMedia television group, which unites ICTV, Novy, STB and M1 channels.

The 90s were decisive in the career of Viktor Pinchuk. He met the daughter of future President Leonid Kuchma. And although they officially legalized relations only in 2002, Pinchuk felt the benefits much earlier. In 1996, Pinchuk's companies Interpipe and Boston Trading Conn entered the Belarusian market and took part in the privatization of the Mogilev Metallurgical Plant.. They say that Kuchma helped him a lot here, because Lukashenka was against Pinchuk opening something in Belarus. 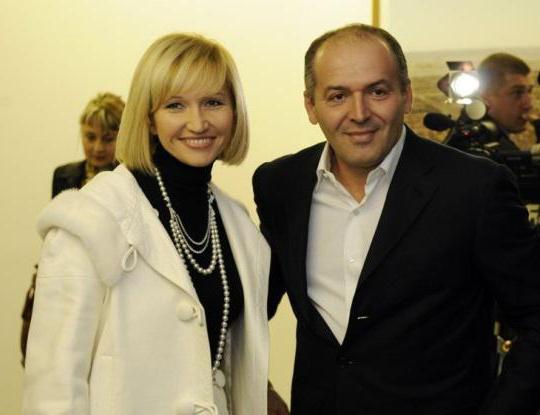 In addition, thanks to the support of his father-in-law, Pinchuk privatized several oblenergos: Dneprooblenergo, Zaporizhzhyaoblenergo, Mykolaevoblenergo, Ternopoloblenergo and Luganskoblenergo. Business brought huge profits to Pinchuk and in 1998 he decided to invest in politics. In the parliamentary elections, Viktor Pinchuk entered the Verkhovna Rada on the lists of the People's Democratic Party. In addition, under Kuchma, he receives the post of adviser to President Leonid Kuchma and was a member of the Council of Entrepreneurs under the Cabinet of Ministers. Leaves party in 2002. And until 2004 he did almost nothing as a politician.

Elena Pinchuk is a very influential woman, some media describe her as a woman who changed the world. Whether she managed to change the world for the better is not clear, but to improve the financial benefits of her husband and open up new political opportunities – yes.