Appears on TV channels and other media ...

accusations of pro-Russian politics, a lawyer for the Kvartal 95 and Servant of the People ...

Alexander Anatolyevich Kachura is an experienced lawyer and deputy. But there are many suspicions and versions around his name. His law office "Kachura Lawers" dealt with many celebrities. And he collaborated with Oleg Vinnik, and with the Kvartal 95 studio, and is also a lawyer for the Servant of the People party. But in addition to the good, it is worth noting that Kachura Lawers was engaged in the registration of fictitious organizations, and according to some versions, the Party of Resolute Changes was bought from Kachura and renamed the Servant of the People. Therefore, the headquarters of the "Servant of the People" is listed at the same address as the law office "Kachura Lawers". 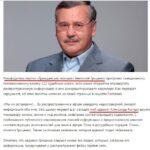 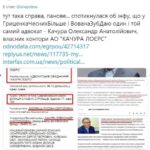 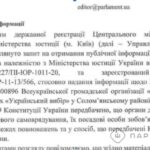 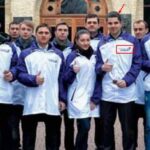 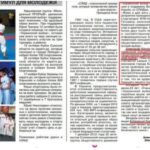 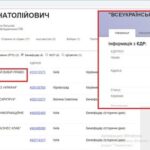 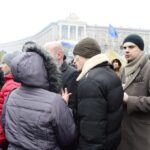 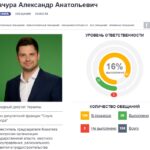 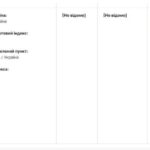 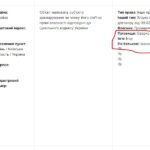 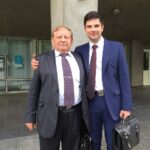 Deputy of the 9th convocation of the Verkhovna Rada of Ukraine, lawyer and member of the political party “Servant of the People”. Born in Konotop, Sumy region on August 18, 1990. Alexander Kachura has three higher educations: Secondary education – secondary school No. 12. Konotop with in-depth study of jurisprudence. In 2012 he graduated from the International University of Finance with a degree in International Management Management. In 2013, he received a diploma with honors in the specialty “Jurisprudence” from NTU KPI (“Kyiv Polytechnic”). In 2015 he graduated from KNU named after. Shevchenko majoring in Political Science. Started practicing as a lawyer in 2012, a year before receiving a law degree. Initially, he carried out private legal practice, and since 2017 he has been the founder and owner of the law agency “Kachura Lawyers”. In 2018, he received the status of “The Best Lawyer of Ukraine” according to the Bar Association. Lawyer activity Kachura brought him great popularity. Today Alexander Kachura is a lawyer for the Servant of the People party, the creative association Studio Kvartal 95. On his account, the protection of the interests of many Ukrainian celebrities. He represented the interests of Oleg Vinnik, Michel Tereshchenko, ex-Minister of Defense Anatoly Gritsenko. 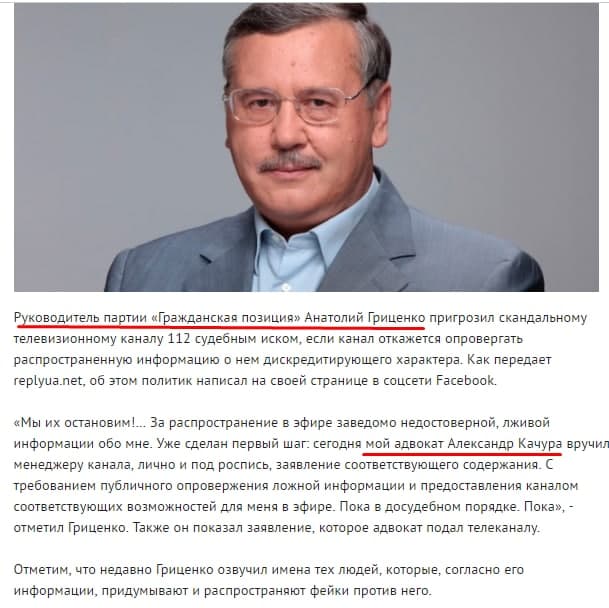 It is worth noting that now Kachura's right to engage in advocacy has been suspended on the basis of his application. The political career of Alexander Kachura is directly related to his business relationship with the leadership of “Studio Kvartal 95”. As a lawyer for a creative association, in 2019 he became a lawyer for the Servant of the People party. 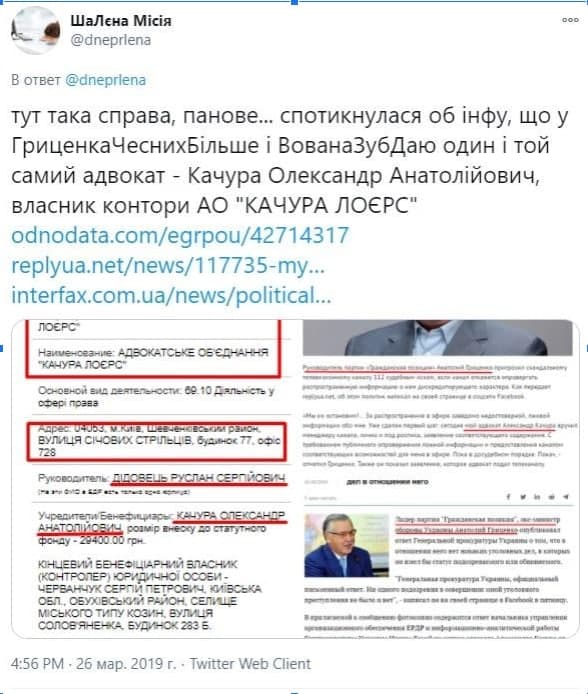 In 2019, he took part in a cross-continental swim from Asia to Europe through the Bosphorus. Having overcome 6500 meters, he received the status of a transcontinental swimmer.

According to Tatyana Chornovol, back in 2013-2014, Kachura was the head of the Ukrainian Choice party, which was influenced by the pro-Russian politician Viktor Medvedchuk, who has friendly relations with Vladimir Putin. Also, Chernovol claimed that before the founding of the Servant of the People party, Kachura was associated with the party of Anatoly Shariy, to which he provided legal services. 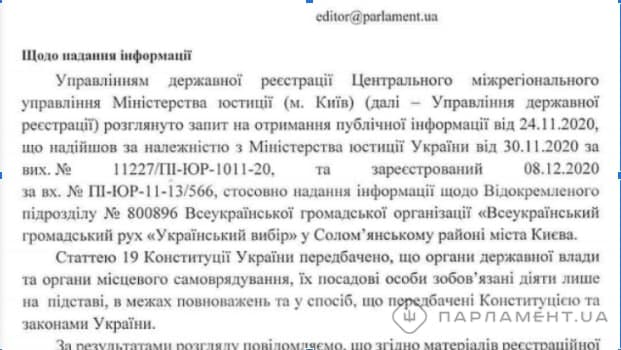 Kachura himself is trying to distance himself from this information in a number of ways: at first, he explained to the Ukrainian media that his name appeared in the registers without his knowledge. Later, he simply claimed that he had nothing to do with it. At the same time, Kachura appealed to Parliament.UA regarding the refutation of this information.

However, at the request of Parliament.UA, the Ministry of Justice informed about Kachura’s participation in Medvedchuk’s project: he was listed as the head of a separate division of the public organization All-Ukrainian Movement “Ukrainian Choice” in the Solomensky district of Kyiv. This division, according to the Ministry of Justice, was registered on November 7, 2013. 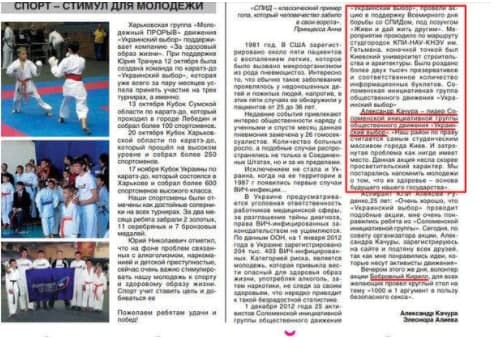 It is also reported that on May 28, 2020, a message was entered into the Unified State Register of Legal Entities, Individual Entrepreneurs and Public Formations about the termination of the unit's activities.

Alexander Kachura earned his name and quite a lot of fame thanks to his advocacy. His law firm “Kachura Lawyers” is popular and in demand among well-known Ukrainians and organizations.. So at different times, this company represented the interests of the musical artist Oleg Vinnik, the RS music group, the Kvartal 95 studio, businessman and Glukhov mayor Michel Tereshchenko, ex-Minister of Defense Anatoly Gritsenko and many others. His law firm and Alexander Kachura himself received special attention in 2019, when Kachura's firm won the case to ban the series “Matchmakers”. The law office acted in the interests of the Kvartal 95 studio. Then the administrative Kyiv court lifted the ban on showing the series “Matchmakers” in Ukraine and the actor Fyodor Dobronravov was again allowed to enter the territory of Ukraine. When Alexander Kachura collaborated with artist Oleg Vinnik, he worked to protect the artist's business popularity. European firms turned to Kachura's professional help, which, as far as their activities, work in Ukraine. Colleagues in the legal profession speak of Alexander Anatolyevich as a principled specialist who rejects any manifestations of corruption and corruption schemes in his work. The registration address of the Servant of the People party is the same as the address of the law office owned by Oleksandr Kachura. According to the financial reports that are freely available, it is known that the Servant of the People party uses 30 square meters in the office of the law office free of charge. 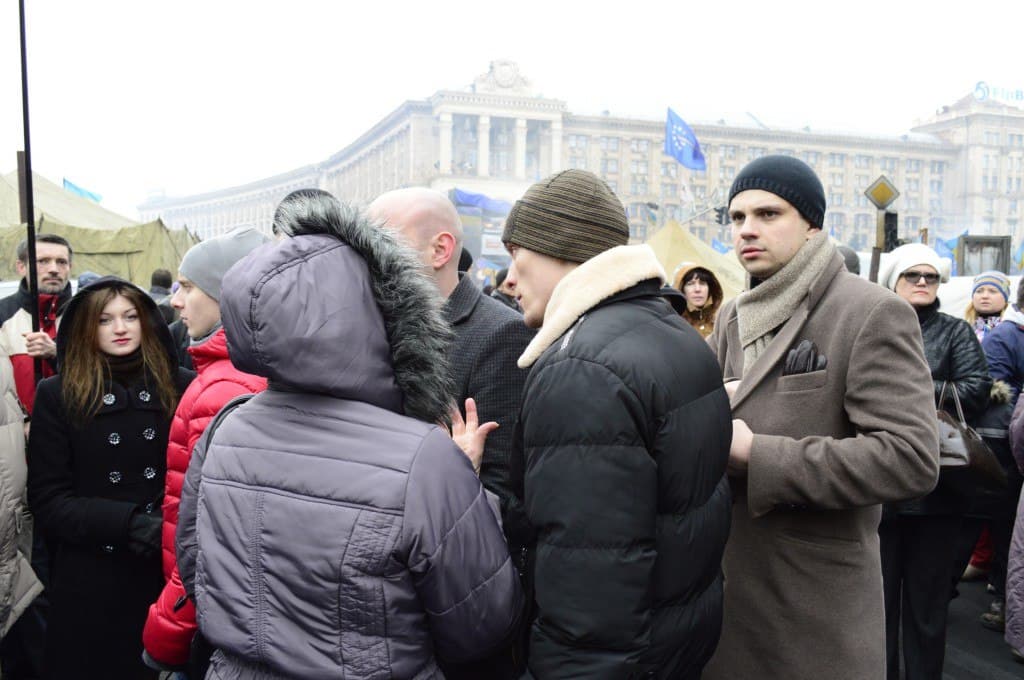 As of August 7, 2019, the tax payer “KACHURA LOYERS” has no tax debt, but open sources report that from the next day – August 8, 2019, the status of a legal entity is under suspension.

As the managing partner of Ukryurtsentr, Oleksandr Kachur and other lawyers of the law firm were suspected by the journalists that they were engaged in the registration of organizations that had signs of fictitious ones. In response to such a suspicion, Oleksandr Kachura, partner of UkrYurCentre, noted that sometimes journalists, in search of hot news and in order to get additional visits to their sites, allow themselves to post unfounded news and make too hasty conclusions, which are far from always true.. Journalists of certain resources made the main lawyers of Azarov, Yanukovych and a number of his assistants from Kachura's company, which, according to Kachura, is a complete absurdity. As a result, the company UkrYurCentre filed a lawsuit against the OstroV publication on which the aforementioned implausible information was posted. Oleksandr Kachura is the founder of the educational programs “School of Assistant to the People's Deputy” and “School of Real Jurisprudence”. He also conducted a week-long training for newly elected deputies in the parliamentary elections. Since, according to Kachura, they do not have time to build up. Ukrainians gave great confidence to the political force of the Servant of the People, as 254 people passed from their party to the Verkhovna Rada. According to people's deputy Kachura, they have no time to hesitate and need to make decisions from the first minute. For example, Alexander Anatolyevich cited as an example all the past convocations of deputies, when they began to sort things out directly at the workplace, and this took not only days and weeks, sometimes even months, from which the people suffered. Some open sources, not fully understanding what Alexander Kachura does and how he actually looks, could confuse him with Alexander Kachur, whose surname differs only by one letter. That other Alexander at one time in 2010 was the youngest mayor, in that year he became the mayor of the city of Nemirov. On his page on social networks, Kachura gives brief consultations and explanations in accordance with his advocacy, in particular, talks about the importance of the role of a lawyer during the interrogation. Advise people on how to behave if they do not yet have their own lawyer. A colleague in the lawyer's path Alexei Shevchuk claimed that the Servant of the People party does not exist. In his opinion, there is a party “bought on the knees of Mr. Kachura”. According to Shevchuk, there was a “Party of Resolute Changes”, which, in his opinion, was sold and renamed the Servant of the People party. 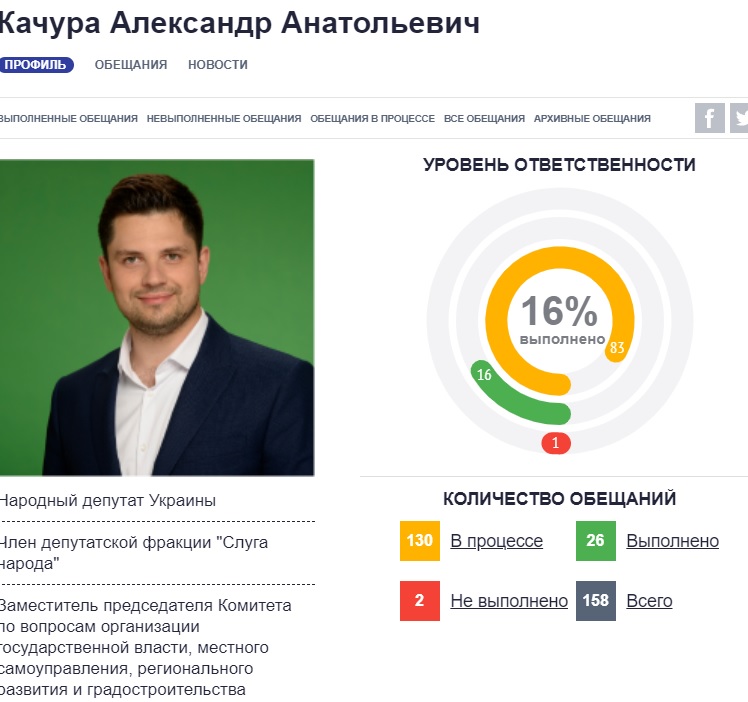 The declaration indicates 4 real estate objects, these are apartments that are registered to the wife Ekaterina Aleksandrovna, and to the mother Tamara Alekseevna. And the last object is generally like a “ghost”, it is not indicated who is registered, what area and price. We can only know that he is. 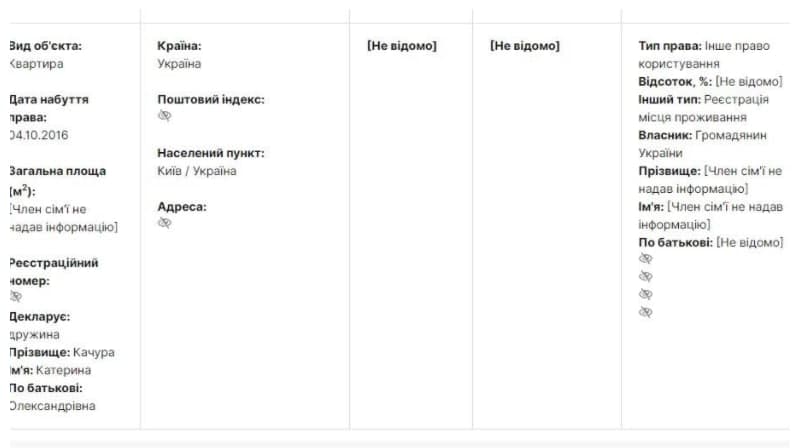 And also, 3 objects of unfinished construction were registered. Two are registered to Ekaterina Alexandrovna, and one to Alexander Anatolyevich. One of the unfinished objects is located in Irpin and belongs to Igor Ivanovich Overko. In 2019, the court seized the plots in Irpin, where the Synergy City Residential Complex Overko is being built. 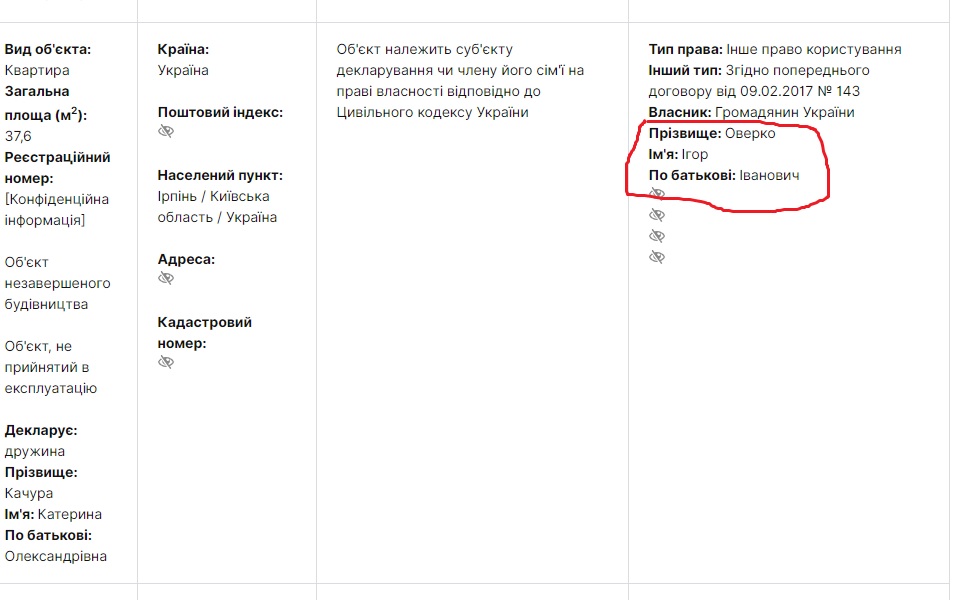 Proceedings are open under the article abuse of power or official position, according to the city council of Irpin. According to the investigation, 5 out of 6 sites where construction is underway belong to the floodplain reclaimed lands of the nationwide drainage and moisturizing system of the Irpen River and are part of the protective canal right-of-way. So buying an apartment is illegal. It is worth noting that Kachura had corporate rights to TOV “KL PODATKI TA AUDIT”, the law office “KACHURA LOYERS” and the law firm of the same name. In general, considering his declaration and realizing how influential he is, his income does not seem suspicious. But, also, in his declaration the amount that he transferred to the account of a political party is indicated, it is worth assuming the Servant of the People party. Suspicious investment with an impressive amount. This is despite the fact that in the same year he bought a car for 849 thousand. UAH. And apparently, this is only a penny part of his income. Well, a good lawyer gets “good”. And yet, the conclusion suggests itself that Kachura came into politics not for the benefit of society, but in order to “adjust” some laws to himself, thereby creating a new business and new offices. For the sake of this, he made such good friends with the 95 quarter studio, and later joined the president's party. 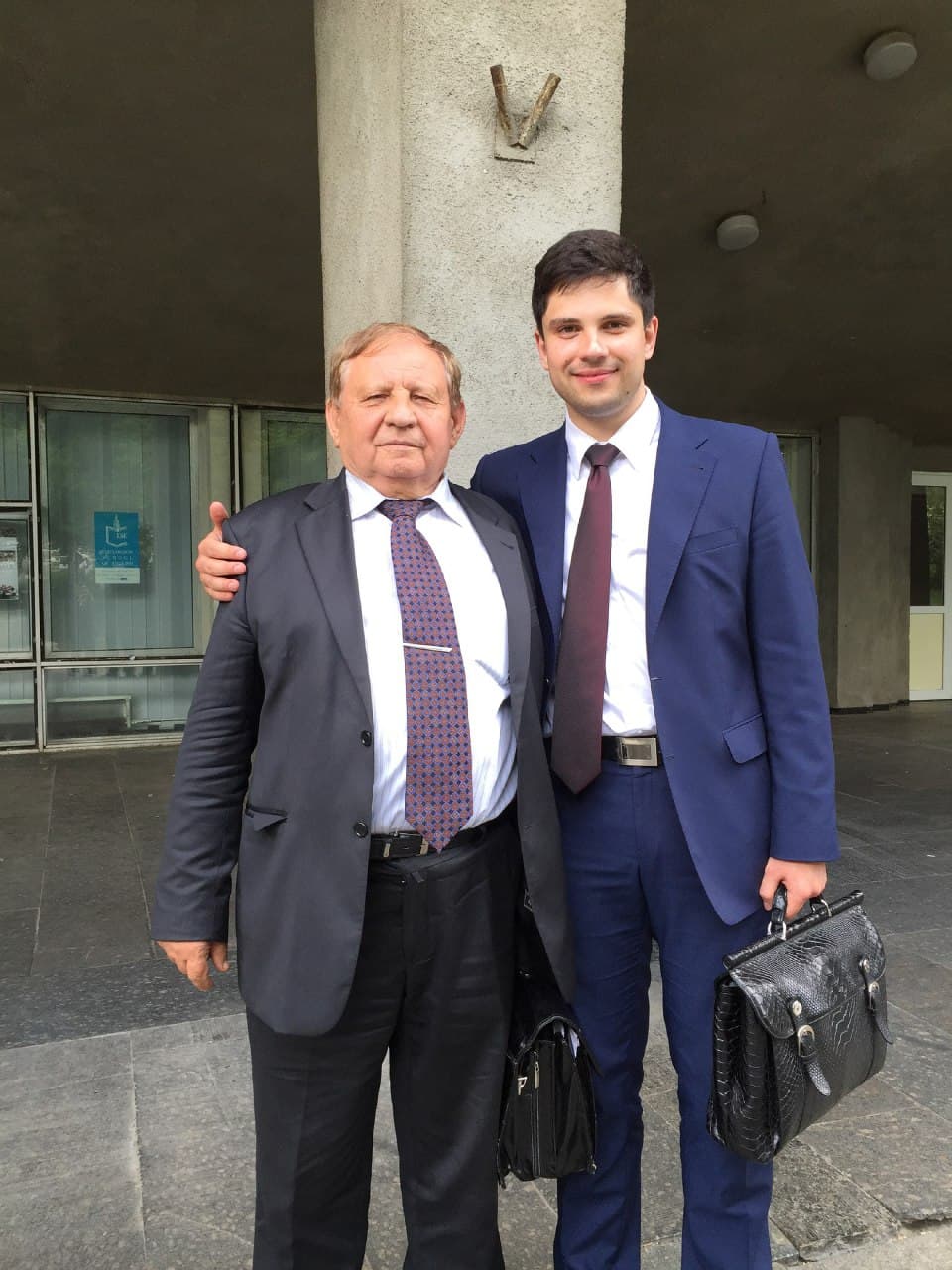 In 2021, he decided to become a blogger as well, in order to convey “his truth” to people, and has already purchased the necessary equipment. He said he bought the whole thing for less than a thousand dollars.

Alexander Anatolyevich Kachura is an educated and literate person. But about people like him, there is a proverb: “We will dance for both yours and ours, and for a penny”, for the sake of a good reward, he is ready to work for anyone, and he came into politics, most likely, for the sake of his further advancement in business. Therefore, there are many promises, but the results are like a cat crying.