Member of the Kyiv Regional Council from the Servant of the People faction, member of the ...

Rarely appears in the media and political shows ...

"Nepotism" in politics flourishes. Natalia Gunko – the wife of the people's deputy Anatoly Gunko, got into the Kyiv regional administration for a reason. In the past, she was involved in a land scandal, just like her husband Anatoly Gunko. In addition, Natalya Ivanovna is clearly not worried about which political party she will join, the main thing is to be in power, increase her income, and expensive branded jewelry. Finally, we can add that the journalists discovered the facts of transferring money from the country of the aggressor to Ukrainian politicians, including Natalia Gunko. According to the investigation, this money was directed to the activities necessary for Russia to conduct a hybrid war. 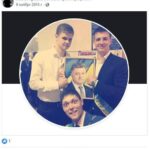 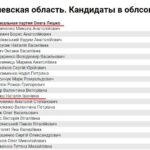 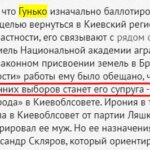 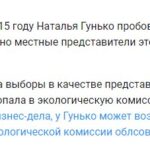 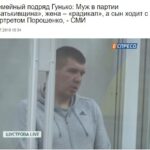 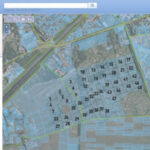 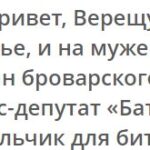 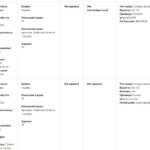 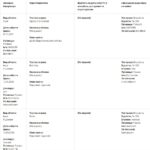 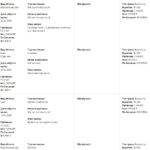 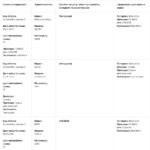 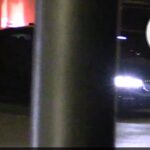 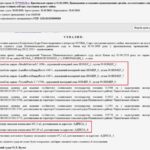 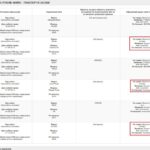 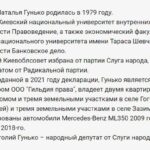 Natalya Gunko is married. The chosen one is Anatoly (born in 1976). He is also a lawyer and is the director of Guild of Rights LLC.. Anatoly has a stake in Inter-Profit (46%, organization of building construction and Fintechinvest (10%, wholesale trade in building materials). Engaged in entrepreneurial activities. In 2015, he unsuccessfully ran for the Kyiv Regional Council from the Our Land party, and in 2019 for the Verkhovna Rada from the Batkivshchyna VO. The Gunko spouses have two children: daughter Ekaterina and son Konstantin. 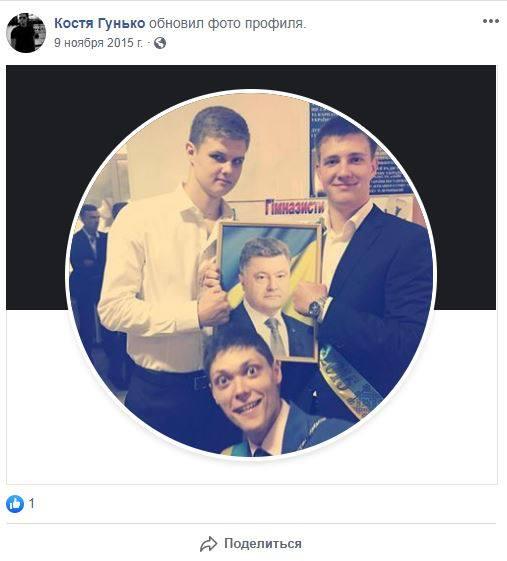 In 2012, Natalia Gunko received a law degree from the National Academy of Internal Affairs of Ukraine. 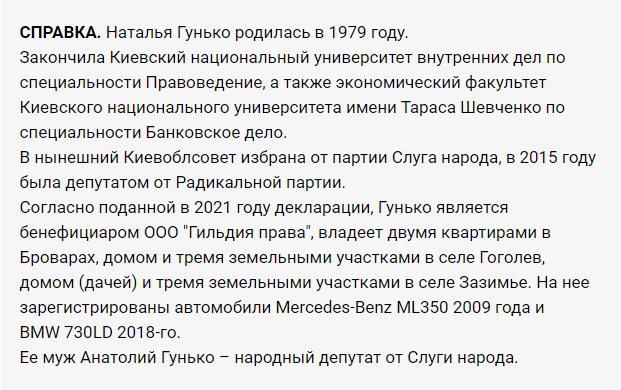 Natalia Gunko worked for two years (2003-2005) as a secretary in the capital's Shevchenko district court. Since 2008, she has been working as a legal adviser at Guildiya Prava LLC. According to the declaration, Natalia is the owner of this company. In addition, Gunko owns the Granit Trade company (production of bricks, tiles and other building products from baked clay) and half of the rights to the Expert Cruise transport company (retail trade in motor vehicle parts). In 2015, from the Radical Party, Natalya won the elections in the fifteenth constituency (Kalinovka, Pukhovka, Dmitrov, Trebukhov, Knyazhichi and other adjacent villages) and ended up in the Kyiv Regional Council. 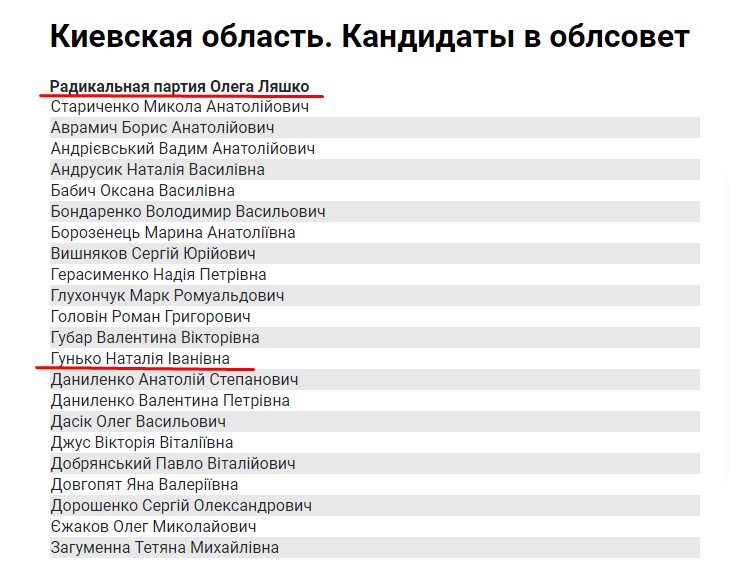 Gunko in the regional council holds the position of secretary of the commission on ecology, water resources, nature management, liquidation of the consequences of the Chernobyl accident and other emergencies.

In the local elections of 2020, she ran under No. 3 on the list of the Servant of the People party after the then leader of the regional cell of the SN, deputy of the Verkhovna Rada of the IX convocation Alexander Dubinsky (until February 2, 2021, a member of the faction of the Servant of the People party, then non-factional; constituency №94 in Kyiv region. – Obukhov and Vasilkov) and after Alexander Sklyarov, later elected chairman of the VIII convocation.

In the 4th territorial constituency of the Brovarsky district, she ran under No. 2. Passed through a single single-mandate constituency. From November 20, 2020 – Deputy of the Kyiv Regional Council of the VIII convocation. Member of the Servant of the People faction of 22 deputies, headed by authorized representative Denis Sicheva. On November 25, 2020, together with Galina Yerko (“European Solidarity”) and Irina Shvets (“OPLE”), she joined the Secretariat of the session of the Regional Council of the VIII convocation. On November 30, 2020, she became a member of the Permanent Commission on Capital Construction, Architecture, Transport, Communications, Fuel and Energy Supply and the Development of Infrastructure Facilities. On April 27, 2021, the deputies of the Kyiv Regional Council at an extraordinary meeting accepted the resignation of the chairman of the council Oleksandr Sklyarov, as well as his first deputy Marina Sapozhko and deputy Valeriy Ksendzenko. 59 deputies out of 60 present voted for this decision (one ballot was spoiled). At the same meeting, Natalia Gunko was elected chairman of the Kyiv Regional Council with 58 votes, as predicted by KV, and Yaroslav Dobryansky (For the Future) was elected as her first deputy.. Tatyana Semyonova (“European Solidarity”) was elected Vice-Chairman. 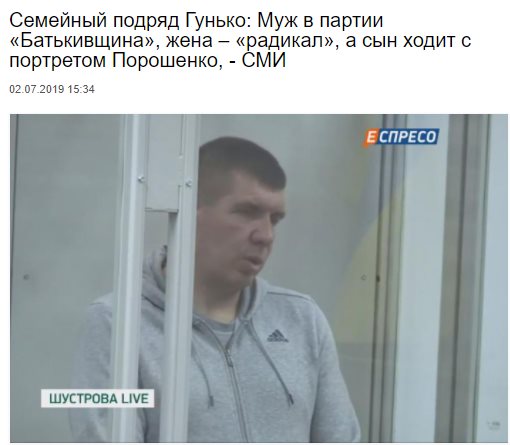 Husband of Natalia Gunko, according to media reports, is involved in the “scandalous deriban” on the territory of Brovary. So, at the end of 2013, the local authorities tore apart the lands that once belonged to the state enterprise “Radio Transmitting Center”. First, these lands (96 hectares) were leased to 48 persons for “managing a personal peasant economy”. But after a few days, all the owners simultaneously resold “them to three persons, among whom was Anatoly Gunko. According to journalistic investigations, he owns plots with an area of 44 hectares.” 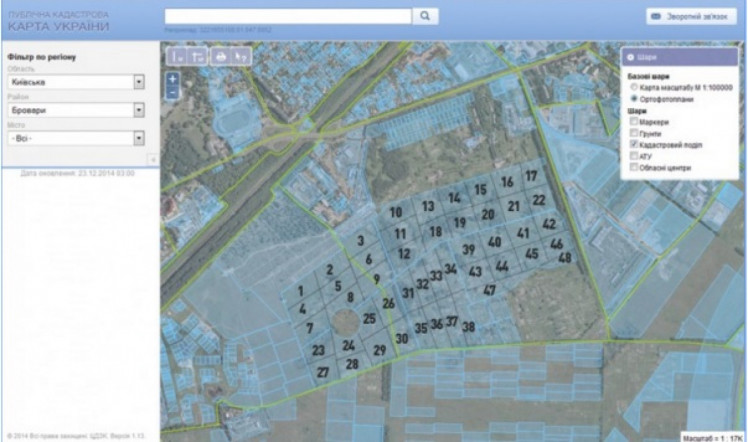 Further, “at the session, the community was informed that it is planned to build a plant on this site by the forces of a German pharmaceutical company. However, the Germans “at the request of the media and activists subsequently refuted this version”. In general, the cost of these lands, according to journalists’ calculations, is equated to the “annual budget of the city.” At the session of the Kyiv Regional Council, the project, according to which the pharmaceutical plant was allegedly supposed to be built, was presented by employees of the company “Techenergotrade”. Its owner is a well-known businessman Vladimir Polishchuk, who is married to the niece of Russian Prime Minister Dmitry Medvedev. The Polischuks business includes the Eldorado network, Technopolis, the Gulliver shopping and entertainment center, and Mikhailovsky Bank. Other sources link Inter-Profit, co-founded by Anatoly Gunko, to this scheme.. The scandal is called the “land scam of the year.” According to media reports, Natalia’s husband was a suspect “in criminal proceedings on the fact of the destruction of the state “Radio Transmitting Center” in Brovary and the appropriation of land”. The prosecution demanded “for Gunko a measure of restraint in the form of detention, arguing that he had “corrupt ties with law enforcement agencies.” Prosecutor General of Ukraine Yuriy Lutsenko assured that the defendants in the said criminal proceedings caused damage to the country's defense during the Russian aggression”, since on the territory of the State Enterprise “Radio Transmitting Center” he and other suspects “illegally destroyed the operating equipment”, with the help of which 95% of the radio signal was covered territory of Ukraine, including the occupied territories. However, in 2019, due to lack of evidence, Anatoly Gunko was cleared of suspicion.

Despite the restrictions, “servants of the people” gathered at the hotel and restaurant complex during the lockdown

During the enhanced quarantine, people's deputies from the Servant of the People party Andriy Motovilovets, Anatoly Gunko, Artem Kultenko and their fellow party deputies from the Kyiv Regional Council held a meeting for many hours in the out-of-town hotel and restaurant complex Koncha Zaspa Park. The co-owner of the restaurant in this institution is the deputy of the Kyiv Regional Council from “SN” Sergey Levchenko, who was also present at the meeting. This happened during the government-imposed bans on mass gatherings, the ban on the operation of conference rooms in hotels and the servicing of third-party visitors.. This is stated in the investigation of the Schemes program (a project of Radio Liberty and UA: First). Some participants of the meeting explained the meetings in the complex by the “paralyzed work of the regional council” and the inability to find “another coworking space”. “Schemes” also noticed a BMW there, the numbers of which are registered to the deputy from the “Servant of the People” from the Kyiv Regional Council Natalya Gunko. 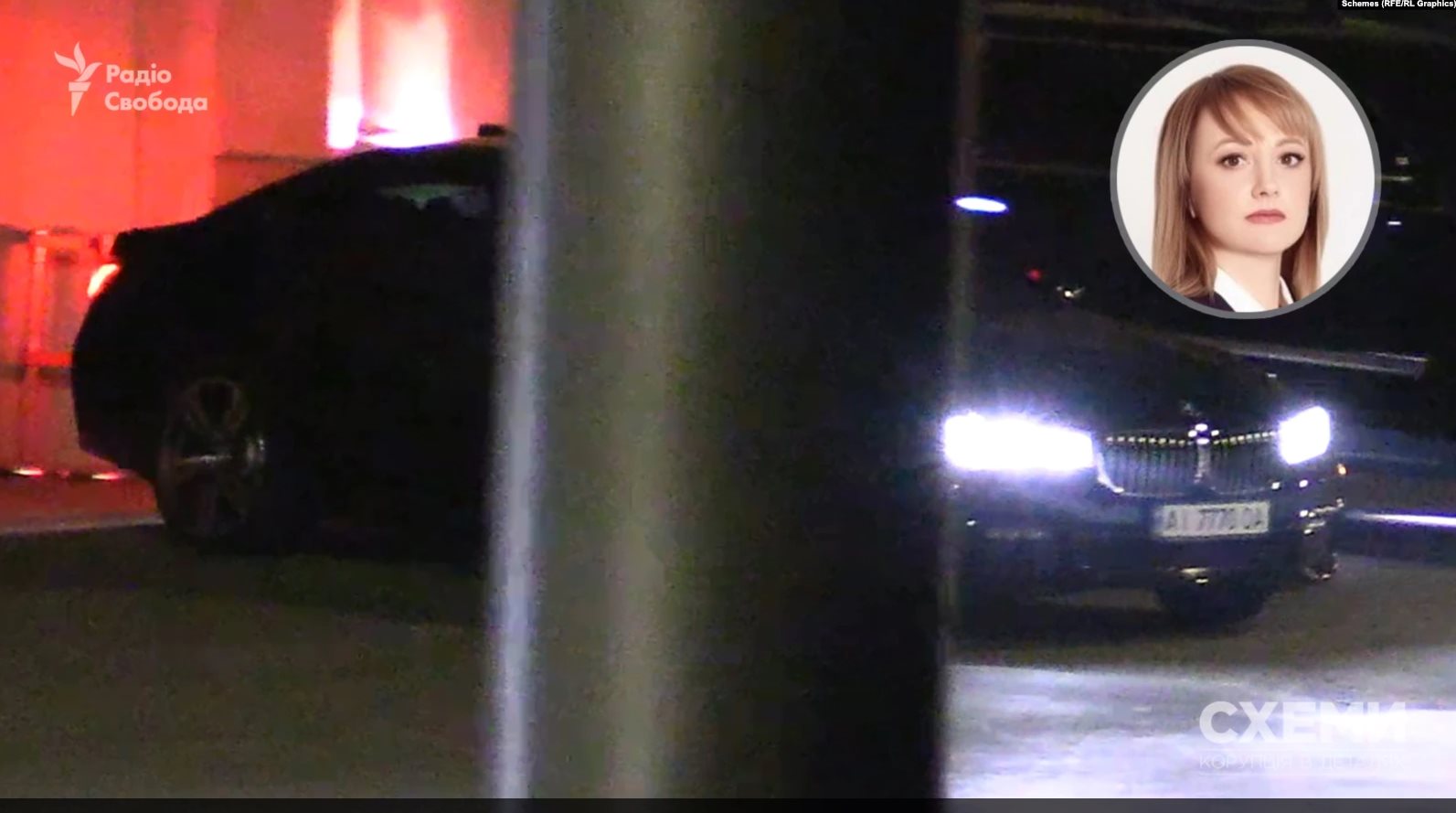 The security forces of the Kyiv region have launched a pre-trial investigation into the criminal laundering of money regularly received from Russia over the past 1.5 years. In the materials of the criminal proceedings, we are talking about the fact that funds were regularly transferred from the aggressor country, which subsequently settled on the accounts of Ukrainian civil organizations, committees and even representatives of political parties. According to the investigation, this money was directed to the activities necessary for Russia to conduct a hybrid war. It is noteworthy, but not surprising, that these funds went from Russia to the accounts of companies affiliated with Viktor Medvedchuk, who is also the godfather of Russian President Vladimir Putin. In the future, this money was distributed to the accounts of other private companies.. One of the recipients of these funds was a deputy of the Kyiv Regional Council from the “Radical Party of Oleg Lyashka” – Natalia Gunko. 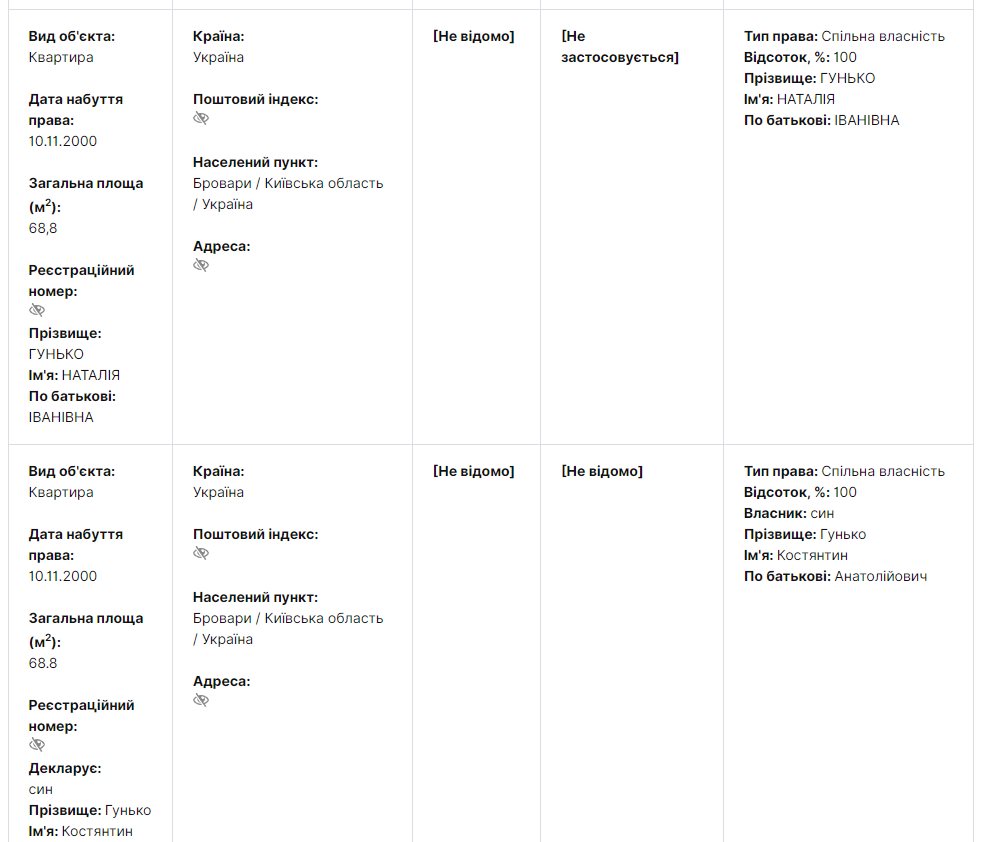 The Gunkov family also registers a collection of jewelry and watches of elite brands, in particular – Breitling, Rolex, Longines, Damiani. Interestingly, the value of the property is not indicated in the declaration.. Apparently, not to shock the voters. 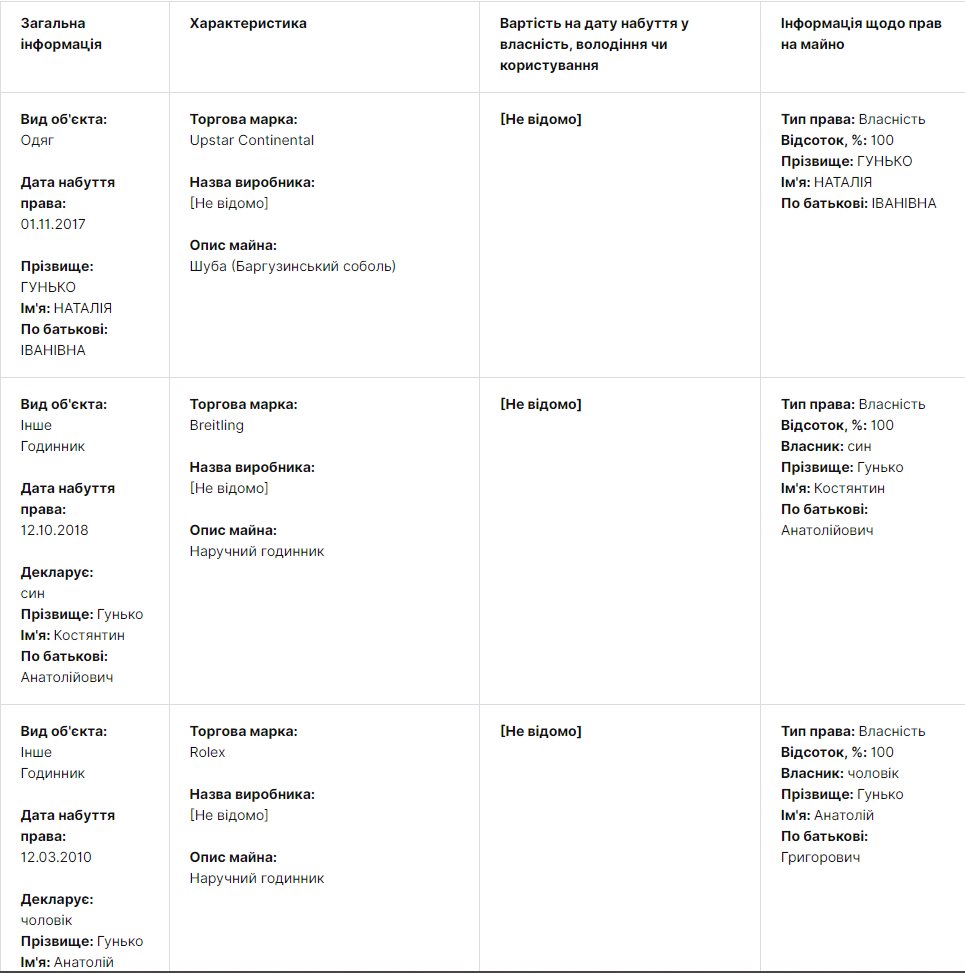 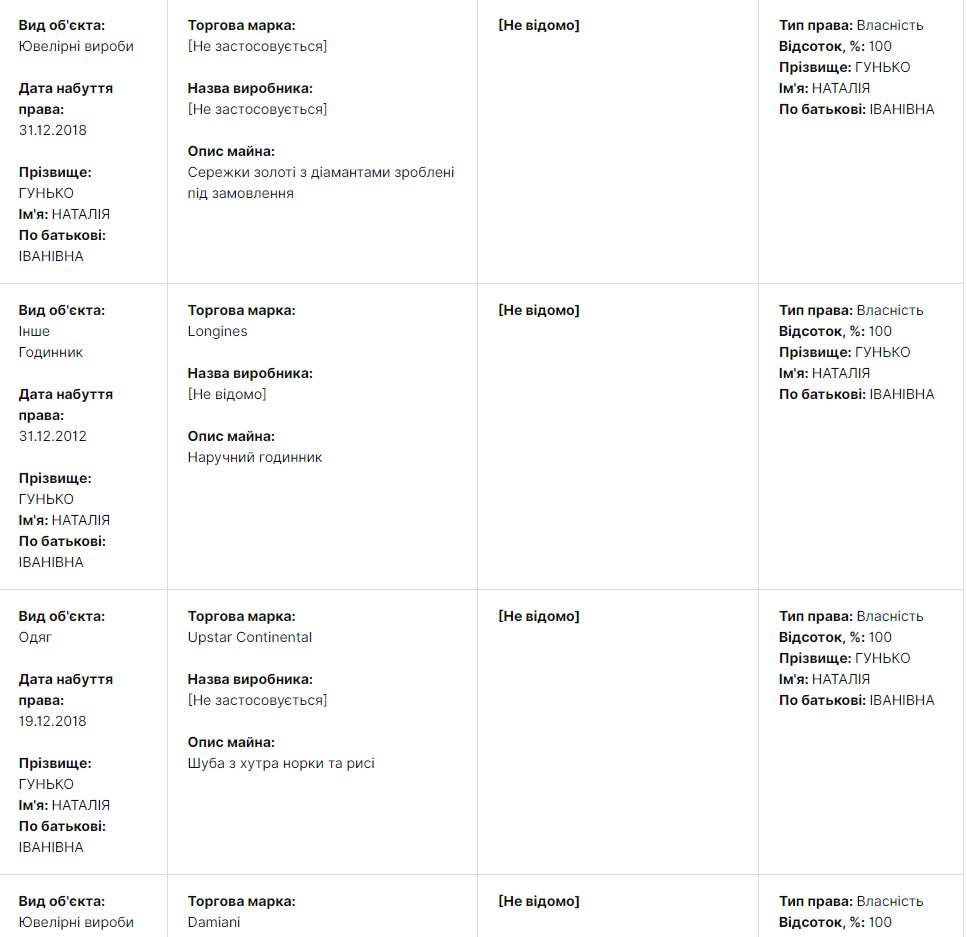 In the declaration of the deputy, there were no two cars and the husband’s apartment

On May 15, the Pechersky District Court of Kyiv lifted the arrest of Anatoly Gunko’s property in the case of the theft of 94.67 hectares of state lands of the State Enterprise “Radio Transmitting Center” in Brovary, which the Prosecutor General’s Office closed a year ago. However, in the annual declaration of his wife, who is a deputy of the Kyiv Regional Council, part of this property is not indicated.. This is evidenced by the decision of May 15 and the data of the Unified State Register of Declarations. 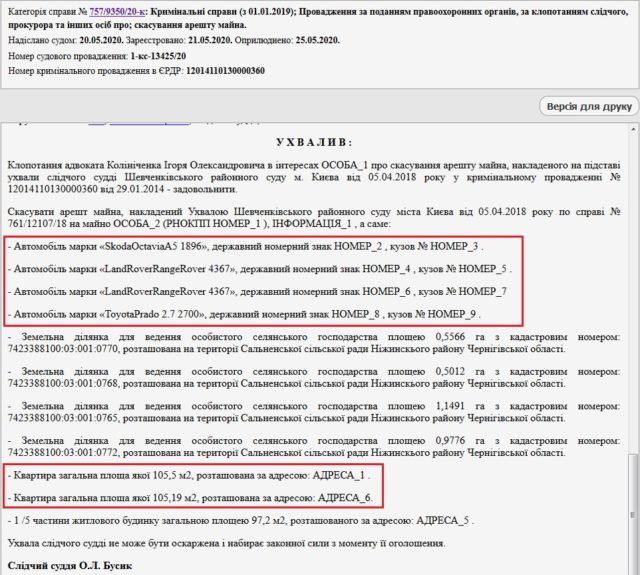 So, on May 15, the court lifted the arrest from the property of Anatoly Gunko, namely: four plots, part of a residential building, two apartments with an area of 105.5 sq.. m and 105.19 sq.. m, as well as four cars (Skoda Octavia A5, two Land Rover and Toyota Prado 2.7 2700). The arrest of this property was imposed by the court on April 5, 2018. Meanwhile, on May 21, the deputy of the Kyiv Regional Council, Natalia Gunko, filed an annual declaration for 2019, in which there is no data on some of the property of her husband Anatoly Gunko, which is indicated in the court order, namely: about an apartment with an area 105.19 sq m and Land Rover and Toyota Prado. 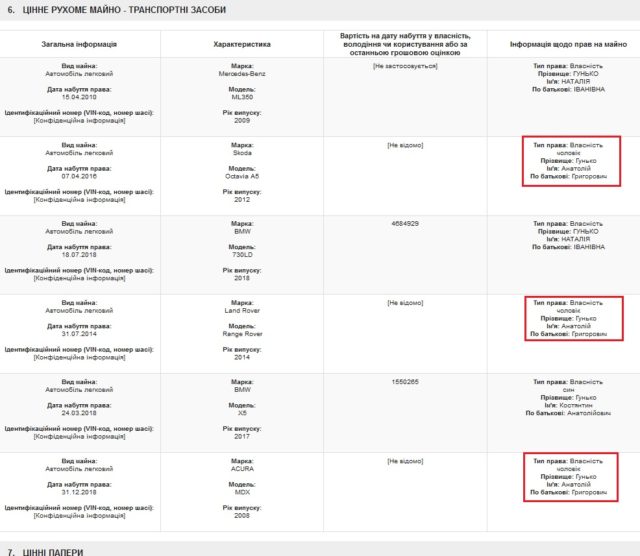 Natalia Gunko defector from one party to another. Apparently, it doesn’t matter what political ideas to support, the main thing is to stay in power.. In the past, together with her husband, thanks to their connections and knowledge, they managed land affairs very successfully.. Also, you can not miss her incredible collection of jewelry and fur coats.. It’s scary to think what other financial frauds are going on through Natalia Gunko, about which, unfortunately, the media does not know anything …