Ukrainian politician, People's Deputy of Ukraine of the VIII and IX convocations. Lead ...

Occasionally appears in the media and other political shows ...

A corrupt official, a close person of Poroshenko ...

Poroshenko's freaks are everywhere! One of them is Artur Gerasimov, co-chairman of the BPP faction. He was part of the team of the odious Sergei Shakhov, and used his methods in order to win the elections. Members of Shakhov's team, including Gerasimov, distributed to voters in their constituencies special "membership books" in which there were 30 tear-off coupons, each of which could be "cashed out" for 50 hryvnia. , and in order to receive money, it was necessary to come to rallies and events dedicated to Shakhov and Co. and exchange coupons for money. Everything is correct, nothing legal, as usual. Artur Vladimirovich also makes friends with terrorists, and although he himself denies this, there is one hundred percent confirmation of this fact. 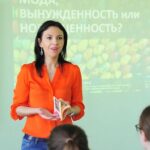 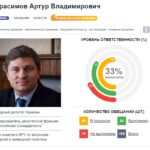 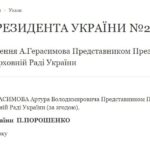 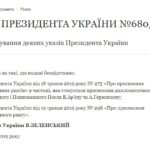 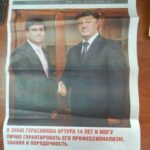 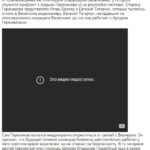 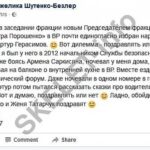 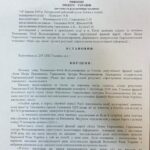 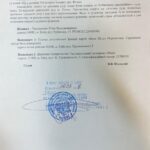 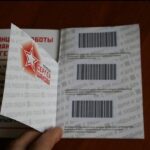 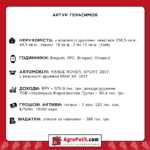 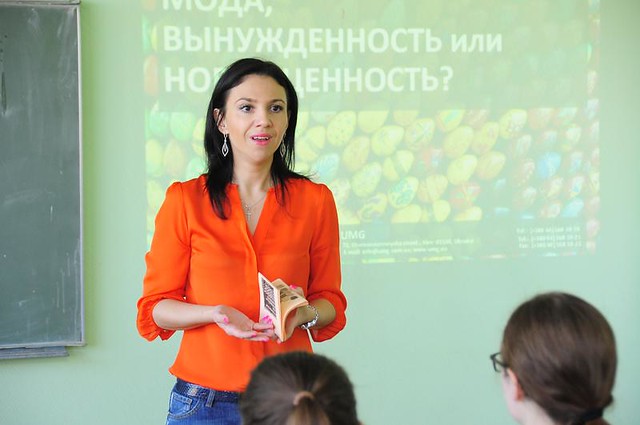 The couple has five children – daughters Ekaterina and Maria, as well as sons Alexander, George and Danil. 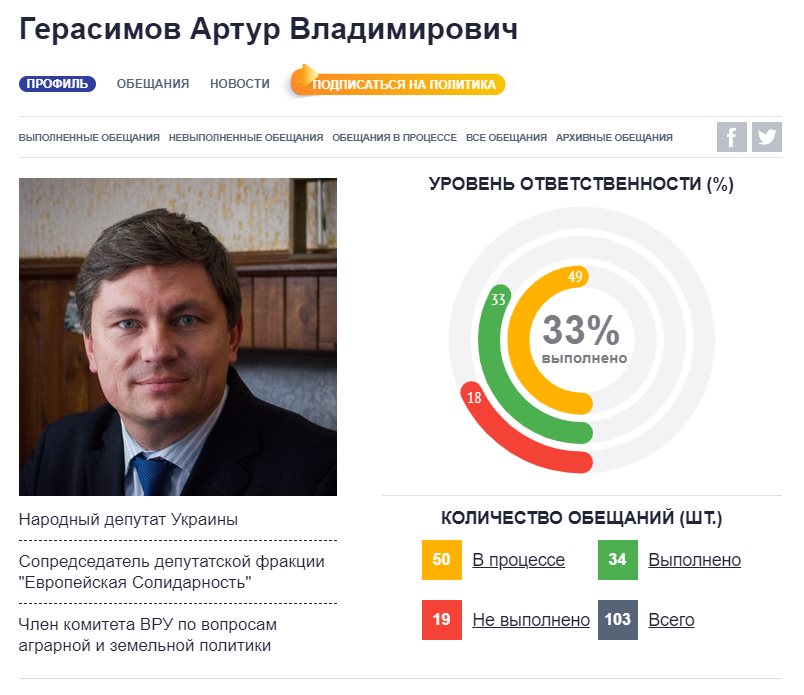 On May 18, 2019, President of Ukraine Petro Poroshenko, on the proposal of the Ministry of Foreign Affairs, awarded Gerasimov the rank of Ambassador Extraordinary and Plenipotentiary of Ukraine. The assignment of a high diprang to politicians from the presidential coalition (in particular, Gerasimov) caused criticism from the diplomatic corps. 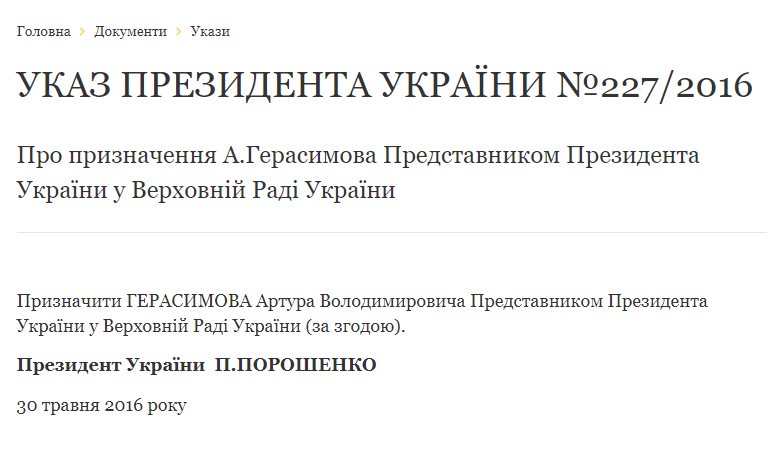 Career diplomats (in particular, Ukrainian Ambassador to Italy Yevhen Perelygin) stated. that “the assignment of high-level diplomatic ranks to people who are not members of the diplomatic corps is not professional and insulting from a moral point of view”. There were also doubts about the legality of such a decision.. it was appealed to the Kyiv District Administrative Court. On September 11, 2019, by the decree of the President of Ukraine Volodymyr Zelensky, the decree of Petro Poroshenko was declared “issued unreasonably”. In February 2020, Artur Gerasimov sued President Volodymyr Zelensky, demanding that his decree be recognized as illegal. 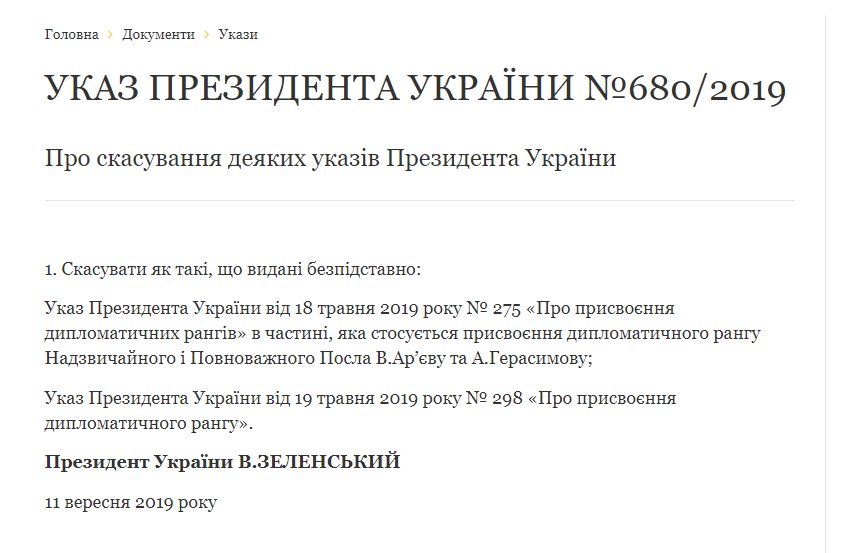 Artur Gerasimov has long declared his closeness to Poroshenko. Back in the 2012 elections in his constituency, he claimed in his campaign materials that Petro Poroshenko supported his candidacy. 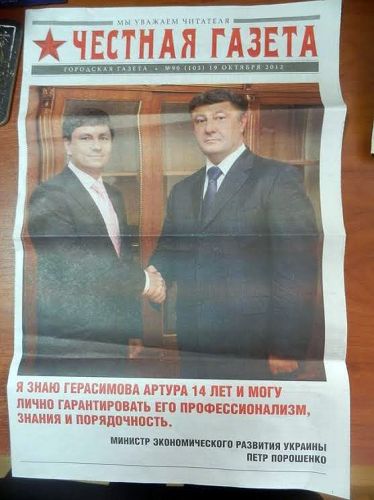 In the early parliamentary elections of 2014, Gerasimov no longer had to put forward his candidacy in the district. He entered the parliament on the lists of the Petro Poroshenko Bloc and today is one of the members of the presidential faction in parliament. In the presidential team, Artur Gerasimov became responsible for the Donetsk region, where several major scandals have also been associated with his name in recent years. Gerasimov was accused of selling elections in a number of majoritarian districts in 2014, as well as selling BPP city party organizations to local oligarchs willing to pay for party posts. Earlier, Politeka wrote that the head of the Petro Poroshenko Bloc faction was in contact with the DPR militants.. The militant himself spoke about the connections between the head of the presidential party Artur Gerasimov and the militant Igor Bezler “Bes”. 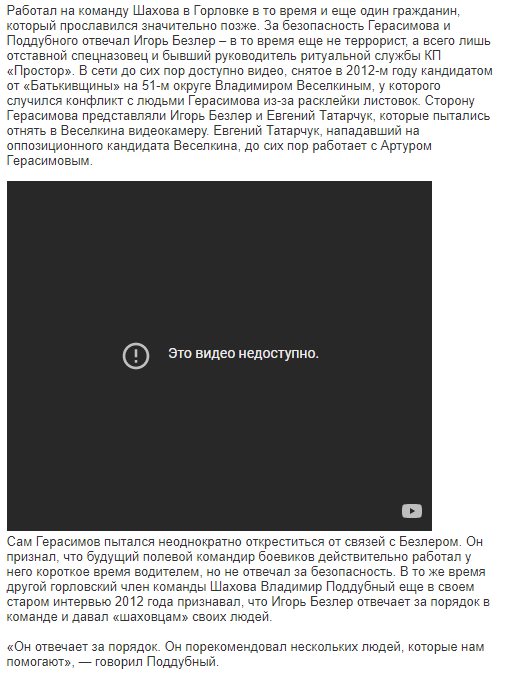 “People’s Deputy Artur Gerasimov was almost unanimously elected as the new chairman of the BPP faction in the Rada. Here is the dilemma – to congratulate or not? It seems like I was his head of security in 2012. Arthur, even afraid of Armen Sargsyan, spent the night at my house, in the evenings talking on the balcony about the internal kitchen in VR. Together we went to Yalta for the economic forum. We even spent the night in the same hotel room,” Bezler wrote on the social network. 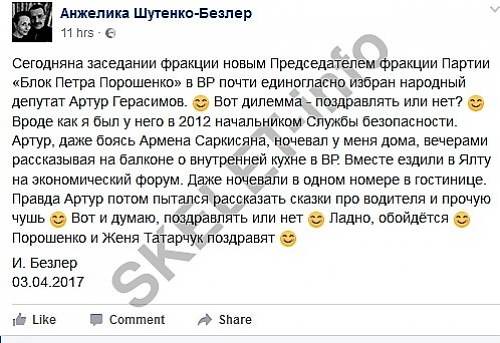 Irina Gerashchenko, Vice Speaker of the Verkhovna Rada, commented on the information that Bezler worked for Gerasimov. According to her, the main thing is that Gerasimov “remains a patriot.” “Many people during the war showed their real rotten insides. The main thing is that Arthur is a patriot and Ukrainian. And he is a very successful chairman of our delegation to the OSCE,” said the MP. On March 12, Artur Gerasimov, People's Deputy from the Petro Poroshenko Bloc, while speaking from the rostrum of the Verkhovna Rada of Ukraine, turned on an audio recording on his phone, in which Yulia Tymoshenko and Igor Kolomoisky were allegedly talking. Gerasimov's act caused a scandalous reaction among members of parliament, especially among deputies from the “Fatherland”. On the audio recording, you can hear two people talking, whose voices are very similar to the voices of Yulia Tymoshenko and Igor Kolomoisky. Tymoshenko on the recording allegedly congratulates Kolomoisky on his birthday and emphasizes that Kolomoisky “knows how to be a true friend and a true partner in all important matters.” 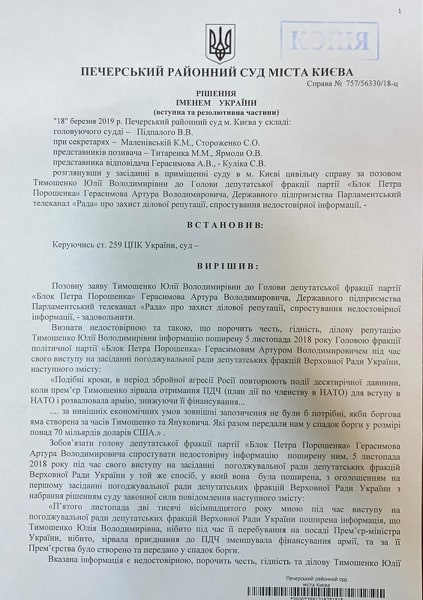 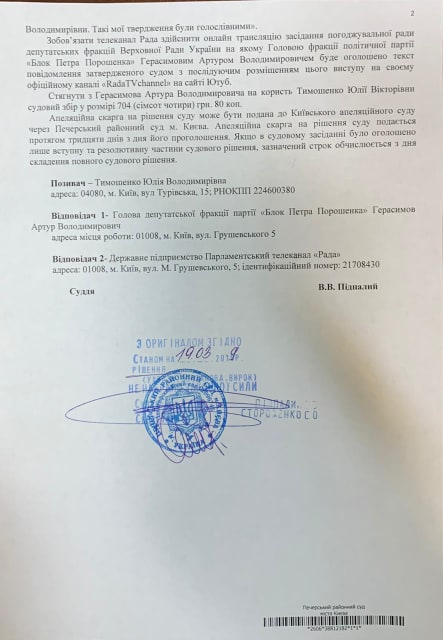 Gerasimov sold the district to Efimov

In some sources, Gerasimov was even suspected of corruption: he allegedly took “remuneration” for appointments to the positions of heads of city party organizations “Solidarity” (this status automatically provided seats in city councils) and for the distribution of candidates for elections to the Verkhovna Rada by districts – for example, 48 th district (g. Kramatorsk), as informed sources wrote, was “sold” to Maxim Efimov, and the 53rd (g. Uglegorsk) – Oleg Nedava.

Conflict in the Mariupol checkpoint

Another scandal, in which the name of Gerasimov was mentioned, was written by the Fourth Power last year, on the eve of local elections.. A loud conflict arose in the Mariupol city organization of the BPP, whose former head Sergei Nesterov accused Artur Gerasimov of selling the organization to local businessman Yuri Ternavsky. In this scandal, Artur Gerasimov’s assistant, already familiar to us, Yevgeny Tatarchuk, who, together with Igor Bezler, attacked Vladimir Veselkin in Gorlovka. Sergei Nesterov said that Tatarchuk threatened him and recorded his threats on a voice recorder. Tatarchuk can also be recognized in this video, which was filmed by the journalists of the Public TV of Donbass. It is also worth noting that a similar story happened in Slavyansk, where, on the initiative of Artur Gerasimov and Oleg Nedava, he was removed from his post. mayor of Slavyansk, Ukrainian patriot and longtime ideological opponent of the Party of Regions Oleg Zontov. Ukrayinska Pravda wrote about this in detail in its publication.

Probably, President Poroshenko had very good reasons to appoint a person with such a background as his representative in the Verkhovna Rada. Apparently, the business qualities of Artur Gerasimov are so high that the guarantor is not embarrassed even by his obvious connection with Yura Enakievsky. It can be assumed that Gerasimov and Poroshenko are connected by some common business, but evidence of this has not yet been found.. But one way or another, everything goes to the fact that after a while the name of Gerasimov will become on a par with the names of other odious representatives of Petro Poroshenko's entourage – Kononenko, Berezenko and Granovsky. Follower of Sergei Shakhov

Gerasimov first came to prominence in 2012 when he announced his candidacy for the Verkhovna Rada in the majority constituency No. 51 in Gorlovka. In this city, Gerasimov went to the polls as a representative of the “team of Sergei Shakhov” – an odious businessman from Stakhanov, Luhansk region. Members of Shakhov's team handed out special “membership books” to voters in their constituencies, reminiscent of Soviet party cards.. To obtain such a booklet, it was sufficient to show a residence permit. Each book had 30 tear-off coupons, each of which, in turn, could be “cashed out” for 50 UAH. Having received such a ticket, the voter had to come with him to the rallies of representatives of the Shakhov team and exchange tear-off coupons for money from the “controllers”. The scheme worked very effectively. Thanks to her, many people always came to the rallies of Shakhov's team members, although the team members themselves were mostly unknown to anyone.. Shakhovtsy called the distribution of money “material assistance”. 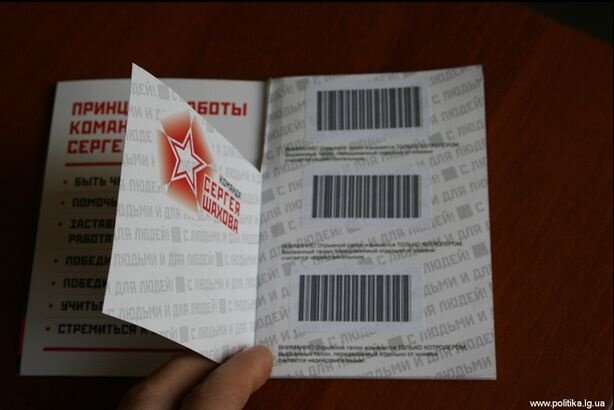 Artur Gerasimov, and another representative of Shakhov's team in Gorlovka, Kyiv businessman Vladimir Poddubny, who ran in the neighboring 52nd majoritarian district, were unknown strangers to the city. However, the people really liked the “red books” and “coupons” of candidates. Therefore, the performances of Poddubny and Gerasimov were popular. Information about how members of Shakhov's team bought voters in different cities of Donbass can be found today in abundance using any Internet search engine.

According to the website Gorlovka.ua, the total number of recipients of “material assistance” in districts No. 51 and 52 has reached 20,000 people. However, in the end, this did not help Gerasimov and Poddubny win, both of them took only second places in their districts. It was impossible to defeat the representatives of the Party of Regions in Donbass in 2012.

Artur Gerasimov spent 375 thousand on education in 2017. hryvnia. This is stated in the income statement of the deputy, published on the website of the NAZK. By the way, spending on education turned out to be more than the entire annual income of the family.. In 2017, Gerasimov declared 247,000. hryvnia salary, Gerasimov's wife – 54 thousand. hryvnia 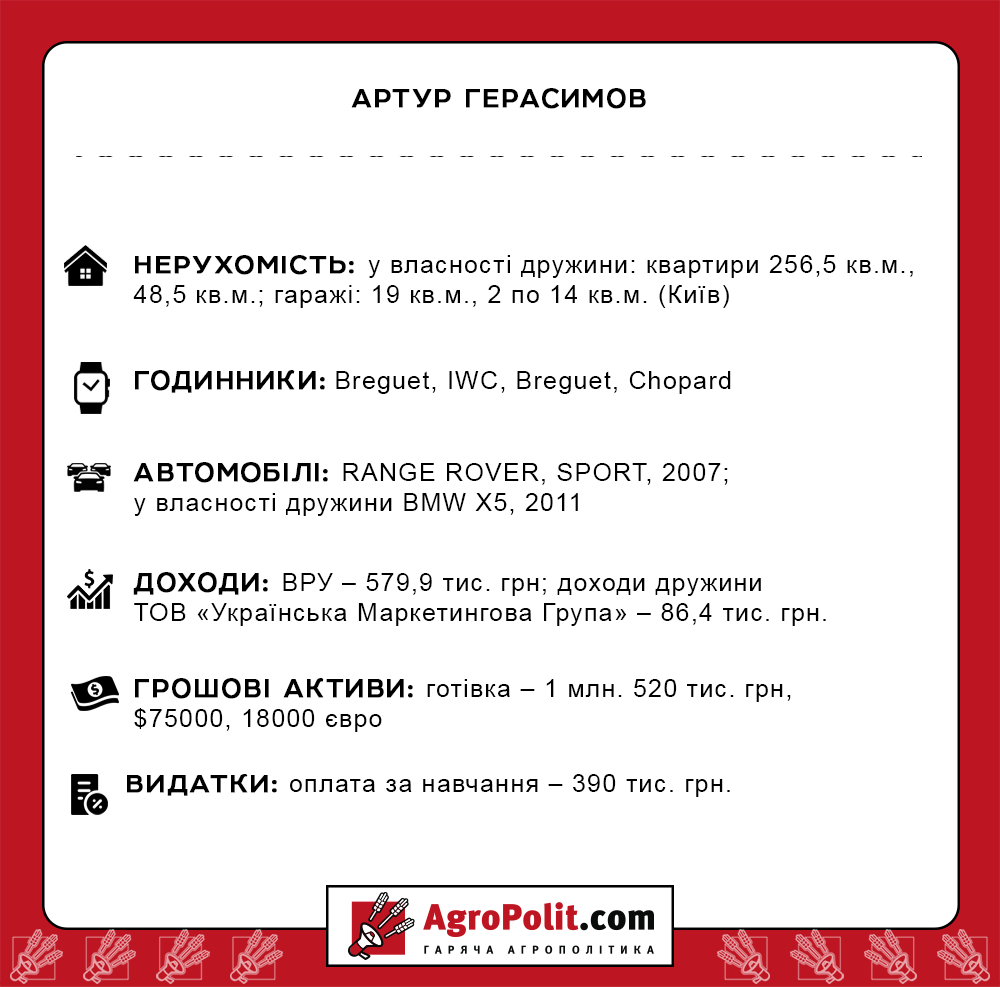 The Gerasimov family also declared two apartments in Kyiv, Opel Vectra and BMW X5 cars and two garages. Savings in bank accounts are not indicated in the declaration. The family keeps 2.78 million hryvnias in cash, 83 thousand. dollars, 22 thousand. Euro. The people's deputy and his wife declared 2 Breguet watches and Chopard and IWC watches.

All policies in one person. The same schemes, the same actions. Gerasimov is no exception. Bribery of voters, corruption, expensive cars, jewelry, real estate. Everything is like everyone else. And of course, all his actions are not punishable. After all, Arthur is the right hand of Poroshenko.