Mayor's daughter, insta-blogger, not a successful singer, lover of expensive parties a ...

actively leads instagram and other social networks - opinion leader, there are connections ...

The daughter of a scandalous corrupt politician, a girl with half-naked photos. ...

There are no official offenses, but a huge fortune and life in a big way suggests otherwis ...

A doll with minimal knowledge of politics. So you can say about Alla Mikhailovna Dobkina. She has not yet decided on the choice of profession in this life. Either she is a designer, or she is a singer. Most did not appreciate her song "Moore – Mur": "What else to do when my father stole money." Approximately so commented on her work on Instagram. Recall that Alla Mikhailovna, the daughter of the former mayor of Kharkov – Mikhail Dobkin, a man who profited from Kharkiv residents with the help of low-quality transport. Yes, and Alla's husband, far from the last person in the Dobkin Clan. 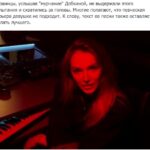 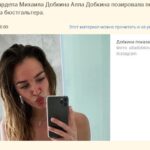 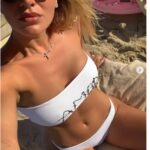 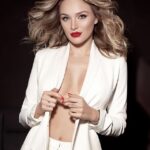 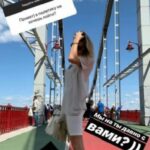 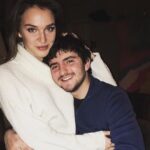 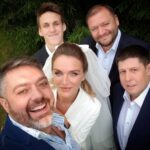 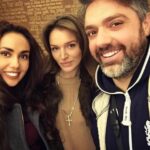 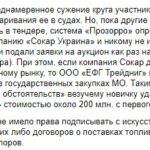 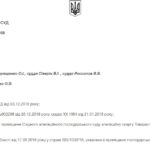 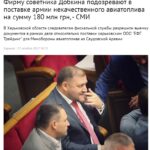 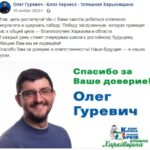 Daughter of a corrupt father 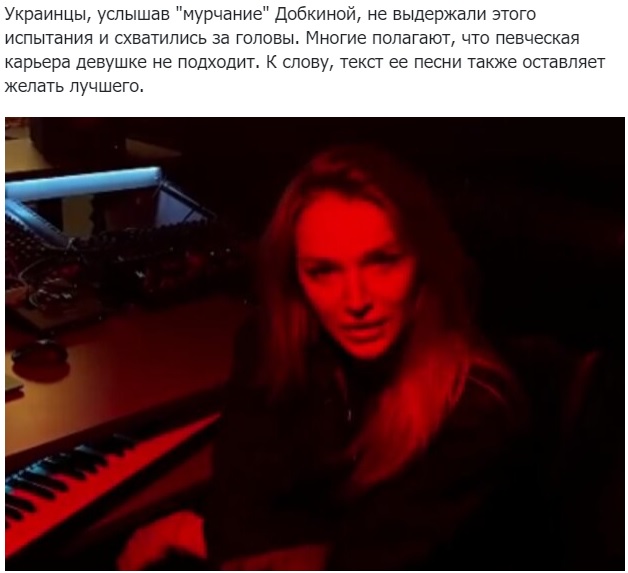 It is also known that Alla Dobkina has a charitable foundation “AMD Help”.

Dobkina Alla Mikhailovna – “a girl without complexes”. The daughter of the ex-people's deputy from the Opposition Bloc Mikhail Dobkin posted a video on Instagram for which she posed topless, covering her bare chest with her hands. 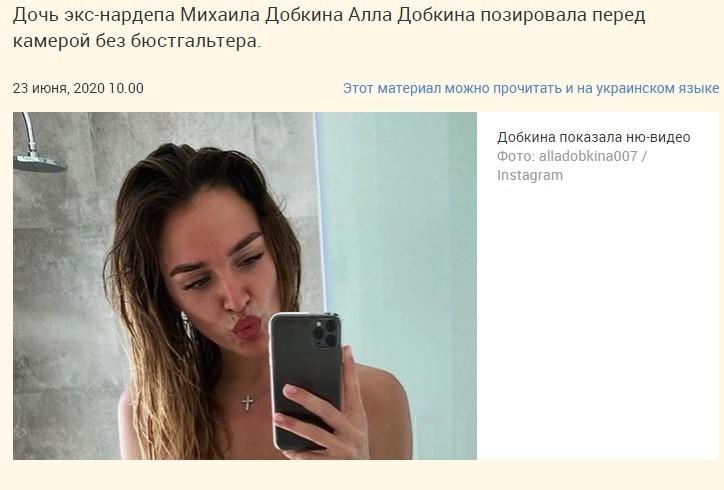 Like all rich girls, she loves to travel.. Favorite vacation spot Maldives. Therefore, pictures in skimpy bikinis are not uncommon. 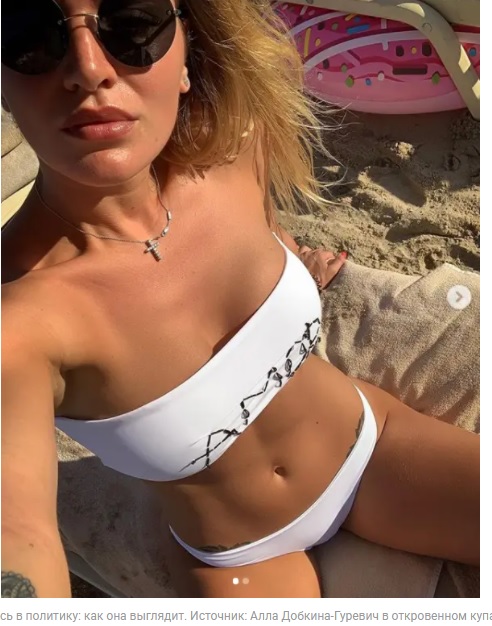 After unsuccessfully trying her luck in fashion design and sitting at home on maternity leave, the girl made her debut as an artist by recording the song “Mur Mur”, but opinions about her work were divided. 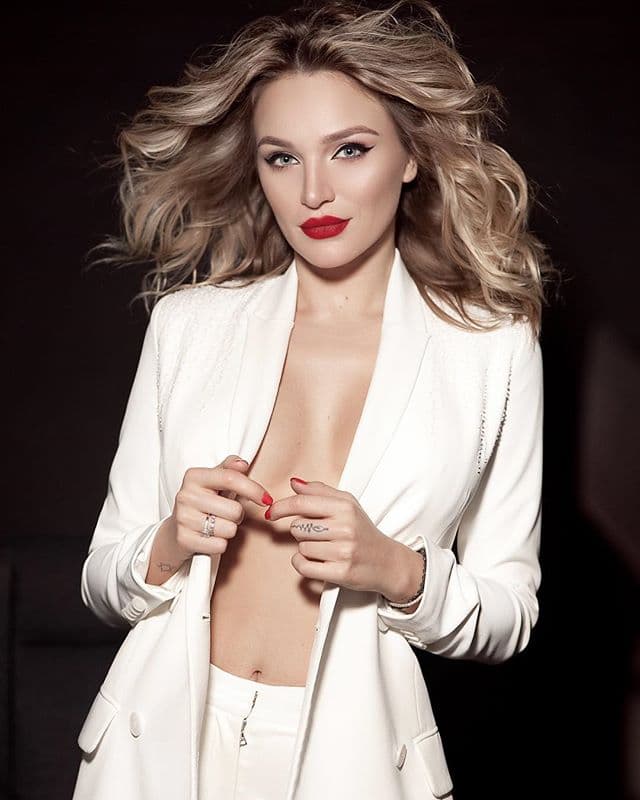 She was cold to politics, believing that it was “not a woman’s business”, but recently on her Instagram, to a subscriber’s question: “Does she think about going into politics?”, She replied “I plan to”. And this is disturbing. 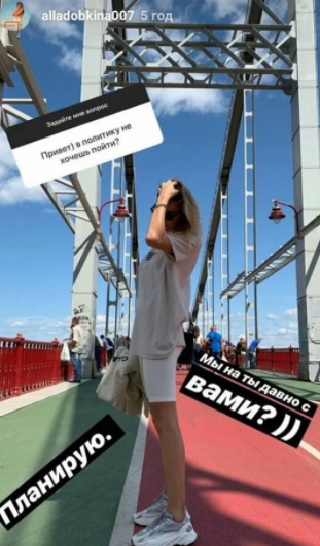 Alla Mikhailovna got married in 2017, and a couple of days before the wedding, she went with three friends to Monte Carlo to celebrate a bachelorette party. The #Nomoredobkina party started at the four-star Fairmont Monte Carlo hotel and continued at one of the most popular nightclubs owned by the Prince of Monaco. At the wedding, she changed several outfits, chose a dress from a well-known brand worth more than 200 thousand hryvnias. Why not, the groom is wealthy and wealthy. Alla's chosen one is Oleg Gurevich Jr. 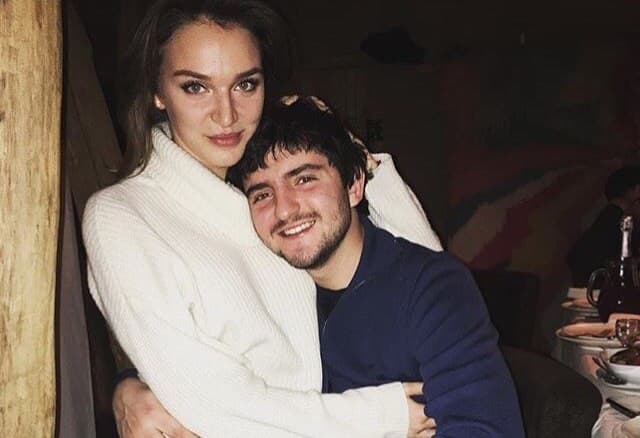 Most likely, this is the son of Dobkin's former adviser on energy issues, also Oleg Gurevich, whose firm grabbed over 81 million hryvnias in tender transactions during 2012-2014. 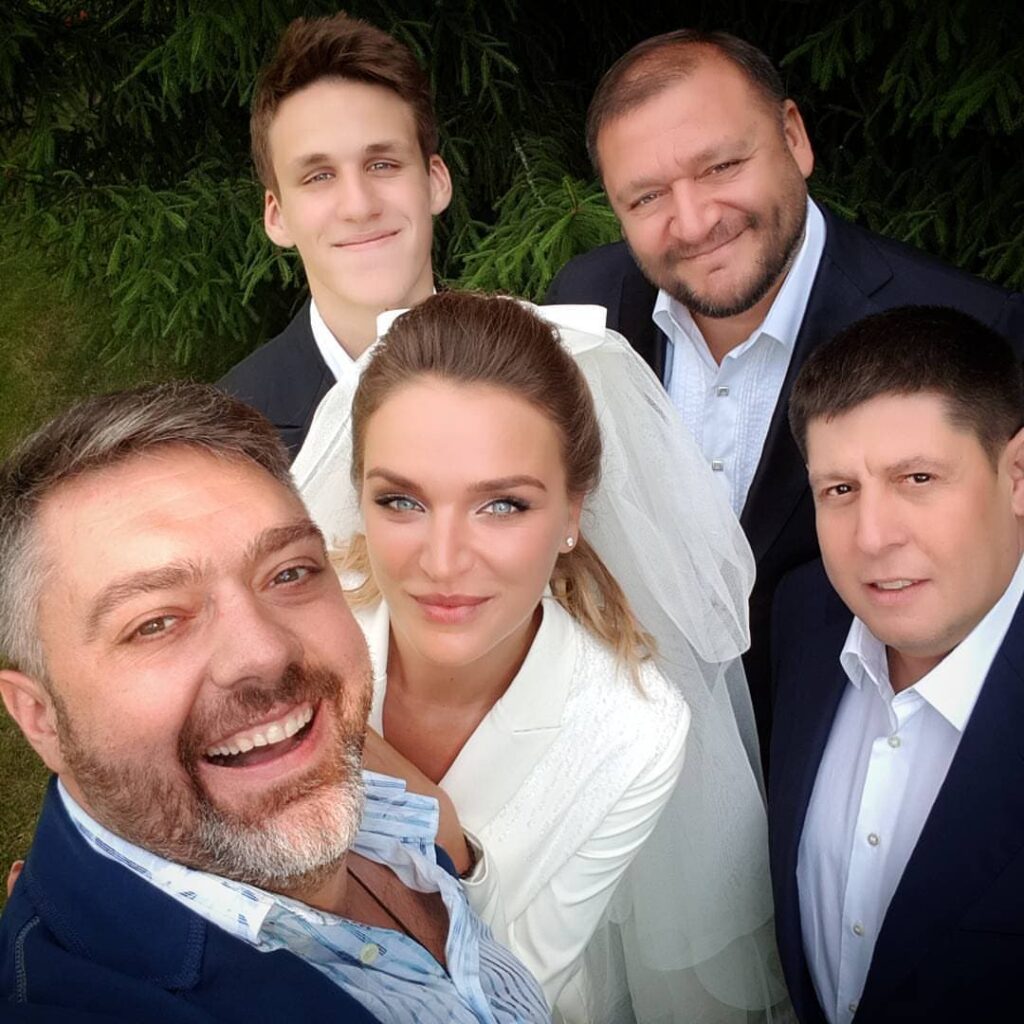 People from Mikhail Dobkin's entourage make money on transport, which the townspeople use every day. “We need quality transport because it's a necessity for us, but for them it's just business.” Almost every week there is news that another tram has “drifted” in Kharkov. But why do Kharkiv residents have to pay more and more for the use of transport if it is in an almost emergency condition? There are several tram enterprises in the city, but two of them, Saltovskoye and Oktyabrskoye, leased 31 trams from AMK Service LLC at the beginning of 2019. It cost 4 million 650 thousand. UAH. At the same time, Kharkiv buys decommissioned European trams at inflated prices.. Drade Oil and AMK Service LLC have a clear connection – they have the same contact number, which means that their owners are the same people. The owner of “Dreid Oil” is Oleg Gurevich – ex-adviser of Mikhail Dobkin, when he was the Kharkov governor. The current owner of AMK Service LLC, Anna Tarasova, has a part of the shares in the ZIM SV company, the main shareholder of which is Dobkin's son-in-law. At the same time, AMK Service rents out wagons to the city, which the company “seems not to have”. In many photos with Alla, TV presenter Alexei Diveev – Church also appears. 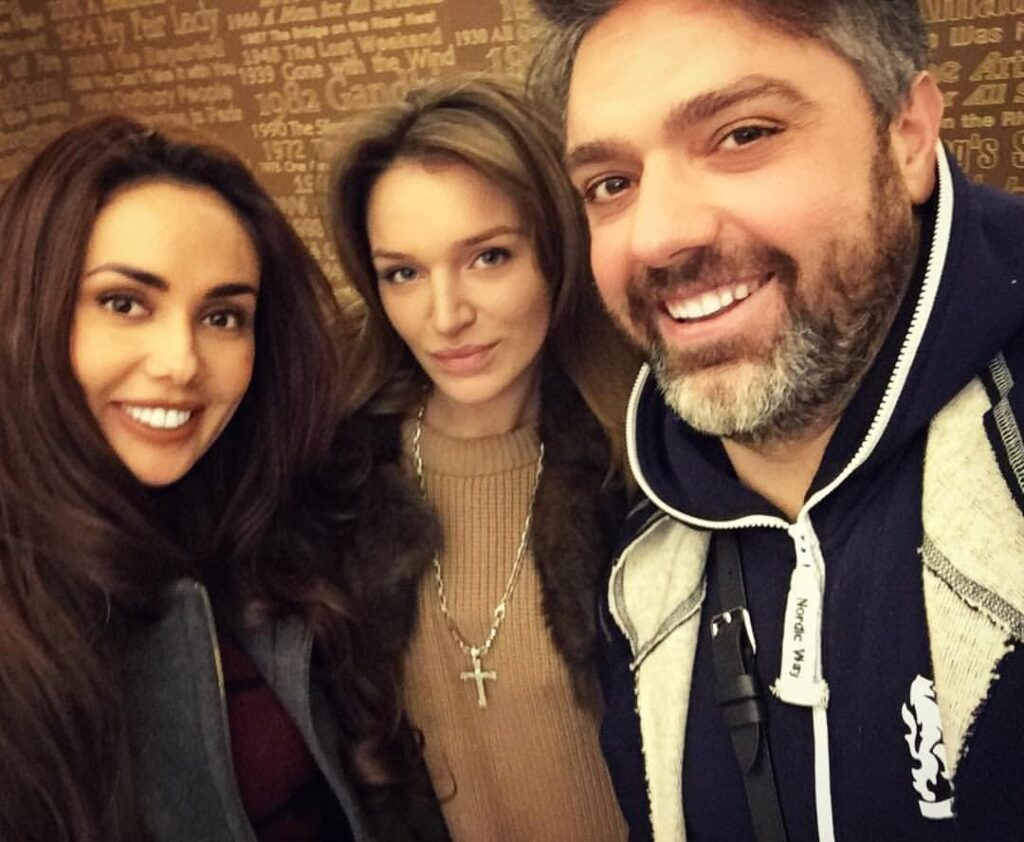 “EFG Trading”, and the communion of Gurevich

The commercial director of EFG Trading is Oleg Olegovich Gurevich, the son of Oleg Gurevich, Mikhail Dobkin's adviser on the fuel and energy complex during his governorship, and more recently, Dobkin's son-in-law. According to investigators, officials of EFG Trading LLC committed an official forgery when in May 2017 they entered into an agreement with the Ministry of Defense on the supply of Jet A-1 aviation kerosene for a total of UAH 181.49 million.

We are talking about an order of 6.1 thousand. tons of jet fuel at a price of 19,999 UAH/t. and 3 thousand. tons at 19,833 UAH/t. The company undertook to supply the military department with fuel for jet engines produced by Lukoil Naftohim Burgas Ltd (Bulgaria) of the Russian company Lukoil and Esso Italian Srl (Italy). The quality of jet fuel must comply with GOST 4796:2007. However, the company supplied fuel manufactured by “Saudi Armako Total Refining And Petrochemical Company” (“SATORP”, Saudi Arabia), while providing a quality certificate of fuel compliance with the requirements of GOST 4796:2007. According to Enkorr, EFG Trading is a retail

Subdivision of Chuguev PP “NP-Trading”. This company was included in the list of companies to which on February 6, 2017 the Ministry of Economic Development, on the proposal of the SBU, applied sanctions in the form of a temporary suspension of foreign economic activity. But despite the court's ban, a month later, the Ministry of Defense is trying to purchase fuel from the unknown EFG Trading with an overpayment of UAH 30.4 million. 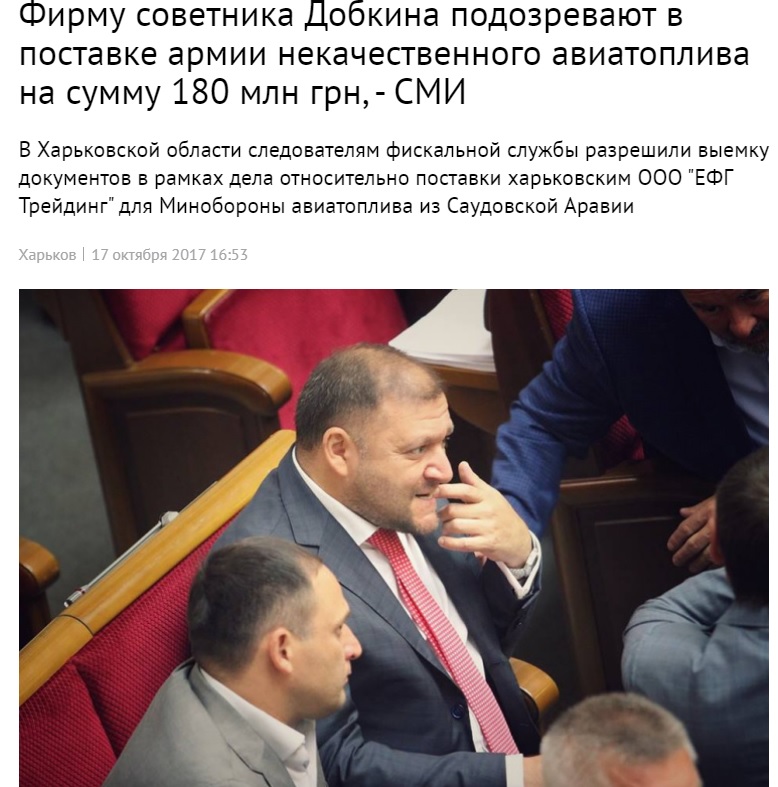 A month after the announcement of the tender, by decision of the Dnipropetrovsk District Court, the specified procedure for the purchase of aviation gas was declared illegal. , however, the scandalous tender was not canceled in the Ministry of Defense. It seems that, despite the verdict of Themis, the defense department still set out to sign contracts with EFG Trading and Sokar at any cost. This court decision confirms the bad faith of the company. Indeed, in addition to low-quality fuel, the company also violates the terms specified in the contract: “The Ministry of Defense of Ukraine returned to the state court of the Kharkiv region with a summons, in order to ask for a contract from TOV “EFG Trading” 1226580.20 UAH. a penny The lawsuit is based on the defendant's violation of the terms of the contract concluded between the parties for the supply of oil and distillates (aviation kerosene) for state needs, for special purpose equipment (with funds from the State Budget of Ukraine) No. 286/1/17/12 of 05/15/2017 regarding the supply of products to the stipulated period, for which the terms of this contract provide for the responsibility of the defendant in the form of payment of a penalty.” Gurevich earned more than 150 thousand hryvnias at EFG Trading in 2019. This means that he received about UAH 12,500 per month.. He also borrowed three million hryvnias from his father. Mikhail Dobkin's son-in-law keeps 2,700,000 hryvnias in cash. These data are indicated in the declaration that he submitted, since he was elected a deputy of the Kharkiv Regional Council (“Kernes Block”). 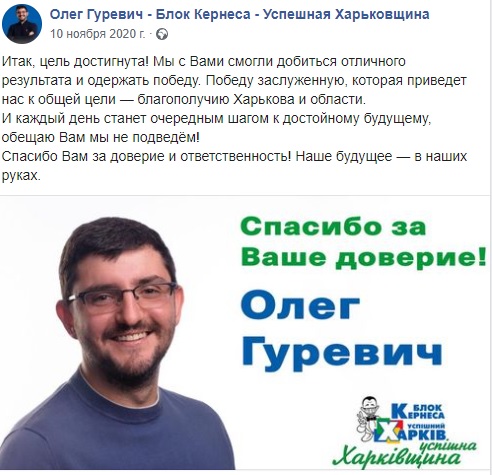 The document was published on the website of the National Anti-Corruption Agency. According to Oleg Gurevich's declaration, his family members are his wife, Alla Dobkina-Gurevich, and son, Mark Dobkin. Son-in-law Mikhail Dobkin has an apartment in Kyiv with an area of more than 92 square meters, he acquired real estate in 2015, his price was not indicated. He also has an apartment in Kharkov with an area of more than 140 square meters, Oleg Gurevich became its owner in 2013, the cost is also not indicated. She rents an apartment in Kharkov from her father, Oleg Gurevich, its area is 65.2 square meters. The newly elected deputy of the Kharkiv Regional Council drives a 2014 BMW X6. Probably, he saved up for a BMW and three apartments for a long time, with an income of UAH 12,500. per month. The declaration of Oleg Gurevich does not indicate real estate, cars, earnings and savings of his wife.

Alla Mikhailovna Dobkina, a pretty, attractive girl, but hardly suitable for politics. But her husband and father obviously know a lot about this, and working together, they made good money on Kharkov transport and fuel, thanks to which Alla Mikhailovna can afford to rest in the Maldives and Monte Carlo. Fortunately, or unfortunately, Alla has not yet joined the political Dobkin Clan, but this is only a matter of time.