First Deputy Chairman of the Security Service of Ukraine - Head of the Anti-Terrorist Cent ...

rarely appears in the media, does not show his face ...

a person who illegally appropriated a relict forest, and incorrectly indicated information ...

unreliable information in the declaration, illegal appropriation of protected lands ...

Baranetsky Ruslan Fedorovich, although he does not show his face to the public, his deeds speak for themselves. They learned about the desecration and destruction of the relict forest in 2015. There are no documents confirming the permission for deforestation. Baranetsky and his colleagues had a hand in the illegal privatization of the reserved forest. Ruslan Fedorovich also indicated false information in the declaration, underestimating the cost of his acquisitions. 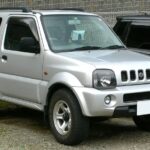 Date and place of birth: July 5, 1971. (age 49), Kostrizhevka, Ukraine Ruslan Baranetsky is a combatant in the Donbass.

In 2014-2015, he headed the SBU task force for countering terrorism in the zone of the anti-terrorist operation. For his courage and heroism in 2014 he was awarded the Order of Bohdan Khmelnitsky III degree. A year later, Baranetsky received the rank of major general. 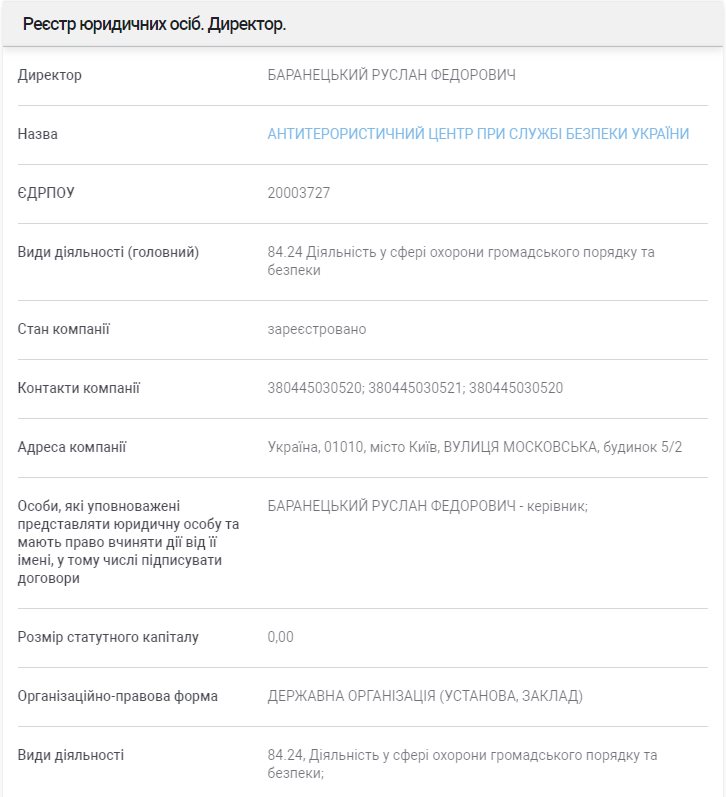 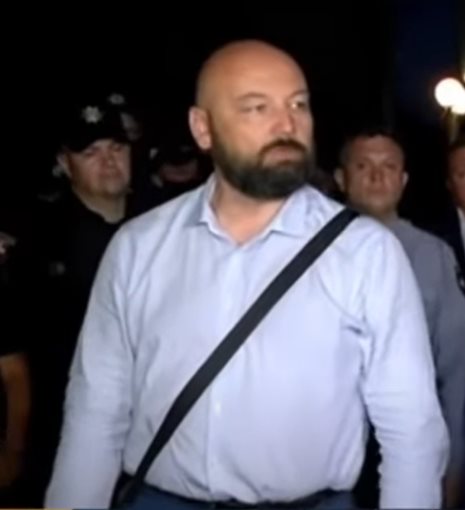 1993. – the beginning of military service in the state security agencies (in the regional department of the SBU, he held positions from a detective to the head of the direction). Since 2004. – in the Central Directorate of the Security Service (in ten years he has gone from deputy head of department to deputy head of the Main Directorate for Combating Corruption and Organized Crime. Member of the Interdepartmental Commission on the Policy of Military-Technical Cooperation and Export Control.

Around the forest in Lesniki in 2015 they put up a fence, guards in full gear (“the unkind old golden eagle”), and deforestation begins. Without official permission. 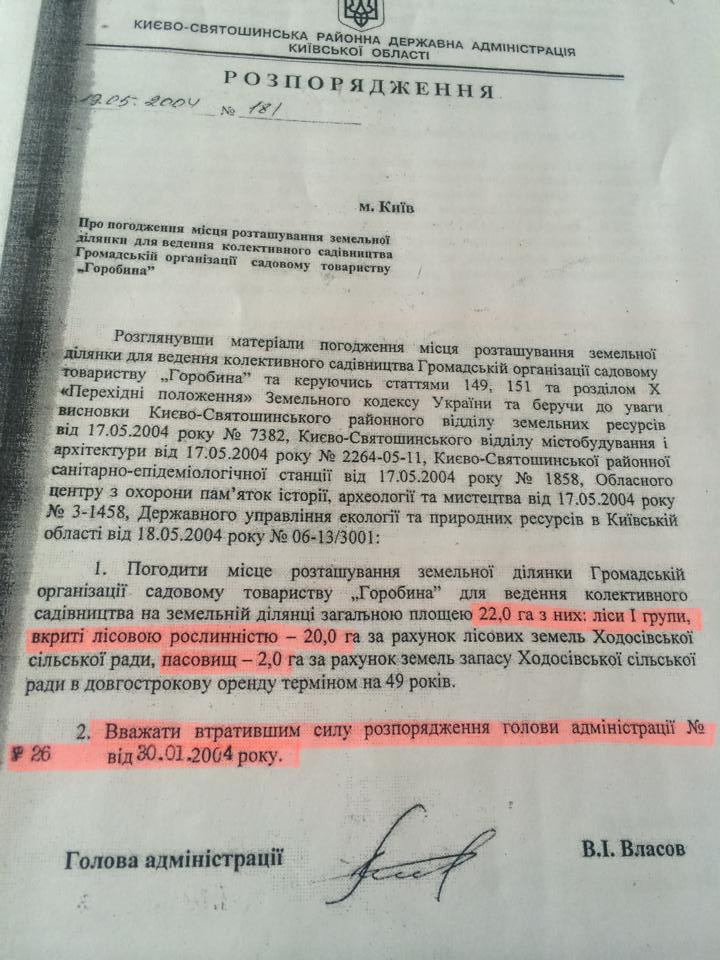 The list of people who privatized (how? Not a single document!) There are students, pensioners. And in the center – plots of three iconic characters. 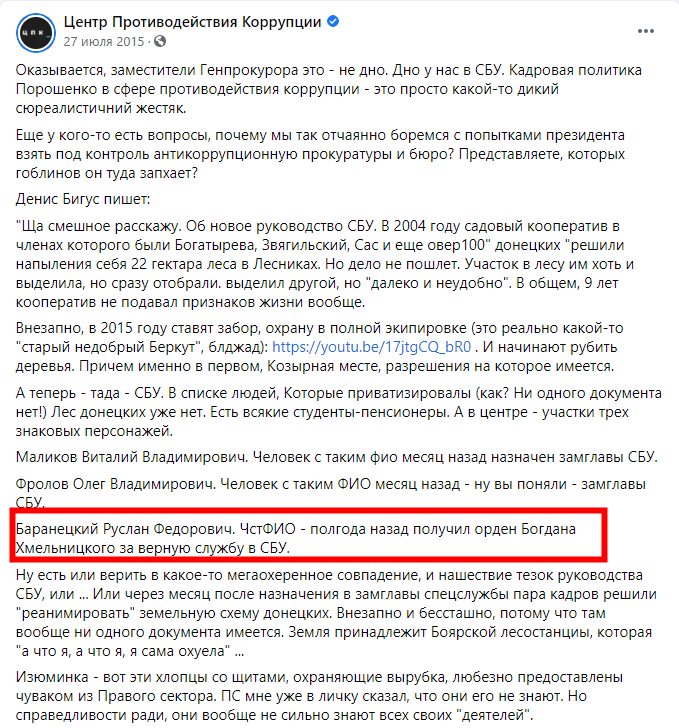 Bihus.info journalists traced which cars came to the anniversary of the chief military prosecutor Anatoly Matios

Land Cruiser by Tatyana Baranetskaya. “The next issue of our program was the Land Cruiser of Tatyana Baranetskaya, she is the wife of Major General of the Border Service Ruslan Baranetsky. I think that it was he who was the guest of Matios, but this is not certain.. For the exact fact that back in 2015 Baranetsky got into the Our Money program about the seizure and deriban of the forest by security forces. He was a colonel of the SBU at that time,” says Mokryak.

In his declaration, the deputy head of the SBU indicated, probably, the underestimated cost of his purchases. Ruslan Baranetsky has a wife and two children, on whom a significant part of the property is registered. Wife and daughter have higher incomes. Ruslan Baranetsky – 676 thousand hryvnias; Wife Tatyana – 3,772 hryvnias and 79,500 dollars; Son Denis – 5,236 dollars, 1,000 euros and a little more than 5,000 hryvnias; Daughter Marta – 1,328 dollars and 1.1 million hryvnias.

Baranetsky declared two apartments in Kyiv, two land plots outside the city and a house. Apartment of 130 square meters is registered to his wife and children. Then they paid more than 800 thousand hryvnias for it, it was about 100 thousand dollars. Baranetsky Ruslan in the Kyiv region has a plot of 12 acres, and his wife – 9 acres. On this site, the family is building a country house with an area of 249 square meters. 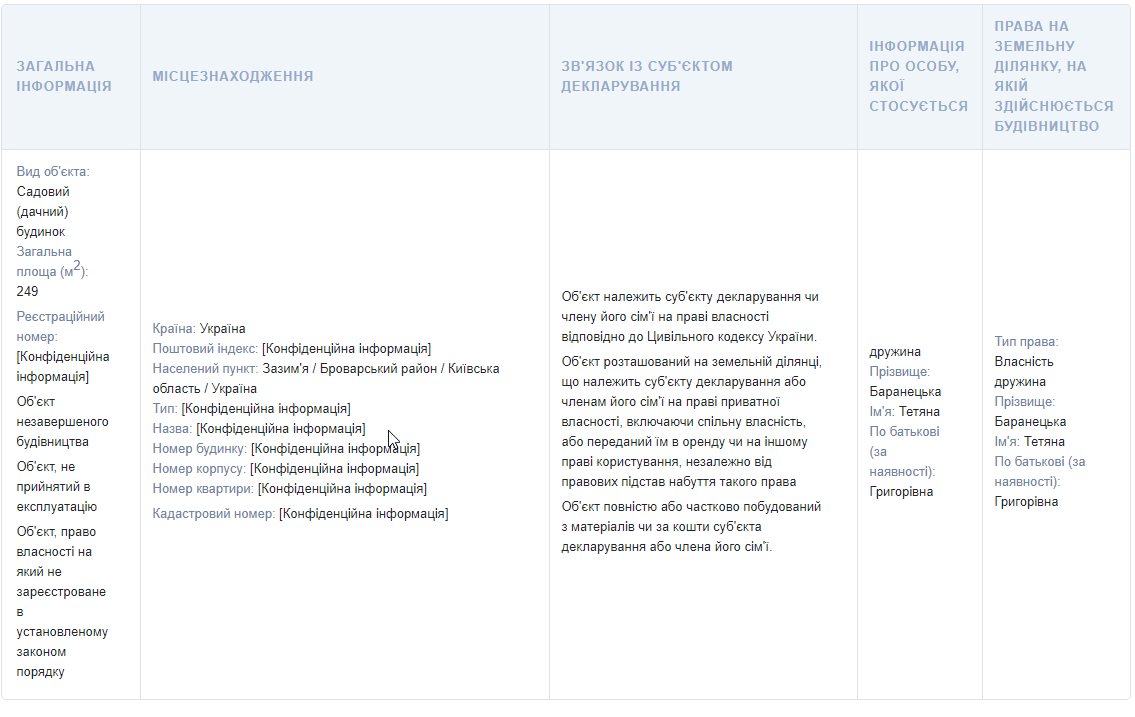 A 2008 Suzuki Jimny is registered to my son, which he bought last year for, note, 12 thousand hryvnias, that is, for less than $500 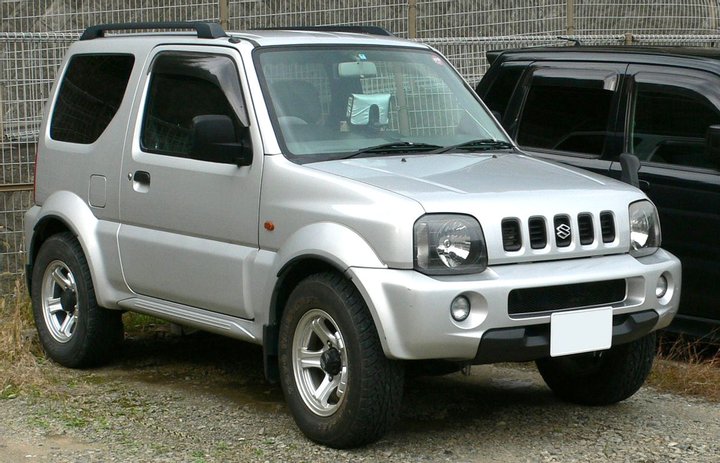 . For interest, we looked at the auto.ria website to find out how much such used cars cost, and found that the price starts from 6 thousand dollars and reaches more than 10 thousand, depending on the condition. Ruslan Baranetsky himself drives a Toyota Land Cruiser 2005, which is registered to his wife. 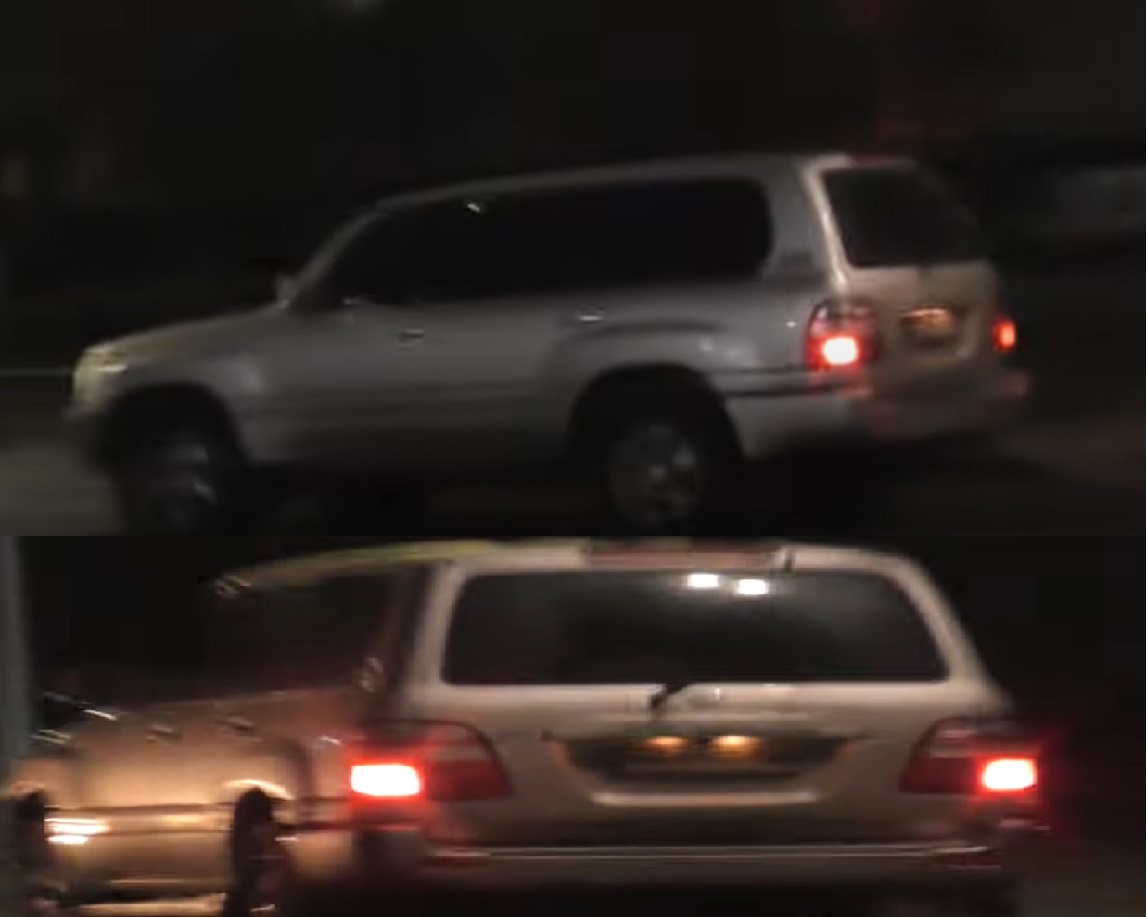 It was bought in 2017 for 200 thousand hryvnias. True, this price also does not correspond to the market. On the auto.ria website, we found prices from 420,000 to 740,000 hryvnias. Daughter uses VolksWagen Tiguan 2015. The car is registered to another person, so the purchase price, which was made in 2016, was not indicated. 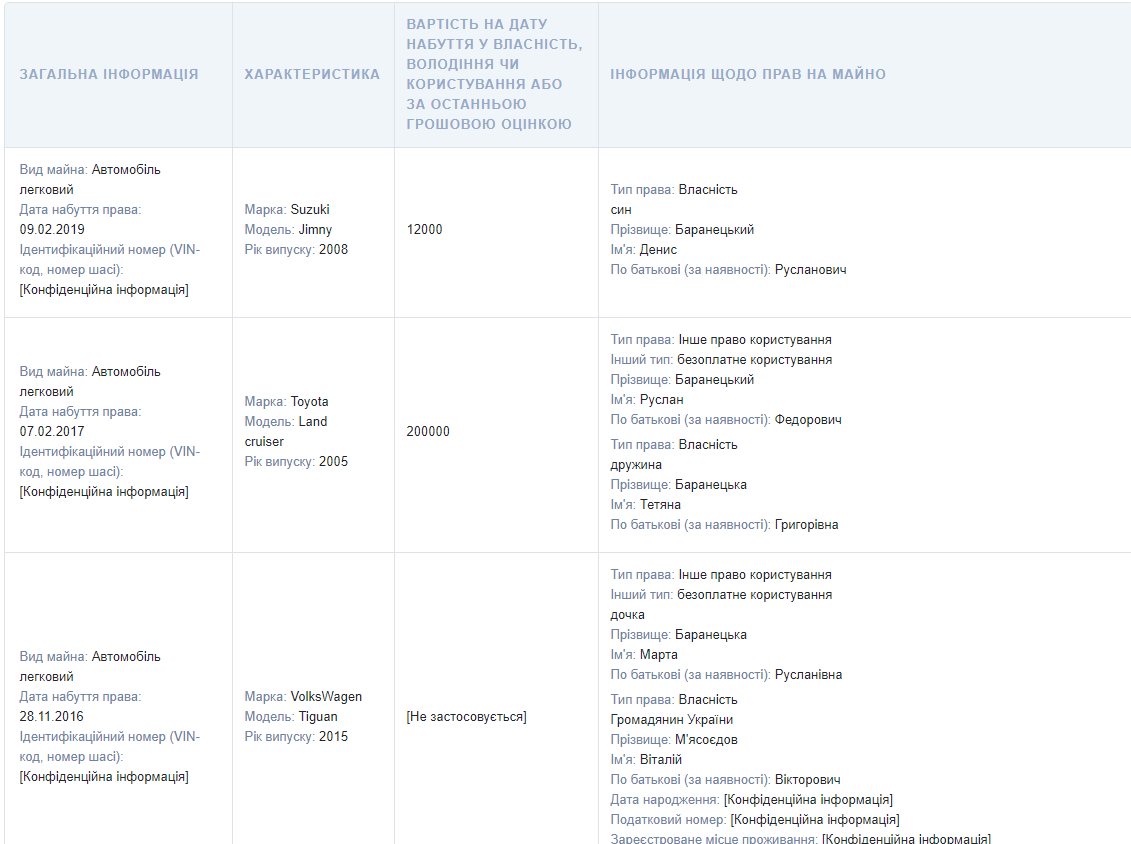 The spouses are shareholders of the tourist complex “Cheremosh”. Together, their shares are worth 4.78 million hryvnia. Business The wife of Baranetsky owns a beauty salon MAKHHIMA in Chernivtsi. According to YouControl, the authorized capital is 100 thousand. The son is a co-owner of the Lemon Brothers enterprise, which is engaged in wholesale trade in fruits and vegetables in Kyiv. 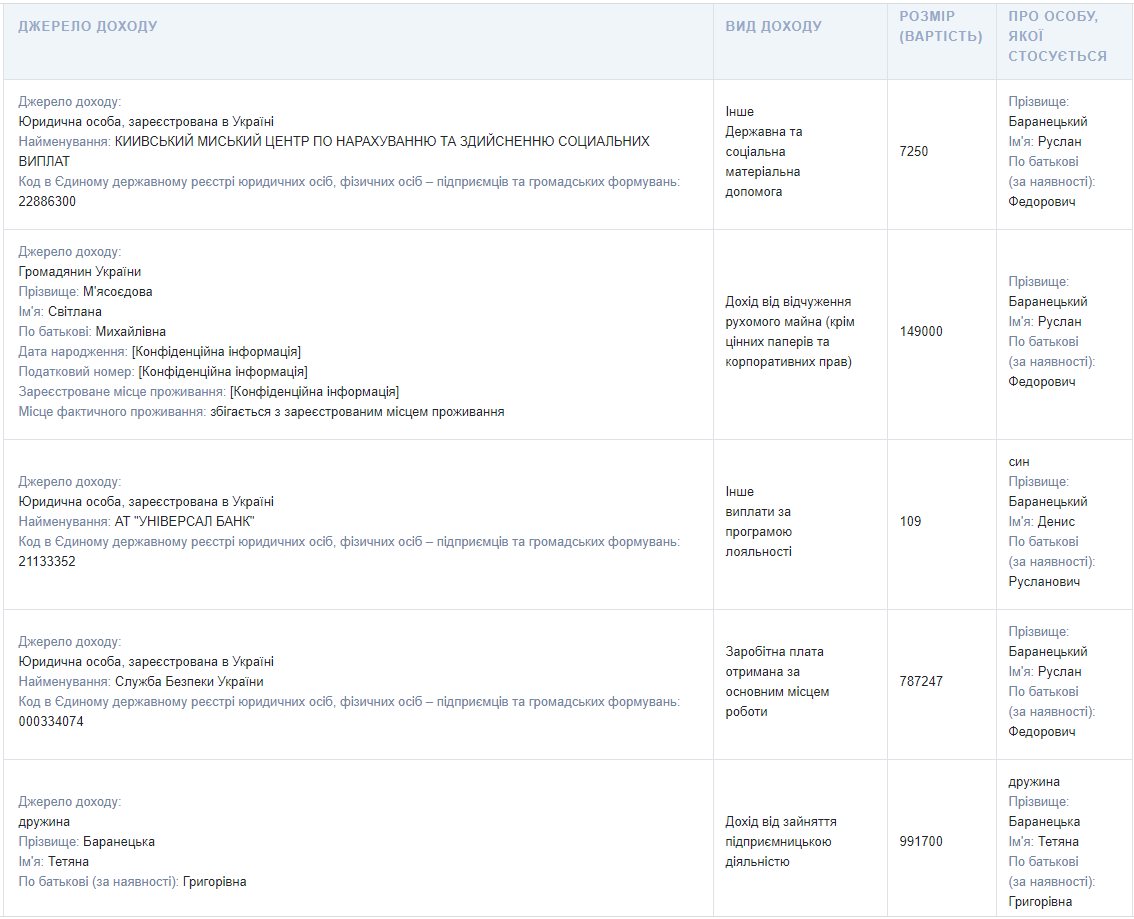 Daughter Marta earned the most. She works for Ukrtransgaz, Garant Group Law Firm, Kyiv Regional Bar Association, and is also engaged in independent legal services activities. Thus, she earned more than 1.5 million hryvnia in a year.

Ruslan Baranetsky, taking advantage of his position, illegally and without documented evidence, privatized part of the relict forest for cutting down trees. He also indicated false data in the declaration, and has close ties with the military prosecutor Anatoly Matios.